Under a Fiery Sky 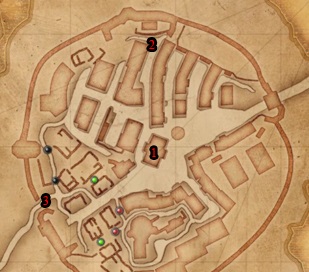 Under a Fiery Sky takes place in Old Vizima and is only available if you’ve taken the Neutral Path. Zoltan will give you this quest at the Vizima Dike.

Zoltan tells you that Shani has set up a Field Hospital (#1) in the center of Old Vizima. He wants you to see Shani safely escorted out of the area which has been overrun by Scoia’tael and Order soldiers.

When you first arrive in Old Vizima you’ll meet a pair of Nurses (#2). They want to be escorted to the hospital. You’re supposed to keep them safe but apparently they can’t be damaged so you won’t have to worry about them too much.

When you arrive at the hospital you’ll catch up with Shani but be interrupted by a soldier who will tell you about a ‘striga’ that has invaded the tower. Go and deal with the mutant and then come back to the hospital.

This time as you’re speaking with Shani you’ll be attacked first by a band of Scoia’tael and then by soldiers from the Order. I found the Scoia’tael harder to defeat because they have magic users on their side.

It’s time to get Shani out of here. Escort her out of the hospital and towards the exit to the Swamp Cemetery (#3). Along the way you’ll have to kill groups of creatures including Cemetaurs and Garkains. You’ll also need to use the Aard sign to break through a number of barricades.

Once you reach the exit you’ll be transported to the Swamp Cemetery where the quest will end.