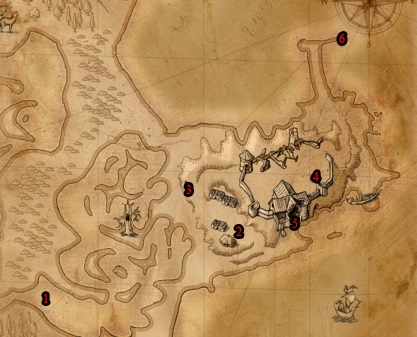 Sweet Revenge is spans most of Chapter 5 and involves hunting down and killing Azar Javed once and for all. King Foltest will ask you to go to Old Vizima to destroy the Salamandra gang.

This quest remains dormant until after you deal with the Striga in the Her Highness the Striga quest. Once you’ve completed that quest Velerad will give you a clue about going to the Old Manor.

As soon as you enter the area of the Old Manor you’ll be confronted by Count de Wett (#1), and some of his Knights, who’ll confess to working with the Salamandra. The only way through them is to kill them.

As you climb the hill towards the manor and reach the outskirts of the village you’ll be stopped by Azar Javed and a mutated White Rayla (#2). She now has the blinding ability but shouldn’t prove too much of a difficulty.

As you approach the Manor you’ll come across some tough resistance in the form of Armored Hounds and Greater Mutants. Kill them and then head down through one of the entrances to the Catacombs (#3, #4 or #5). The entry will depend on which path you have taken. Either Yaevinn, Siegfried or Triss will guide you to the entrance.

As you fight your way through the Catacombs you’ll run into Azar Javed twice but he’ll slip away each time. He’ll even leave behind a Koschkey for you to fight. The Koschkey is a large spider like creature that is capable of stunning you and knocking you down. It has a longer range then Geralt and will strike over your attacks.

Eventually you’ll find Azar Javed one last time once you reach his laboratory. Take whatever potions you need before the battle. If you haven’t already killed Berengar he’ll be here to help you with this fight in order to make up for his past mistakes.

Azar is susceptible to fire so the Igni sign works well. Make sure you’re also using the Steel Sword with the Strong Style. Once Azar is dead use the Mirror in the laboratory to find out who’s really behind the Salamandra gang.

It’s time to head back to Vizima so take the Boat (#6) back to the mainland to finish this quest.

Next: A Gnomish Device