Lara enters alone into the caves as the door shuts behind her. Follow the paw prints and watch out for arrows as they dart out from the walls. Either run and stop or jump over them to get through unscathed.

As you continue following the paw prints the screen will pan to the left, showing you the way you need to go. Don’t head up there yet. Keep running straight ahead for the first secret. 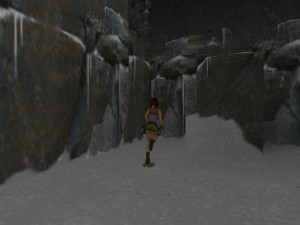 Keep running to the end of the cave until you find a rock with a sloped edge. Jump backwards onto the rock and then forwards while holding the action key to hang onto the ledge.

Once you climb up you’ll find the first secret area which contains a small medi pack.

Grab it and run back to the area where the camera panned left. Climb up the rocks and continue down the passage.

Head down the cave, taking out the bats with your pistol as you go. 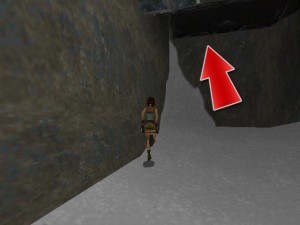 Once you’ve killed the bats veer to the left and at the end of the cave in the far right corner with a small snowdrift is the second secret.

Use the action key and press forwards to jump and grab onto the ledge.

Inside this secret area is another small medi pack.

Run back the way you came and turn left to continue heading further into the caves.

Follow the tunnels around to the left, slide down the rocks and then jump down a hole in the ground. It’s here that you’ll find your first switch. 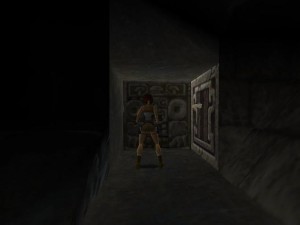 Walk up as close as you can to the switch on the right and press the action key. The door will open. Walk through and kill the bat that attacks.

To the right you’ll see a wooden gate. This can’t be opened so don’t worry about it. Instead continue heading straight and jump up the hole to the far left.

Follow the tunnel around until you come to a large open space with two wooden bridges. 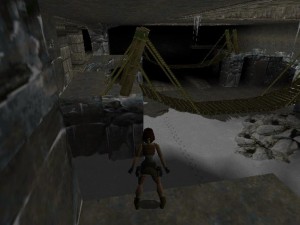 From the way you came in run under the bridges to the far left and climb up. Then run over the second bridge to the exit in the far right corner.

The next area has what appears to be a broken bridge with a bear roaming about down below. Shoot the bear before you drop down.

If you want all the kills, drop down and follow the path around, killing two bats as you go. There’s a pressure plate which opens a door and brings you back into the bridge area.

Head back to the bear area and this time jump over the broken bridge. To the left side, behind a pillar is a medi pack.

Run down the stairs into the vine area. As you get to the bottom of the stairs you’ll be attacked by two wolves.

Once you’ve killed them jump to the platform to the left for the third secret where you’ll find a large medi pack.

Run back out to the vine area and pull the switch on a platform to the right side of the room. This will open a door on the left. You’ll need to jump across two platforms to reach the open door.

Climb all the way up the stairs and kill the wolf at the top then drop down the platforms that collapse.

Here you’ll find a large open room. Run around anti-clickwise, jumping over the gap at the end. A wolf will attack and there will be a large medi pack you can pick up here as well.

Keep running around the top until you find the switch. Pull it then head out the door that opens at the bottom to complete the level.

Continue on to the City of Vilcabamba.