As soon as you walk through the door you’ll be attacked by 2 to 4 wolves, depending on how quickly they spot you. There is a fairly large area here of connected rooms and you don’t need to follow any particular order. I found it easiest to explore them from the left, going around anti-clockwise. In the middle of this area is a small pool that we’ll explore a little bit later.

At the very end you’ll be attacked by a wolf. Pick up the small medi pack hidden behind a plant at the end of the corridor. Continue to the right and kill the three bats that swoop at you. 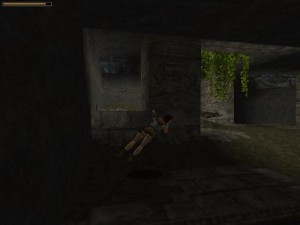 Keep running once more to the end of the corridor and kill the wolf that jumps out at you.

Keep to the left and run down the corridor. You’ll end up back at your starting position, having made one complete circle of this area.

Head to the center by the pool and to the right is an opening with a bear inside. Use a medi pack if you take too much damage.

Inside the room at the top level is another small medi pack.

Not far away from this room is a door with a switch next to it. Pull the switch and head through the door. Run up the stairs and jump over the ledge into the skull room. 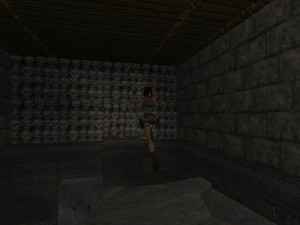 Drop down onto the collapsing platforms and run and jump to the small alcove where you can pick up a large medi pack.

If you miss this jump there is a block you can pull out to jump on. Otherwise push the block all the way through to the other room.

In this room kill the bat and pick up both the silver key and the gold idol.

The silver key is needed to get to the next part of this level and the gold idol is needed to complete the level.

Now jump on the block and jump up to a higher level. Take out the two bat which fly down from the roof. In a dark corner is a large medi pack.

Climb up onto the ledge, kill the bat and drop down. 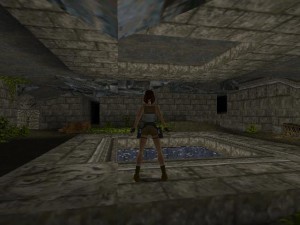 Having secured both keys it’s time to find some secrets. Go back to the center of this area and dive into the water.

Follow the tunnels down and when you come to a t-intersection turn right. Swim along quickly and when the tunnel opens out to another underwater area head to the far right.

Here you’ll find a switch. Swim straight up to it and pull the switch. This will open a hatch above you to secret 1. Swim up and take a breath.

Pull the switch but don’t go through the door which takes you back to the main area. Instead dive back down into the water. In the opposite corner of the underwater room is another switch hidden behind a column. 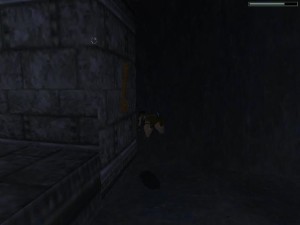 Pull the switch and head back down the corridor that you came from. Instead of going back up to the central pool continue forwards down the tunnel.

This will take you to a pool with blue walls. Get out and run around the the second secret. You’ll find a small medi pack and some magnum clips here.

Go back and dive into the pool, returning to the central pool where you came from. Now it’s time to head to the second part of the level.

Near to the central pool, past some vine-covered walls will be a door with a silver lock next to it. Use the silver key to open the door. 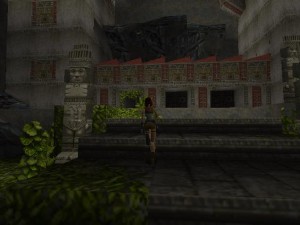 Run through the corridor, avoiding the arrows flying at you as you go. There are four wolves up ahead so go slowly and take them one or two at a time.

There is a house with three doors. Only the left one is open so head on through.

Run around the corridors, avoid the pool and run up the stairs instead. You’ll need to practice your jumping here.

Jump to the first platform then diagonally across to the second. Continue up the stairs. There’s another gap you need to cross so take a run up and jump across.

Jump down to the floor and enter the door to the right. Run down the corridor and once again avoid the pool. Run across the collapsing platforms and jump onto the ledge.

The rest of the collapsing platforms you don’t need to worry about. Simply walk up to the edge of the platform and jump straight up while holding the action key to grab onto the ledge above. 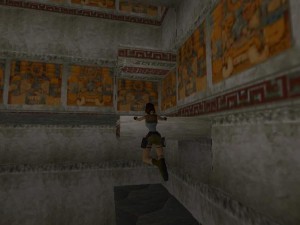 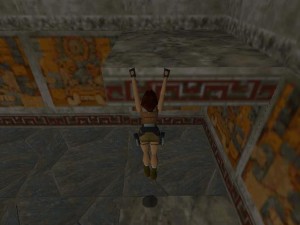 Turn 90 degrees to the right and jump up to the final ledge. A bat will attack as you exit into the hallway. Run up the steps and pull the switch which will open the center door. 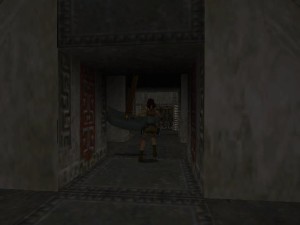 Jump down once more onto the rock ledge and then onto the red roof before falling to the floor.

Through the center door three blades will start swinging. Take them one at a time and stop between each one.

You’ll come to a gate with a switch. The switch doesn’t open the gate, instead it will open the floor, dropping you into a pool of water below.

Dive down immediately and swim to the next pool. A bear lurks about outside so stay in the water! 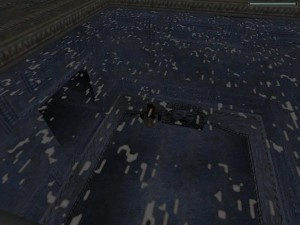 Instead of getting out of the water to face the bear dive back down and go through the underwater tunnel entrance you can see in the picture to the right.

Swim as far as you can and then up into another pool. Get out and run up the steps. Once you reach the top a switch will be over to the left.

Pull the switch which will open the gate. Run to the edge but don’t drop down. From here you can take shots at the bear without it hurting you.

Once you’ve killed the bear drop down and look to the right. The gate has opened and revealed a place for your golden idol. Don’t use it just yet! There’s still one more secret to find. 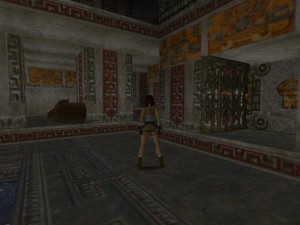 Run just to the left of the golden idol and up the stairs. Up the top is another switch which will stop the blades from swinging.

The opposite side of the switch is an open corridor which leads to the third secret. You’ll need to drop down twice to get there.

Pick up the uzi clips and head back the way you came. You can now use your gold idol to open the door to the next level, The Lost Valley.