Now we enter into the Tomb of Qualopec in order find the first piece of the Scion. Continue running down the tunnel until you enter the tomb. 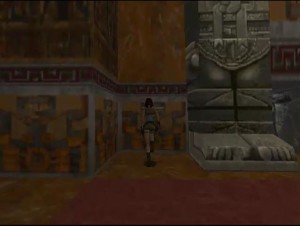 There are a number of exits here but continue running straight up the ramp until you trigger the boulder. Jump backwards and to the sides to escape its path. Now run back and pull the lever to the right of the entrance.

The lever will open a door to the right and a velociraptor will come charging out at you. Once you’ve killed it run down the hall into another room with three exits.

Room of the Face

As you run towards the lever the ground will give way revealing spikes beneath. Pull the lever and then do a standing jump over the spikes.

Room of the Bird 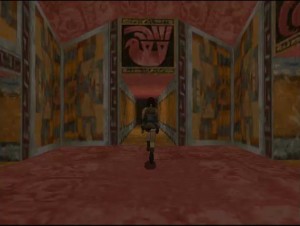 Run back to the intersection and continue forwards through the hallway with the bird above it.

Run up the stairs and around. There’s a lever at the top but just ignore it for now. Instead drop down to the area below and head out the hall to the left.

Run up the stairs and around until you come to a column with a picture of a bird on it. Stand on the column and turn to the right.

Take a standing jump and grab onto the ledge. Continue climbing up the ledges, run down the hall and drop down twice. 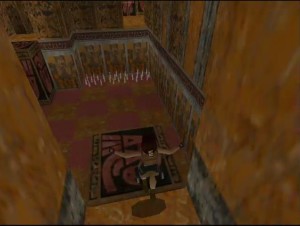 From here there are two ways to go. You want to go into the room with spikes. Don’t drop down just yet. Stand on the column and turn to the right.

Jump to grab the ledge and run down the hall. Pull the lever which will move one of the columns. Run back and drop down onto the column and then onto the floor.

Run back to the slight ramp where you can jump up to the room where we missed the lever earlier. Now we want to pull the lever which will move another column.

Run down the hall just to the right of the lever and climb up the ledges. Now the columns have moved into a position where you can jump across them. 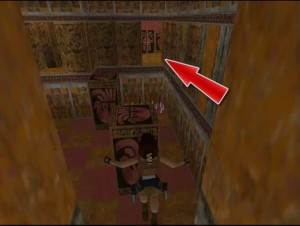 You can see in the picture to the right the way the columns should be and the room you need to get to at the end.

Take a running jump across the two columns and finally to the room at the end where you can pull the lever.

Drop down to the floor and then climb up the ledge which takes you out of the room back to the intersection.

A velociraptor has been released so drawn your guns and take it down.

Room of the Sun 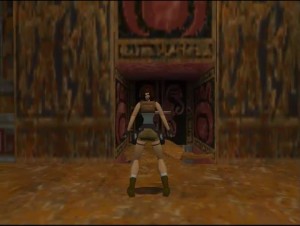 This is a trap. Don’t try and pull it. Instead walk onto the floor in front of it and jump back. The floor will drop away.

Drop down and take out the three wolves that attack. Keep jumping and rolling to avoid them and get into a position to shoot them.

Climb up the ramp and pull the block out once. Run around to the side of it and push it to the side once. This will reveal a hallway beyond.

You don’t need to run all the way back, just drop down the hole opposite the lever. This will take you back to the intersection. Head back to the starting area and run through the three, now open, gates. 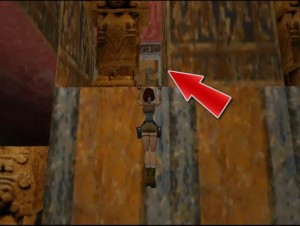 Run down the hall past the statues. Jump or roll over the arrows that shoot out. On the first stair on the left hand side is a secret.

Climb up to the ledge by the statue to the room beyond. There are a lot of breakaway tiles here and a shotgun in the corner.

Pick up the shotgun and then hang off the ledge. Traverse as far to the left as you can until your shadow is no longer over any spikes and drop down.

This is secret 2 and you’ll find some magnum clips. Walk through the spikes and climb up the ledge back to the main hallway. 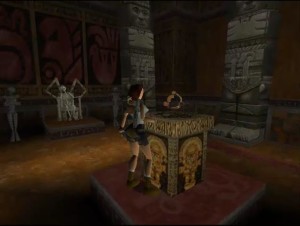 Run up the hallway and through the door. Keep going until you find the room holding a piece of the Scion (pictured right).

Grab the Scion and run out the gate to the right which opens as you get near it. Avoid the falling walls and continue down the caves straight ahead.

Pull out a gun and get ready to meet Larson. You can take him out first and dive down for the third secret.

If you dive down and head to the right there is a small opening. Follow the tunnel until you come out into another room for secret 3. Here you’ll find a large medi-pack and magnum clips.

Dive back through the tunnel and come up on the ledge where you first dove down. You can shoot Larson from here as he runs back and forth.

Once you’ve taken him out enjoy the final cut scene to end this level. Continue to St Francis’ Folly for level 5.