Run down the hall into the cave and shoot the crocodile in the water before diving in. Swim through into the other section where a lion will be waiting for you. Use the shotgun to kill him quickly before he attacks.

The entrance to the Colosseum is straight ahead. There’s no reason to go in unless you want another kill. Inside the entrance on the stairs to the left another lion will be waiting for you. Kill it and head back out. 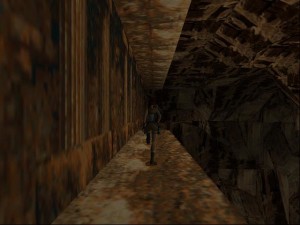 Outside the Colosseum run to the left side and a lion will attack. Run all the way to the back and climb up the rocks. You’ll be able to jump to the first level of the outside of the Colosseum from here. Follow the ledge all the way around the side and front until you find a large medi-pack at the very end.

Run all the way back to the start of the ledge and climb onto the slanted rock. Jump straight up to get up to the second level of the outside of the Colosseum. Once again run all the way around the side and front, jumping over the large gap as you go. 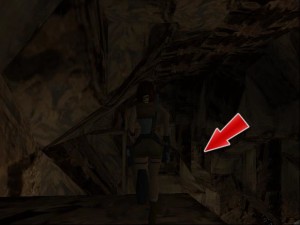 To get to the first secret you’ll need to jump across the side of the rock wall. The picture to the right shows where you need to get to.

First, slide down the rock until you land on a flat rock. Walk to the edge, face diagonally across to the next flat rock, hop back and do a running jump.

Do one more standing jump into the secret cave where you can pick up some shotgun shells.

To get back follow the process in reverse. Do a standing jump followed by a running jump. Jump into the cave opening in front of you to continue on with the level.

Follow the path around until you come to a crocodile pit. Shoot both the crocodiles before hopping down to pick up the small medi-pack. Climb on the slanted rock and climb up out of the pit. 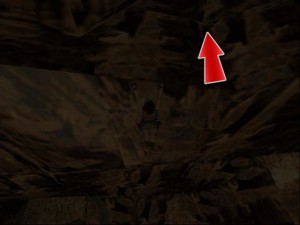 To cross the pit jump up to the crevice in the rock on the left-hand side. Grapple your way across the pit. About half way across you’ll be able to climb up into a cave entrance for the second secret.

Run in and pick up the shotgun shells before continuing across the pit.

Follow the path along and drop down. This is the entrance to the Colosseum that you may have gone in earlier. The lever opens the gate for access from the other side but you don’t need to worry about it now.

Follow the stairs up into the Colosseum. Don’t drop down yet. Pierre DuPont will attack once more. This time he comes in from the left. Shoot him and get out of sight so he can run away. 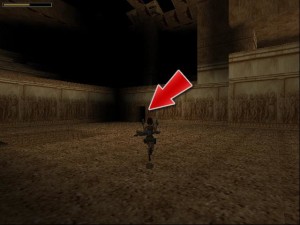 Kill the two lions and gorilla in the Colosseum before dropping down. Head to the door at the back left of the arena as shown in the picture to the right.

Slide down into the lion cages and kill the two lions down there. Pull the switch directly ahead and the second switch back towards the slide which opens the exit gate.

Head out into the pit and be prepared for another battle as three lions will have spawned in the arena. Once you have killed them head to the rocky area on the other side of the arena.

A lion is prowling about between the rocks so take it out before entering the next gate. 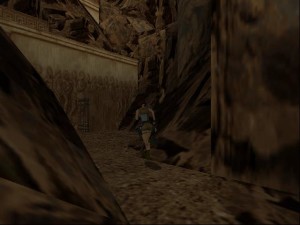 Slide down and run ahead to the second alcove on the right. You’ll see a grey pressure plate in the corner. Stand on it to open the gates. Once you step off the pressure plate you’ll have about 20 seconds so move quickly.

Before you leave the second room pick up the small medi-pack on the floor.

Run out of the grey door and down the hall to the spiked pit. Keep running to the right and climb up the rocks all the way to the top. If you climb to the back of the rocks here you’ll be able to pick up some shotgun shells. 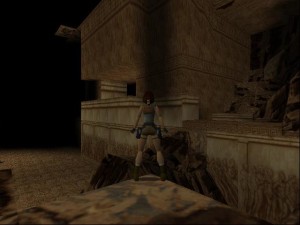 Position yourself as in the picture to the right, take a hop back and then a running jump to the rock outcropping.

From here jump up and then over to the balcony on the left. Two gorillas will be waiting for you inside.

Run in to the room and pull out the movable block twice to reveal a switch and a medi-pack behind it. Pull the switch/lever and you’ll see a door open.

We’ll have to come back here at the end of the level but for now run back out to the outskirts of the Colosseum arena. If you drop into the arena you can find a sloped rock you can climb up on just beyond the large rock pile.

The door that has opened is just beyond the large rock pile also. Run through and take out the bats who attack. As you run in a gate will close behind you and a boulder will start rolling down from ahead. Drop into the pit ahead of you until it passes overhead.

Climb back up and do a standing jump to get across the pit and continue along the hallway. At the top of the hallway is a lever that opens the second door. Slide down the hallway back into the Colosseum area.

Guess who’s back? Pierre DuPont. He just never gives up does he! Shoot him again until he runs away. 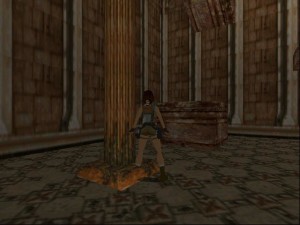 Continue around the edge of the arena until you come to the next door. There’s a secret here as well but you’ll need to be super quick to reach it.

To reach Secret 3 stand exactly where Lara is in the picture to the left.

Hop back and do a running jump onto the platform directly ahead. Flip to the right, flip backwards, flip to the left, jump ahead and then run into the secret room before the door closes.

If you make it you’ll be rewarded with two large medi-packs, the magnums and some uzi clips.

Head out of the secret room and do a running jump to the platform to the left with the lever. Pull the lever to open the third door.

Drop down and head out to the Colosseum area. Run to the left to the next open door. The door is up a little way so jump up to climb through this doorway.

Pull the lever and dive into the small pool. Follow the underwater tunnel along until you come out in another room. Pick up the small medi-pack and then push the movable block twice. Move to the other exposed side of the block and pull it once to reveal a secret rusty key.

Pick up the key, swim back to the first room and drop back into the Colosseum arena. Kill the gorilla that has spawned and head back to the balcony. You’ll need to enter the gate behind the rock pile to get there.

Once you’re in the balcony area run all the way to the back down the stairs to pick up the small medi-pack behind the door that is now open. Head back to the gate with the key hole and use the rusty key. 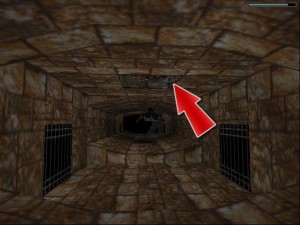 Dive down and exit the tunnel about half way through. There’s a crocodile swimming around here so you’ll need to move fast.

Climb up and pull the lever which will open the gate to exit this level.

Dive back down and continue through the tunnel to the Palace Midas.