Once you slide down the chute you’ll be somewhere in the base. Turn right and run down the ramp to the bottom. On the far side of the room is a Control Room and a Guard who controls a Claw. He’ll try to catch you with it if you’re in view.

Quickly run straight ahead and turn left to the lockers. Search the lockers for a Silver Key. Turn around to face away from the lockers and quickly run around the crates to the far right (from where you’re standing) corner of the room. 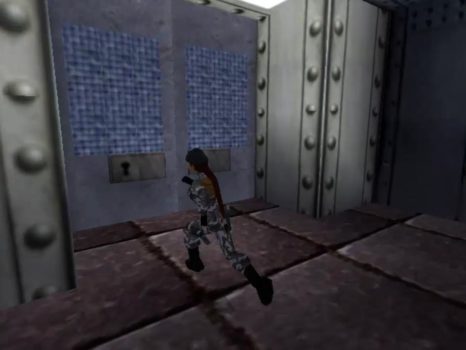 Use the Silver Key to unlock the door here. Run up the steps and shoot the 2 Soldiers through the windows. One of the Soldiers drops a Swipe Card. Search the lockers in this room for the Uzis.

Run back down the ramp to the room with crates. Run directly across to the other side of the room to the white door. Use the Swipe Card in the slot to open the door. 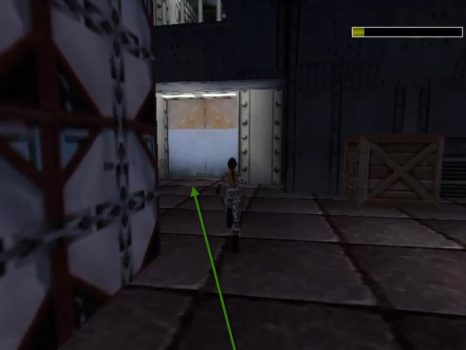 Kill the German Shepherd, run around the corner to the blocked passage and jump up to shoot the damaged vent on the right. Climb into the vent for Golden Rose #1.

Drop back out of the vent and run back to the room with crates. Run along the wall to the left to the other white door and use the Swipe Card on the slot to open the door. Run up the steps to the broken railing. You’ll need to make your way over the crates to the other side of the Control Room to get inside 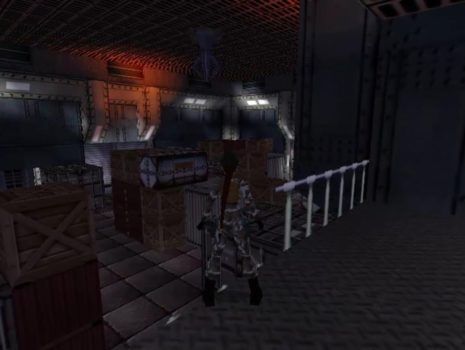 Search the lockers here for Uzi Clips and a Small Medipack. Press the Button to open the other exit, which can only be opened from this side.

Once more stand by the broken railing overlooking the crate room. Take a running jump diagonally to the right to the grey crate and another to the white crate in the center. If you want all of the loot continue forwards, diagonally across the room, and jump across to the white crate with a chain around it. Climb onto the higher crates for a Small Medipack.

Jump back to the crates in the center of the room and this time take a running jump to the crates diagonally to the left. Climb onto the highest crate for Uzi Clips.

Drop down to the floor and go through the roller doors that Lara broke open earlier.

At the far end of the tracks 2 Soldiers emerge. Take them both out and then follow the path to the left which leads outside. Climb onto the crate on the rail car and then onto the dangling crate. Take a running jump to the brown crate and then climb up to the left to pick up Golden Rose #2. 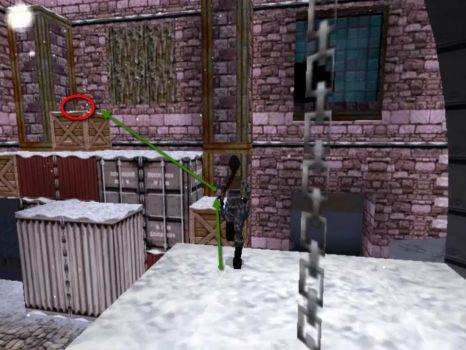 Drop down and use the Swipe Card on the slot near the white door just to the right of the brown crate you just jumped onto. Enter and run around the corner to some kind of machine. Kill the Soldier lurking at the back and take the Silver Key that he drops.

At the back of the machine you’ll notice one of the fuses is missing. Run back outside and then through the door you opened when you first came outside that leads back into the base.

Run across the tracks and into the passage on the other side. Head up the stairs and use the Silver Key on another door that leads to a walkway overlooking the submarine.

Safety drop to the ground and use the Swipe Card on the slot by the white door underneath the walkway. Enter into the bathroom and shoot the German Shepherd before it gets too close.

Search all of the lockers for Desert Eagle Clips, the Desert Eagle Pistol, a Fuse, Small Medipack, and Uzi Clips.

Head into the room with the shallow water and open the grate in the corner. Drop into the tunnel and follow it along. Take a right at the t-junction and continue swimming through the tunnel until you can pull up into a small room by the submarine. Grab Golden Rose #3 and then swim back through the tunnel to the bathroom.

Combine the Desert Eagle with the Laser Sight and then look for a corridor that leads to a closed door. Push the Button to open the door and go through it back to the tracks.

Go straight across the tracks and through the passage that leads outside. There are 2 Snipers in the windows. Hide by the hanging crate and take them both out. One is in a window opposite the submarine and the second is in a window on the wall to the right of the first.

Go through the passage under the window where the second sniper was located that leads to the machine room. Run to the back of the machine and place the Fuse in the empty slot. A door in the machine room will open closer to the entrance. As you make your way towards it a German Shepherd will attack. Kill it and then go through the door you just opened to press the Button. This moves the crane so you can jump across to the submarine.