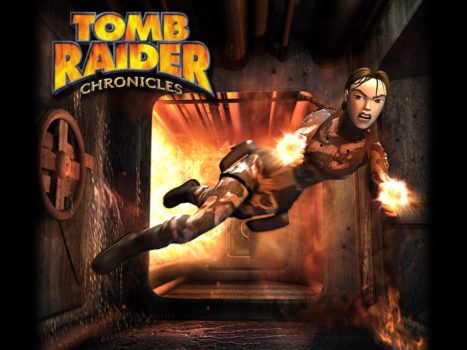 Tomb Raider Chronicles is the fifth instalment of the popular Tomb Raider series. It’s set just after the end of The Last Revelation where Lara is presumed dead. Three of Lara’s old associates recount stories from her past and you’ll get to play through each of them.

The first adventure takes place in the streets of Rome where Lara is on the hunt for the Philosopher’s Stone. The second takes place on a submarine where Lara is attempting to find the Spear of Destiny before the gang leader, Mafioso, can find it. The next is in Ireland where Lara travels to the Black Isle to investigate some supernatural happenings. The last adventure takes place inside a high-tech complex owned by the infamous Werner von Croy. Lara must infiltrate the complex and recover the Iris artefact.

Tomb Raider Chronicles uses many of the same controls as The Last Revelation and the graphics engine is largely the same. The new moves that Lara can use are tightrope walking, sumersaulting out of small crawlspaces and swinging around horizontal bars.