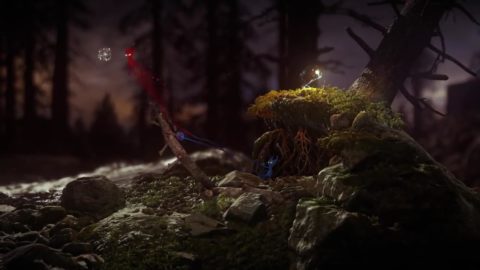 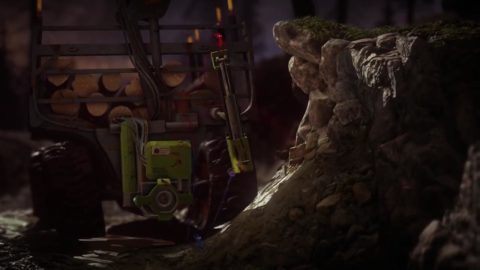 Jump across to the rock ledge and pull the other Yarny up. After the logs fall and the fire starts quickly run across to the right and jump up to the netting. Climb as high as you can and swing one Yarny over to the logs. From there jump over to Spark #2. 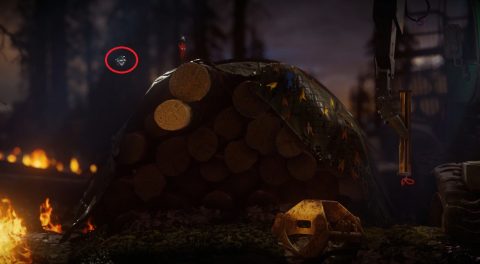 Separate the Yarnys and lasso the metal bar with one of them. Swing over to the net and climb up while simultaneously pulling up the bar. The other Yarny can jump onto the bar, off the truck arm and then swing over to the hood. 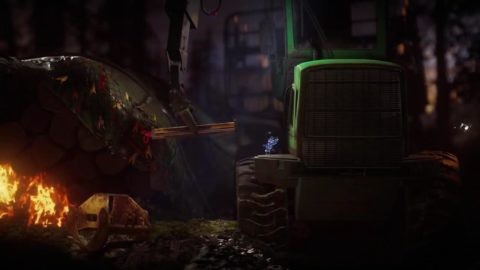 Make your way to the right. When you get to the dead tree tie a lasso around the base, hide in the hole to the left and pull over the tree. Follow the Wisp into the cave.

Inside the cave tie a bridge between the attach points at the bottom, bounce up lasso one of the higher knots. Swing around to the right and lasso the root so that you can pull the plant down. 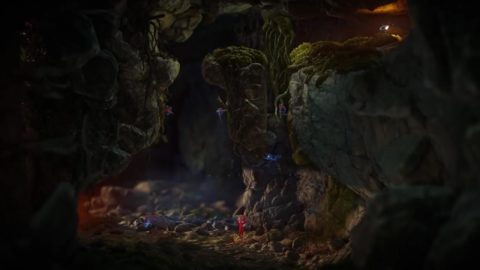 Tie a second bridge higher up and bounce up to the top. Pull the second Yarny up as well and head to the right.

Quickly run to the right to avoid the flame creature and then jump up the crevice. When you lasso the second branch it will break. Drop down after it and you’ll crash through the floor.

Climb up the nets and lasso your way up to the top of the crevice. Run to the right, lasso the stick and move it to the right so you can get down. 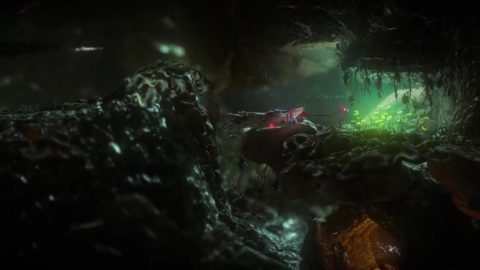 Run into the cave and separate the Yarnys. You’ll need to use both of them to distract the fire creature. Send one down to the left so the other can swing up to the right. Swing across to the left and then bring the second Yarny up as well. 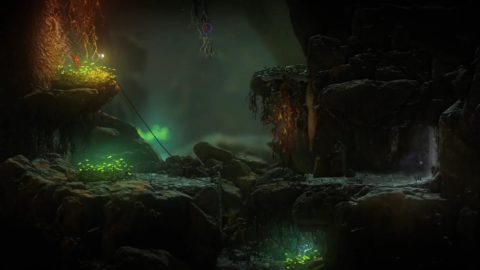 Climb up the roots through the hole at the top of the cave. You’ll be back outside again. Quickly jump across the hot embers. Swing across the branches, picking up Spark #2 between the burning branches. 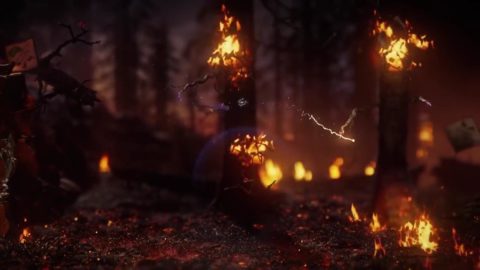 When you reach the fire use the 3 attach points on the branches to swing across to the other side. Jump up or across the branches quickly. They’ll collapse once you stand on them. Continue to the right, jump on the rock and off the tree stump, which will fall over.

Run over the tree stump and jump over to the other side. When you jump onto the next log it will start rolling. Stay on it as it rolls, avoiding the patches of fire. 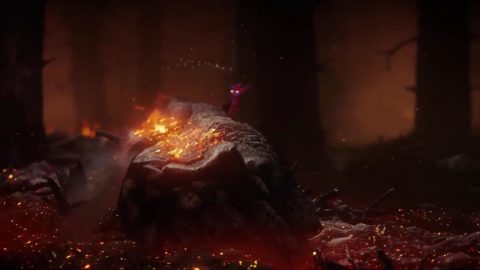 Follow the Wisp up the hill and tie a knot to the stick in front of the rock. Walk back to the left and the rock will start rolling down the hill. Quickly drop into the crevice and jump from side to side until the rock passes overhead. You can now jump back out and continue up the hill

Run across the next tree as it falls down, jump a few times over the hot embers and quickly lasso the next attach point to swing over to a little tree stump.

Slide down the cliff and jump off the tree before you reach the bottom. A log will slide down underneath you and put out the fire at the bottom. 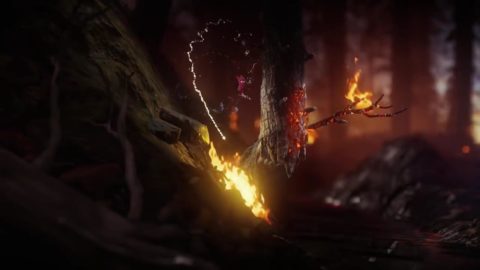 Lasso the next branch while standing on the log to pull it over so you can jump over it. 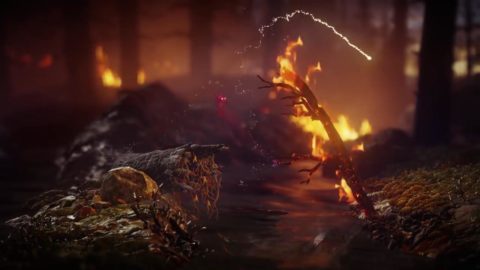 For the next puzzle you’ll need to bring the Yarnys to the top left and right of the screen. To reach the left sparkle push the broken bit of wood in the river all the way to the left. The second Yarny can then jump up to the left sparkle. 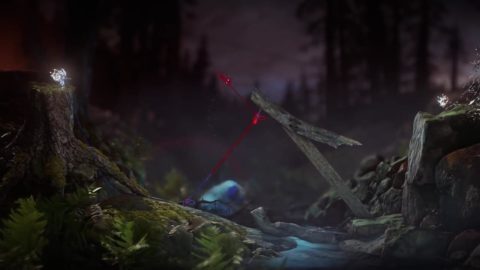 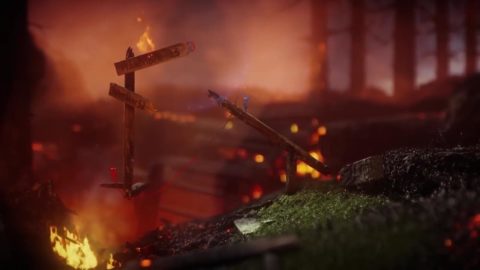 Jump across the burnt branches to the right but go quickly because they will collapse underneath you. Jump up to a stable bit of branch above and swing a Yarny across to the other side and up to the stable branch on the right. 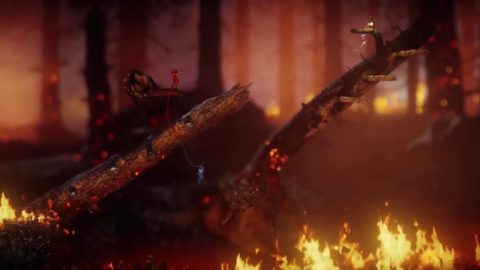 Swing the first Yarny across and over the tree stump to the right. Jump up the next few burnt branches to the last one which is stable. Separate Yarnys and swing them over the branches to the other side.

Follow the Wisp across the field towards the barn as a moose trots past in the background. Swing across the fire and run along the pallets. Perform another swing across to the other side and then jump up between the hay and the wall to the top of the hay. Jump off the wall and lasso the hook to be pulled up to the window where you’ll enter the barn.

Quickly run to the right to avoid the fire and move the box close to the large box by the wall so you can jump up. 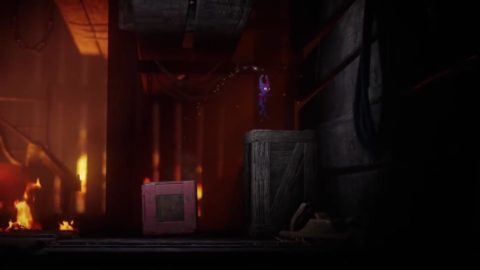 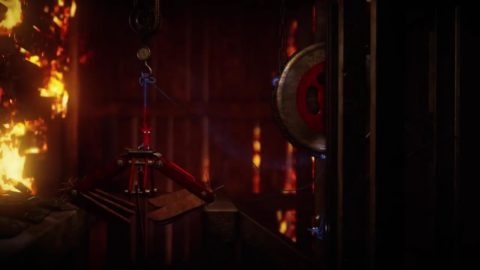 Follow the Wisp to the left, jumping over the burning log as the plank begins to collapse. Jump to lasso the nail and swing all the way around for Spark #3. 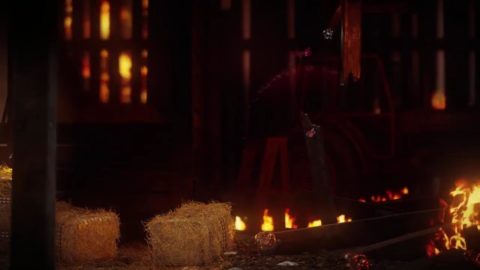 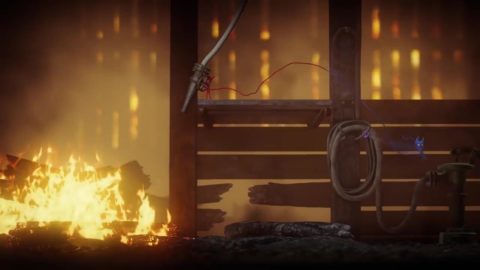 The horses will escape the barn and be saved. Follow the Wisp to the right to end the chapter.