The Shootin n’ Lootin boss is found on the boat at the end of the pier to the right of where you enter this world. Inside this boat is Captain Brineybeard and he has four different phases.

Captain Brineybeard is standing on the bow of his pirate’s ship. Watch out for the Barrels that will drop down from above and also his Octopus which he’ll use to shoot Pink Pellets at you. You can dodge or parry the pellets. Brineybeard can be hard to shoot because he stands in an elevated position. Lock your aim in a diagonal position or use a weapon such as the Chaser with automatic targeting.

For the second phase Captain Brineybeard’s friends will help out with the battle. There are 3 sea animals you need to watch out for.

The Shark: The shark can first be seen swimming past the pier before appearing from the left side of the screen. Make sure you’re as far right as possible, out of reach of the shark.

The Squid: The Squid will spill ink all over the screen, making it difficult to see. You’ll need to shoot the squid until he disappears before focusing your attention back on Captain Brineybeard. 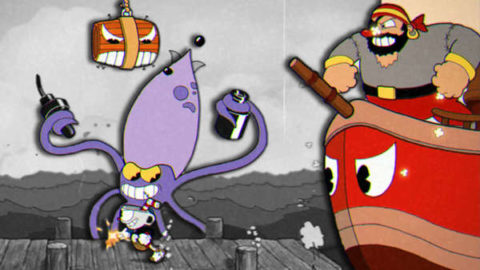 The Dog Fish: The third creature is the Dog Fish which will jump out of the water and move along the pier from right to left. You can shoot or jump over them. There are about 5 or 6 of them in total.

You’ll need to pay close attention to what creature Captain Brineybeard is summoning. If it’s the Squid you’ll need to kill it as quickly as possible before you lose vision of the screen. The other creatures you’ll just need to dodge.

The third phase is a culmination of the previous phases with the addition that the ship will begin shooting at you as well. You’ll still have to worry about the Barrel at the top of the screen, the Captain shooting from his Octopus and the sea creatures. When the ship is about to attack it will chew up it’s mouth, giving you a few seconds notice that it’s about to send out one of it’s canon balls which will roll along the pier.

You can damage the boss by shooting the red tonsil when the ship’s mouth is open. The boss seems to cycle between his two attacks, the Looping Fireballs and then the Laser. While you’re shooting and dodging keep an eye out for the Barrel which will still be trying to crush you. Keep shooting and eventually the boss will be destroyed.