Leave the tavern and go back out to the port. Click on the steps leading up to the Krystal. Enter into the door on the right with the red light next to it. Walk towards the double doors until the view changes and then turn around. Walk up either of the staircases on either side of the ship. Walk up a further set of stairs to the bridge.

Speak with Captain Obo and tell him you’ll help with the preparations. He’ll give you instructions for loading the coal and give you Captain Obo’s Code for the hangar. 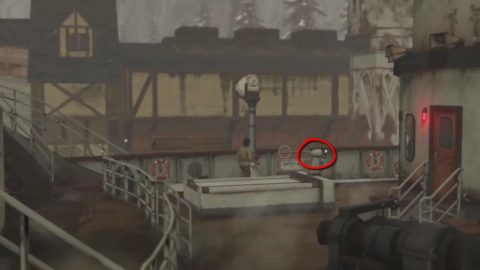 Head down the stairs back to the port. Click on the hangar door panel which is a little hard to see but I’ve circled it in the picture below. 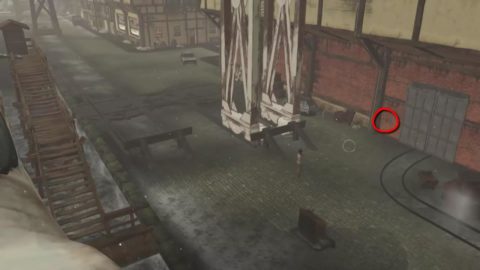 Have a look at Captain Obo’s Code which is 0 5 0 9 and type this into the control pad. The hangar doors will open.

Click on the cart and move it forwards a little bit. Turn around and grab the Crowbar leaning against the box and the Chute that was hidden behind the cart. 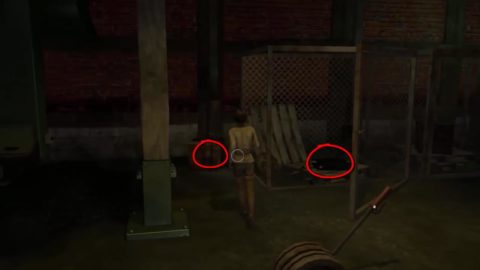 You can use the Crowbar to hit the green chutes to find out which one is filled with coal. The empty ones will have a hollow sound when you hit them. The chute filled with coal should be the third one along on the right. 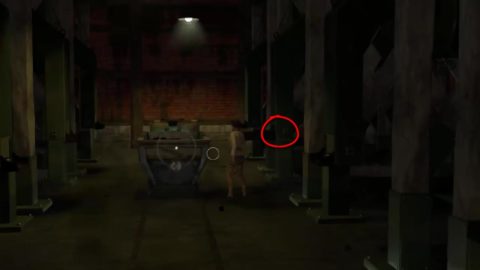 Move the Cart in line with the green chute filled with coal and attach the smaller Chute to the cart. You’ll need to be looking closely at the cart to attach the chute. Press the button on the side of the chute to dispense the coal.

If you try to move the coal cart now it’ll be too heavy. First you’ll need to run back and pull the large lever to change the rail tracks so that they lead outside.

At the other end of the hangar is a little buggy. Get on it and use the knife on the top button. Click on it and pull it off. 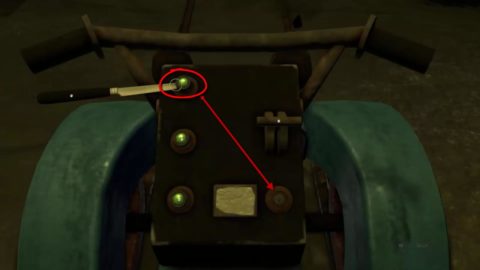 Grab the loose Button and use it on the bottom control which is missing a button. Press it and push the throttle forwards to move forwards. You’ll drive the coal cart out of the hangar.

Click on the base of the crane and once again use the code to get access. The code is 0509. A ladder will descend. Climb up the ladder into the crane controls. 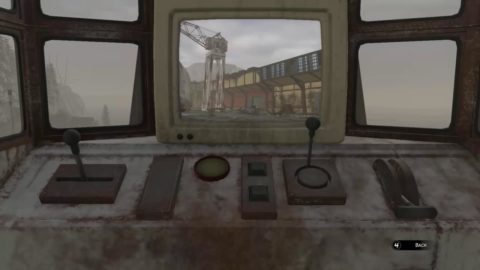 Now that the coal cart has been lifted up you need to bring it to the boat. Change your viewscreen by clicking on the right little button on the monitor.

Click the monitor buttons until you have a view of the deck of the ship.

Pull the circular right gear to the right to swing the crane around so that it’s over the boat. Press the bottom black button to lower the coal.

Hopefully that was clear enough and you’re able to get the coal into the Krystal. Captain Obo will tell you that you’ve done a good job but he still needs to fill the water tank.

Walk up the wooden steps to board the Krystal. Take a look at the pipe just in front of the cargo hold. 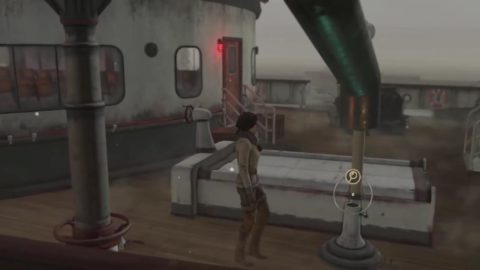 Leave the Krystal. Walk up to the north and climb the ladder to the water tower. Pull the lever around the side to get the water flowing into the Krystal’s water tank.

Climb back down the ladder and board the Krystal. Head back up to the bridge and speak with Captain Obo. He’s lost the ignition key! Tell him to relax and he’ll remember what happened to it. Ask him about everything and then leave the Krystal.

Make your way back to Steiner’s shop. Sarah asks you how things are going. Unfortunately Steiner has gone to take the prosthetic to Kurk. Tell Sarah you need a duplicate key and she’ll give you a Crank.

Walk downstairs, take a closer look at the model and flick the switch to turn on the light. Look at the lock at the front of the model case and use the Crank to open the case. 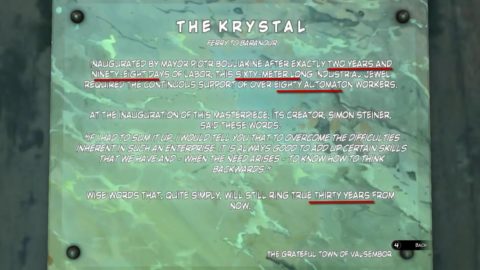 Take a closer look at the side of the model and turn the dial to each of the numbers in turn. As you enter in the code one by one the anchor will drop lower and lower. If you get it wrong the anchor will raise and you’ll need to start from the beginning.

Take a look at the counter to the left of the projector and grab a Key Blank from the little box on the lower shelf. 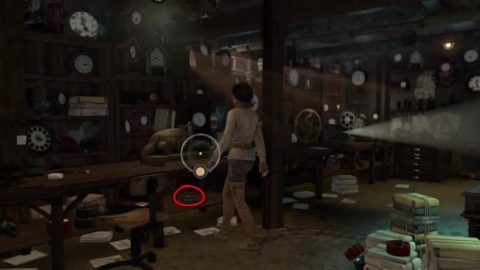 Now for duplicating the key into a larger size. Look at the tan-colored mechanism on the top. This is a key maker. 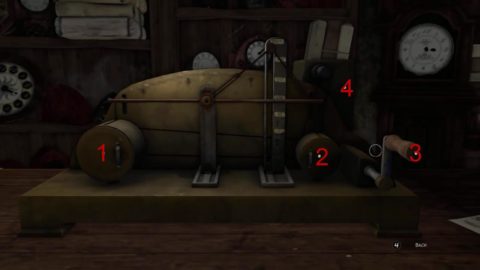 Open the cylinder #1 and place the Miniature Ignition Key inside. Flick the switch to lock the miniature key in place. Close the cylinder.

Leave the store and run back to the Krystal. Head up to the bridge and use the Krystal Ignition Key on the ignition to the left of the wheel. Captain Obo will come back to congratulate you but there’s still the matter of opening the gates so that the Krystal can sail out to sea. 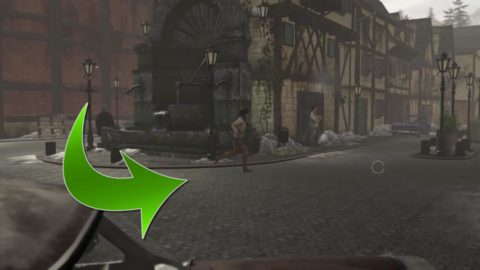 Follow the street around and walk up the steps. Run to the left and you’ll see a number of people protesting. Speak to the lady at the back of the crowd to find out what’s going on.

Walk up the steps and speak with the Mayor. Ask him to open the locks. Tell him that you want to take the Youkols with you. He’ll refuse but tell him to “think about the elections”. He’ll agree but the port locks need to be opened manually! He’ll give you the Superintendents Notice.

Run all the way back to the Krystal and speak with Captain Obo on the bridge. Tell him “I have to dive for it”. He’ll tell you that all of the equipment is in the shed at the end of the seawall. Talk to him about everything.

Leave the Krystal and run to the right. Keep following the path around the edge of the water until you come to the lighthouse with the shed beside it. Captain Obo will be waiting here for you. 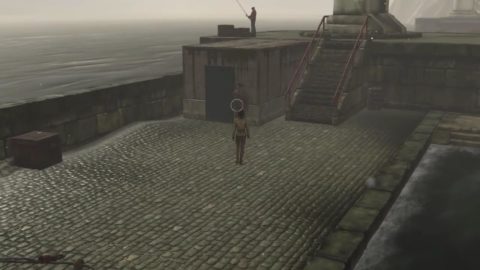 Click on the door and go into the shed. Pick up the Empty Air Bottles. Look at the clothes and move some of them aside so that you can grab the Diving Suite. Grab the Diving Helmet at the back and then take a look at the controls to the left.

Look closely at the air dispenser on the left and place the Empty Air Bottles underneath. Go back and look at the gauge to the top left. 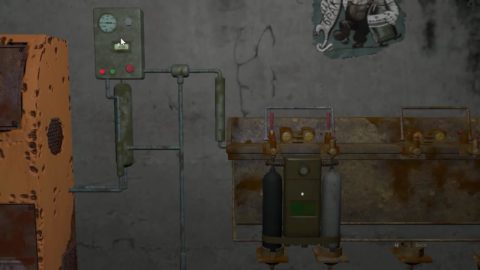 Turn the little cog to the right of the oxygen gauge until it points to 180. Press the green button to turn it on.

Look back at the Empty Air bottles and click on the grey bar above to lock the bottles into place. Pull each of the red levers to fill both of the bottles. You’ll now have Full Air Bottles. Walk into the changing room to get changed into your Diving Suite.

After the cut-scene you’ll be underwater. Run to the right and pick up the Large Cog off the sea floor. 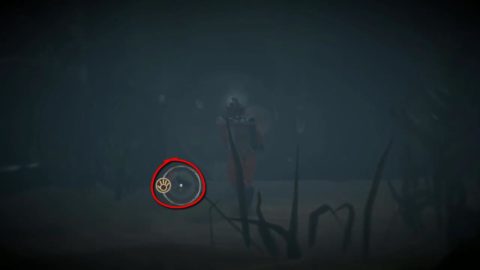 Also pick up the Square Key on the other side of the hatch. Take a look at the gate mechanism and pick up the Stacked Gearwheel and the Cog that have fallen down.

Place the Large Cog on the top left, the Cog on the top right and the Stacked Gearwheel on the bottom position. You’ll still need a chain to get this working and there is another hatch on the other side of the lock.

Run along the wall to the right to the other gate mechanism. Use the Square Key on the lock and open the hatch. Turn the wheel to remove the bar and then pull the lever on the left to open this side of the lock.

Run back to the left and go out the gate you just opened. You’re looking for a small sunken ship. Among the debris you’ll find a Chain. Come back inside the lock and run to the left to the first gate mechanism. Place the Chain around the Stacked Gearwheel and then turn the wheel to remove the bar. 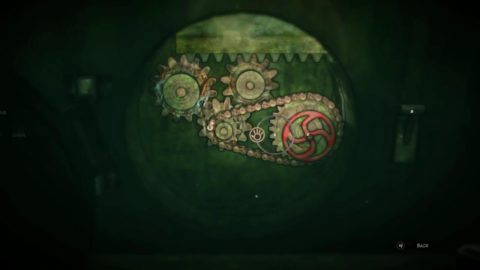 Pull the lever to open the gate and watch the cut-scene.