The Youkols have set up camp for the night. Walk to the right and you’ll be given a Yurt of your won. Walk towards the bonfire and speak with Kurk and the Shaman. Speak with them about everything.

Walk up towards the stadium but don’t go in. Instead open the gates to the right of the stadium and run around the side. Walk up the steps to the north and follow the path around to the top. Continue through the graveyard. You can read some of the inscriptions on the gravestones as you walk along. 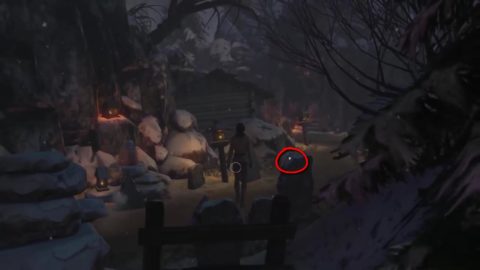 Continue towards the log cabin and head inside the lit cave to the left. Look at the gravestone and then grab the Youkol Lens 01 from the stone above the gravestone. 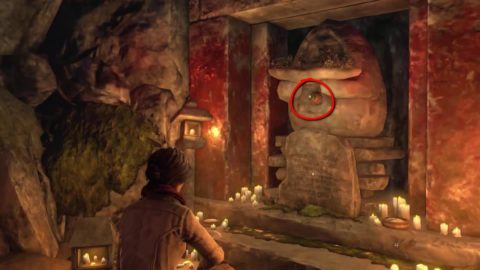 Leave the small cave and knock on the log cabin door. A lady will interrupt you reading an ancient Youkol manuscript. Tell her “The Youkols are my people”. She’s a daughter of one of the leaders of the Youkols. After the conversation she’ll give you the Youkol Journal.

Run back to the bonfire and speak with Kurk. Open your inventory and read the now Translated Youkol Manuscript. Take note of the shape of the Glyphs.

Continue walking down the red carpet to the right and go down the escalator at the end. Take a look at the base of the red chair and open the panel at the front.

Look at the Translated Youkol Manuscript again and have a look at the Glyphs. It says that the joining of Mourning, Pain, Sacrifice and Death gave rise to another spirit, that of Madness.

Now this chair glyph puzzle is very confusing because there are 5 glyph symbols but 6 parts on the chair puzzle and I’m still not sure why they’re in the order that they’re in. 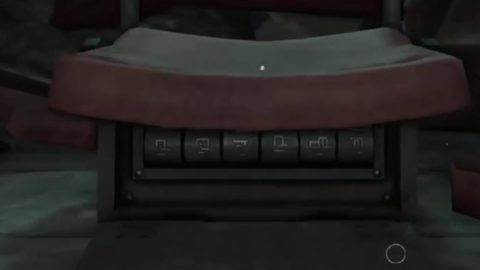 Once you have it right the seat of the chair will lift up and you can grab the Youkol Lens 02.

Walk down the stairs behind you and go through the gate at the end. Open another set of gates to your right. Follow the stadium all the way around to the left and take a left between the trees, shown in the picture below. 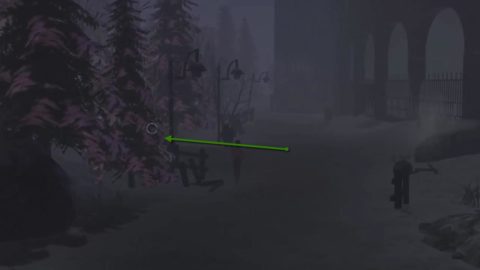 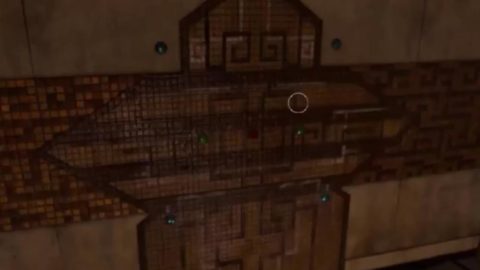 Turn the mirrors until the beams are directed to the next mirror along and finally to the gemstone on the temple door. The final placement should look like the picture below. Start with one color and then proceed to the next. Some mirrors will split the beams in two so you’ll need to direct both beams towards the door.

The last mirror with the red beam (circled in red) has not yet been directed towards the temple door in the center as a cut-scene plays as soon as it is completed (click on the picture for a larger version). 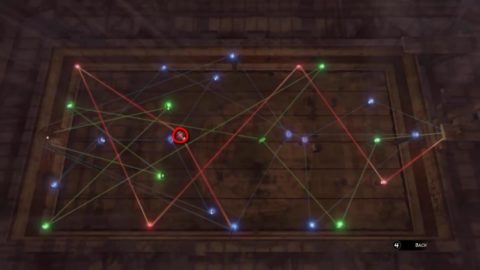 Climb down the diving platform and then climb into the pool using the ladder on the left side. Enter the temple and enjoy the ritual with the Youkols.

Next: Crossing the Bridge