Back to The Sexy Brutale

At the start of the day the door back to the south will be closed. Instead head to the theater to the north and enter the trap. Check out the trapdoor and use Greyson’s special ability to open it. Climb down the ladder and make your way through the rooms to a ladder back up.

Climb up the ladder to a wine storage room and head out the door. Go through the secret door to the south and you’ll have a vision of the two guests you need to save, Thanos and Aurum. The secret door leads back to the Poison Bar.

Walk to the south and use the Clock to reset your spawn point. Restart the day so you can follow either Thanos or Aurum at the start of the day.

Aurum: Enters the Poison Bar and goes through the door to the north. Before he arrives quickly light the candle and hide in the closet. The ghosts will mention the password so you can follow Aurum through to the area behind the bar.

Head up the stairs and explore all the rooms up here. You’ll find a Winding Key for a Clock that we’ll come to later and also the balcony. From the edge of the balcony use Tequila’s ability to shatter the chandelier. A Candle will drop onto the table below. 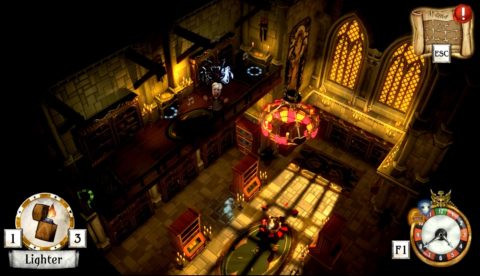 Head back down to the library and light the candle. Speak to the ghost and he’ll tell you about a secret passage that appears when you pull one of the books. Pulling the book moves a bookcase out of the way so you can access the new area. Go through the secret door and then south twice to find the next Clock. Use the Winding Key on the clock and set your spawn point here.

At the beginning of the day Thanos tells Aurum to change all of the statues to Spades. There are four statues throughout the hotel but Aurum only pulls the lever on two of them, the one behind the bar and the one to the west of the ballroom. There’s also one at the entrance and one to the west of the large lift where Thanos is waiting for Aurum.

A staff member changes the statue to the east of the lift to Spades and breaks off the arm so it can’t be changed to anything else. He then enters the dining room and throws it in the dumb waiter. To see where he puts it you need to enter the dining room before him and open the curtain. Quickly run around to the room on the other side of the wall and spy through the statue. 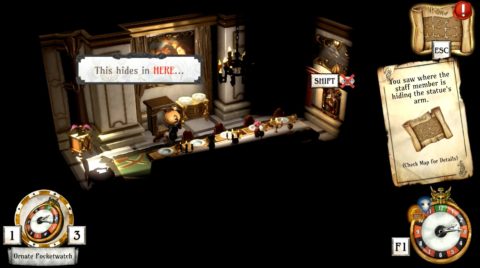 You’ll now be able to search the dumb waiter the next time you enter.

Thanos slowly wanders from the ballroom to the room with the large lift. Aurum meets him there and they enter the lift together. The lift isn’t working and they get incinerated instead.

You need to make sure the four statues are set to Hearts before  Aurum and Thanos enter the incinerator/lift. The statue at the lobby entrance is already set to Hearts so you don’t need to worry about it.

The statue to the east of the incinerator/lift is the difficult one. Run back to the dining room and grab the Arm out of the dumb waiter. Run to the piano room to the south and attach the Arm to the statue. Pull the arm until the Hearts show up.

Just one more to go. Quickly head pack to the path that Aurum takes and once he’s gone through pull the arm on the statue to the west of the ballroom until it also comes up as Hearts. The day should skip to the end and the two of them will be saved.

When you pick up Thanos’ mask you’ll have the ability to learn more lore about many of the rooms in the mansion.