Back to The Sexy Brutale

After saving Tequila the Lady in Red will push you through the broken window and you’ll land in the theater area below.

To the north of your spawn point is the large theater room. First head to the right to the hall and go right again. Look through the door to the north and you should see Greyson breaking into a safe. 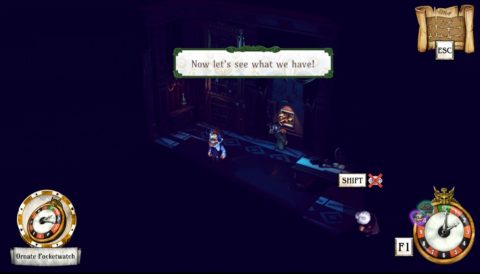 After not finding what they were looking for they’ll head off in different directions. For the first day you can enter the main theater room and watch the show. If you’re standing off the stage they won’t be able to see you. It’s a rather gruesome ending but basically Greyson gets caught in the cage and Red runs around trying to save him.

Two staff members are off the stage to the left and watch part of the show through the door. When Greyson investigates the egg one of them sneaks onto the stage and closes the cage door to lock him inside.

Follow Red and Greyson as they break into the safe. Search the safe after they’ve left the room to find a Lighter. Head back to the starting room with the Clock and light the Candle.

At some point during the day a Ghost will enter. When you talk to the ghost he’ll tell you there’s a circuit breaker behind the bookshelf in the north-east library.

Go to the north-east library and move the bookshelf. You’ll activate the circuit breaker and the switch in this room will turn red. 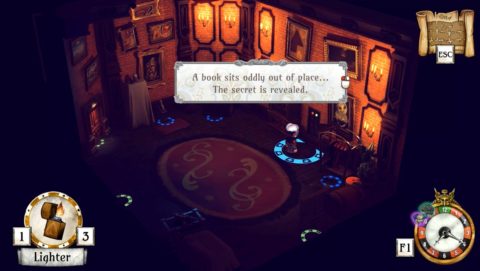 If you pull the switch it will have no effect. There’s another switch room on the other side of the theater. Both switches need to be pulled at the same time.

Wait for the show to begin. When Red runs around wildly he’ll start pulling the switch in the north-east room from between 9 pm to 10 pm. Hide in the closet of the north-west room, or in a nearby room, until after 9 pm and then pull the switch. You may need to do it a few times to time it with Red.

Once both switches have been pulled together the trap will deactivate and both Red and Greyson will be saved. When you pick up Greyson’s mask you’ll learn the skill of picking locks.