The Hunter of Shadows

Cenarius goes on the rampage when he sees the orc bases and destroys three of the smaller encampments. This leaves you with your main base to the south east of the map.

The Chaos Well – Find the source of Cenarius power and defeat the Satyrs guarding the pool.

1) A Furbolg on the path to the north drops an Anti-Magic Potion.

2) Another Furbolg along the same path drops Claws of Attack +9.

3) A Periapt of Health is dropped from one of the Satyrs guarding the Waygate.

4) A Potion of Greater Healing from a Satyr on the other side of the Waygate.

5) The Satyr Pyromancer drops the Orb of Fire.

6) One of the Satyrs guarding the Chaos Well drops a Ring of Protection +3.

The Hunter of Shadows Walkthrough 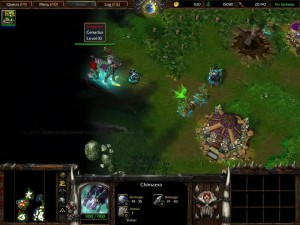 When you begin Cenarius is destroying the outlying orc bases. There’s nothing you can do about this. You might be able to save a Peon or two if you send them running away immediately. Otherwise all is lost but don’t worry about it.

For now you have a short amount of time to build up your defenses but Cenarius will eventually send forces out to your base on the other side of the river. There are tow crossings, one to the south and the other to the north.

The Spirit Lodge can be used to produce Troll Witch Doctors. They can cast Sentry Wards on the two paths crossing the river so you’ll have advanced warning of when the enemy is approaching.

Finding the Source of Power

You can’t defeat Cenarius just yet so don’t even try. Instead head to the north and break through the trees with a catapult. The path to the north is long and dangerous and you’ll need to find the Chaos Well while defending your base from the elves at the same time.

Just past the tree barrier to the north is a Goblin Merchant selling the usual scrolls and potions.

One of the Furbolgs further along the path drops an Anti-Magic Potion. Another Furbolg drops Claws of Attack +9! 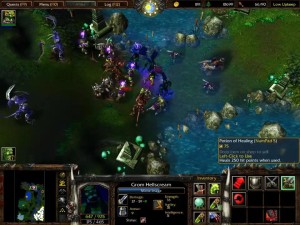 Now Satyrs guard the Waygate leading to the Chaos Well. You don’t want to mess with these guys without a strong force. Grom and his Blade Storm should be leading the charge with upgraded Grunts and a catapult or two.

One of the Satyrs will drop a Periapt of Health.

The Waygate drops you off further west near a Satyr who drops a Potion of Greater Healing.

A Satyr Pyromancer now blocks the path. Use the Blade Storm to cut him to pieces and pick up the Orb of Fire that he drops.

You’re not done yet! Further up are Giant Skeleton Warriors. When you’ve killed them you will get some relief with a Fountain of Health a little further along the path.

Continue following the path as it snakes around for your final battle with the Satyrs guarding the Chaos Well. One of the Satyrs will drop a Ring of Protection +3. 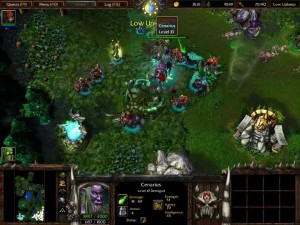 After drinking from the Chaos Well your orcs will be upgraded to Chaos Orcs. They deal full damage to enemy units including Cenarius with his Divine Armor.

Charge groups of Chaos Orcs across the river to the light blue elf base in the south west. When they are in trouble Cenarius will appear. Slay him with your Chaos Orcs to win the mission.

Continue to the next mission, Where Wyverns Dare.