Cry of the Warsong

After trekking northwards for days Thrall finally reaches the foot of the Stonetalon Mountains. It’s here that you meet Grom Hellscream for the first time battling some humans. This is the first Orc mission where you actually get to build a base.

Establish a Base – You must build a Great Hall.

Secure the Zeppelins – Destroy all enemy units at the Goblin Laboratory and return the two Zeppelins to your base.

Pacify Humans – Destroy all of the human bases.

1) Potion of Healing dropped by a Centaur guarding the way to the Goblin Laboratory.

3) Scroll of Healing either dropped by a Centaur near Khan or just on the ground near the huts.

4) The Harpy Queen drops a Circlet of Nobility.

Cry of the Warsong Walkthrough

Set a Peon to work building your Great Hall. This completes the first main quest! Grom is to your north with the purple base. Build some Orc Burrows to increase your food supply followed by a  Barracks and War Mill. At this point you’ll be told about a Goblin Laboratory to the north and given the location.

Grom will send out forces to attack the nearby human encampments. Luckily he will also explore parts of the map for you. Soon after Grom attacks you’ll be attacked by the blue humans. Build Towers around the perimeter of your base to keep the humans at bay.

Grom won’t be able to defeat any of the human bases by himself but he is useful at providing an initial rush. If you follow along behind him with a second wave attack it will make it a lot easier to take down the human camps. There are four human camps and Grom will attack them all one by one. 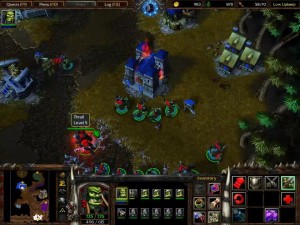 After you’ve set up your Towers prepare a force to follow along behind Grom. Make sure you have as many of the unit upgrades as you can. Your force should include at least one Catapult, Troll Headhunters, a Kodo Beast, Grunts and Thrall.

In the pic to the left my forces have been sent to the blue base. Grom is still alive and causing havoc. The orc forces have taken down the towers and are now working on destroying the human Barracks which will severely cripple the blue base.

Repeat this procedure with all of the human bases. Let Grom and his forces take the brunt of the attack and sweep in once his forces have weakened each human base.

With the human bases clear all that’s left is to find the Goblin Laboratory and bring back the Zeppelins. Centaurs guard the way to the Laboratory. One of them drops a Potion of Healing.

Further along the path is the great Centaur Khan. Remember he will bring himself back to life. When killed for the last time he drops the Gauntlets of Ogre Strength +3. A Scroll of Healing is near the huts just ahead.

Lastly you will need a force of Troll Headhunters or Raiders to take on the Harpies. The Harpy Queen drops the Circlet of Nobility which adds +2 to strength, agility and intelligence.

Buy the two Zeppelins from the Laboratory and fly them back to your base to win the mission. Continue to chapter 4, The Spirits of Ashenvale.