Now we head back to Thrall and Cairne in their search for the Oracle. Unfortunately pesky humans are guarding the summit of Stonetalon Peak.

Stonetalon Peak – Destroy the Human base that guards the peak.

Wyverns – Find the Wyverns and save them from the Harpies.

Defiled Fountain – Kill the Centaur Khan and return the Glyph of Purification to restore the Fountain.

1) A Razormane to the west drops a Health Stone.

2) The the north of the first Razormane group is another that drops a Periapt of Vitality.

3) Pendant of Mana from the Harpy Queen. 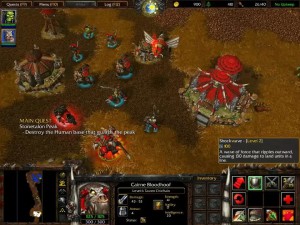 Stonetalon Peak is directly to the north of your base camp. You’ll need flying units and Zeppelins to get up there and there’s plenty of trouble from other Human bases on the lower level.

You can either head straight for the blue base guarding the Peak or save the Wyverns and clear out the other Human bases first.

I choose the second option although this may have taken more time. You have two heroes now so you have the option of keeping one by the base camp while sending the other out to explore.

Head across to the west and then north to find the Harpies. Send in a group of Troll Headhunters with your heroes to take them down. Once you kill them, 6 Wyverns will break out of their cages and join your forces. You can now produce more Wyverns from the Bestiary.

To complete this quest head to the north just before Stonetalon Peak to find Khan and the Centaurs. Khan is one tough dude so bring Cairne to help out with the fight. When dead he’ll drop the Glyph of Purification.

Bring the Glyph all the way back to the south west to purify the Fountain.

With these two quests completed all that’s left is to destroy the Human base on the Peak.

Destroy the Human Base 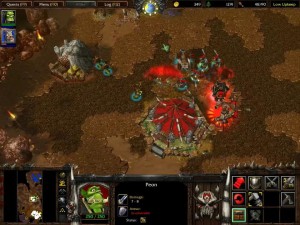 To make this quest easier I advanced to the Gold Mine in the center of the map. Surround it with Towers and you have a fairly strong base to launch your attacks on the Human camps.

The Humans have Gryphons and they are more than a match for your Wyverns so attacking with flying Wyverns is not the answer.

You’ll need to Zeppelin in troops to the Peak. Placing Guard Towers at the base of the Human Base will make this attack much easier as you can draw out the enemy Gryphons and fight them within range of your towers.

As usual focus on taking out the enemy Towers and Barracks first as well as the Gryphon Aviary which is easier to reach from the west side. Destroy the Human Town Hall to complete the quest.

Continue on to The Oracle.