A New Power in Lordaeron

Balnazzar – Wipe out Balnazzars purple base which lies in the center of the map.

Ironforge Dwarves (optional) – Rescue the Dwarves who went missing in the north eastern corner of the map. 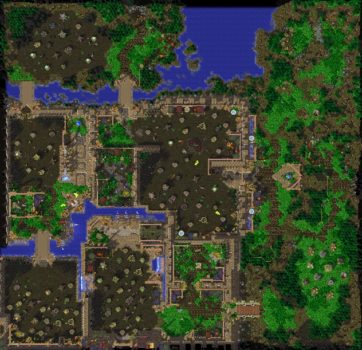 A New Power in Lordaeron Walkthrough

This mission is actually pretty easy if you ignore the other Scourge bases and just focus on rescuing the lost dwarves and then invading Balnazzar’s purple base from both sides. If you want all the loot however, you’ll need to infiltrate the other 3 Scourge camps. For both of your bases begin by building defensive towers along the exits and upgrading your main building and units to their max.

Ironforge Dwarves – When you have a full group of upgraded Knights send them up to the north with Garithos to find the missing Dwarves. You’ll find some resistance along the way but it shouldn’t be too much for your tough Knights. Wait to rescue the Dwarves until you have maxed out your food. The dwarves will be automatically added to your side, going over your food limit, so you’ll have extra units then you could normally build.

Balnazzar – Your two forces should be able to wipe out Balnazzars base. The humans should have as many upgraded Knights as possible along with the Dwarves. For the Undead I went with 8 Frost Wyrms, Crypt Fiends and some Abominations. Bring both forces into the base at the same time. Focus on destroying the Demon Gate, that spawns demons, and other unit producing buildings. Wipe out all the other purple buildings to win the mission.

Optional – If you want to clear the map there are 3 other bases to deal with. They are quite easy to deal with if you have maxed out your units. Instead of focusing on Balnazzar first just sweep down with Sylvanas and sweep to the west with Garithos. As a reward you’ll be able to find the Lordaeron Caches with hidden treasure and some pretty cool items.

Next: Chapter 7 Part 1: Into the Shadow Web Caverns