The Old Kingdom – Kill Baelgun, find the Blood Key and then use it to unlock the entrance into the Old Kingdom.

Find the Gold Stashes (optional) – There are 5 gold coins hidden around this map. Explore all corners and break all of the barrels to find them. 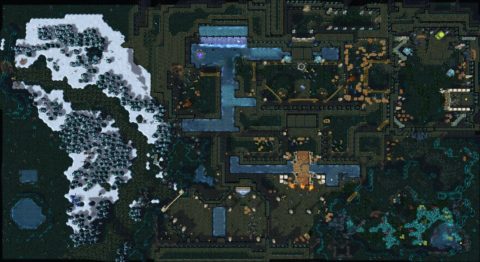 Chapter 7 is split up into three smaller parts each with their own map. In this map you’ll come across numerous Dwarves, some of them are conveniently placed near exploding barrels, making it much easier to take them out.

As soon as you walk to the right a part of the floor will fall away. Use the Meat Wagon to explode the barrels on the other side, killing the Dwarves and then hit the lever next to the barrels to raise the floor back up so you can get across. Stand on the pressure plate next to the fountain to open the door to the east.

As you enter the Dwarves will blow up the bridge. You’ll have to find another way around. Break the barrel just west of the bridge to find the first Gold Coin.

Enter the caverns to the east and kill the Spiders. There’s a second Gold Coin in the bottom right corner of the spider cavern. Pull the lever to the north to roll the door open and continue through. Head west and break all of the barrels and crates. In one of the crates you’ll find a Rune of Intelligence. Break the rock chunks to the north and the break the lever to open the next door.

In this large room you’ll find the third Gold Coin in a barrel to the north east side of the room. Break the lever next to the spider statue in the north west to open the door to the glowing box with the Orb of Frost inside.

On the eastern side of this room is a pressure plate behind an Ancient Door. If you step on it you’ll trigger the spike trap. Pull the lever just to the north first and then step on the pressure plate to lower the floor and get access to the Spiked Collar.

Head west and shoot at the explosive barrels to kill most of the Dwarves. Mop up the rest of them and then head south and west to confront a Dwarven Machine. Take it out quickly as it does a ton of damage.

Break the Dungeon Gate to the east and fight the dwarven hero Baelgun. When he’s down he’ll drop the Blood Key. Bring it to the entrance to the Old Kingdom just to the north to finish this chapter.

Next: Chapter 7 Part 2: The Forgotten Ones