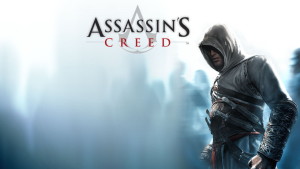 Since the original Assassin’s Creed was published by Ubisoft in 2007 there have been another 8 games in the main series and numerous offshoots.

Assassin’s Creed takes place during the third crusade and focuses on the conflict between the Brotherhood and the Knights Templar. You play the role of Desmond, a modern day bartender who has been kidnapped and forced to use the Animus to relive the memories of Altair, one of the Assassins from long ago.

Assassin’s Creed is a little more complicated than most action games and gives you the option of blending in with the crowd or standing out for more audacious moves. There’s four weapons to choose from and various attacks and movements. Here’s the full list of key controls for the PC.

Blend – Space while walking. Press Space once to blend in with Scholars and Space again to exit.

Gentle Push – Press Shift while moving past someone

Leap of Faith – Press Space, Right Click and Forwards when at a View Point

Grab and Throw – Right Click, Shift and push in the direction you wish to throw

Synchronization – E while on a view point

Prologue – The first part of the game is basically a walkthrough of the controls. You’ll also be given some info on Desmond and his dilemma.

Memory 1 – After failing in your search for the Ark of the Covenant you return to the castle in Masyaf to meet Al Mualim. You’re then must save the village from the Templars.

Memory 2 – Find the traitor and then head to Damascus to assassinate the Black Market merchant, Tamir.

Memory 3 – Travel to Acre and Jerusalem to eliminate two different targets who are both fairly well defended. Watch out for the archers on the rooftops.

Memory 4 – With the Templars starting a war it’s time to take out the heads of the three cities.

Memory 5 – Head to Damascus and the docks at Acre for the next two assassinations.

Memory 7 – Head back to Masyaf for the final battle.