Follow the cave and free step over the wooden beams by holding Space while running. Climb the ladder and assassinate the guard. Fortunately he’s looking the other way. 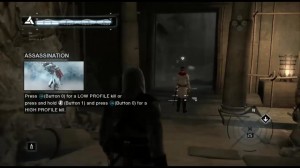 In the next room Robert de Sable and a couple of his mates will enter. Drop down to the floor and approach them. Attempt to do an assassination on Robert then watch the cutscene. Robert will push you out of the room and you can’t get back in to help your fellow brothers. Climb to the top of the wall to end the first part of Memory 1.

When you arrive in Maysaf one of your brothers, Raouf, will tell you to meet the Master, Al Mualim, in his tower. Follow the GPS in the bottom right of the screen to find him. You’ll need to take a few winding paths up to the tower on the hill. 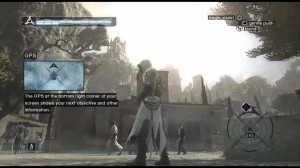 As you enter the Fortress one of the brothers will tell you the Master is waiting in the library. Weapons are restricted in the Fortress so keep your weapons sheathed.

Climb the stairs to the top and speak with the Master. He’s not happy that you failed the mission. 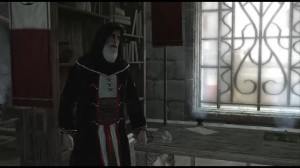 After your chat with the Master the Templars will begin attacking the village. Drop or jump down the hill outside the Fortress and kill all the Templars that you see. 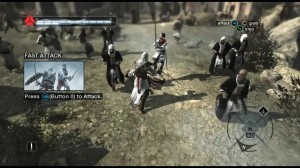 Once you reach the bottom of the hill your fellow brothers will start running past you in the opposite direction. You are commanded to return to the Master, Al Mualim.

As you enter the Fortress a brother calls out to you from one of the towers. Climb up the ladder him and follow him inside. Up the top you’ll do a synchronized Leap of Faith to show the Templars how brave you are. 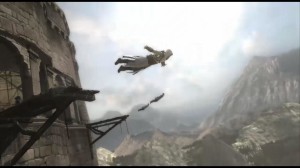 Walk across the beams and then climb up the wall by holding the Right Button, pressing forwards and Space. Let go of the Space bar or you might jump off. Once on the wall just use the movement keys to make it to the top.

With your sword slash at the wooden beam and all of the logs will be released onto the Templars below. 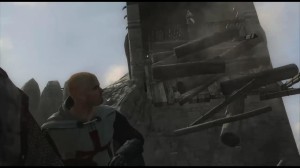 After fending off the Templars you’ll be stabbed by Al Mualim. Don’t worry it’s not the end of you yet.

After the cutscene you’ll be back in the body of Desmond in the Animus. Have a look around and go into the bathroom. 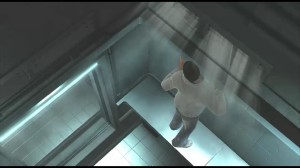 Press any button to interact while you’re standing near the air vent to overhear a conversation in the next room.

Go to sleep and in the morning you’ll be ready for Memory 2.