Once you’ve opened the portal to the western side of the village you’ll find a whole lot more to explore. Just over the bridge on the left side is a farm where you’ll need to defeat a Wood Knight to cleanse it. Eventually make your way to the large door on the western side. This is the entrance to the Storehouse. 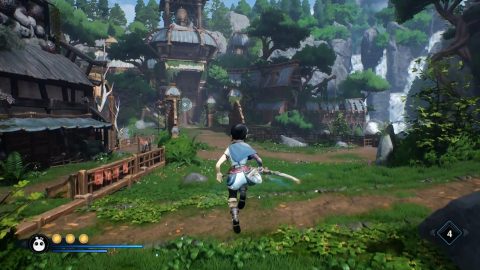 You’ll meet a girl who knew Adira. She tells you that you need to get the energy flowing in the storehouse before you can get the door open. She’ll teach you the Bomb ability.

Throw the Bomb on glowing stones, wait for it to explode or use pulse or an arrow. Glowing stones will activate once triggered with a bomb. You can also use the bomb in combat to damage or stun enemies.

Facing the exit door turn to the left and throw a bomb on the glowing stones. When the stones lift up you’ll find Rot Wisp #1 underneath. 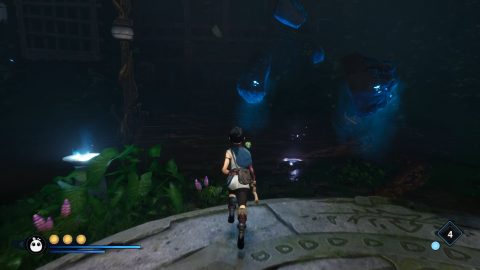 Make your way up and loot the pots and crates up the top. Slide down the path to enter a cavern below and get ready for a fight where you’ll face a new enemy, the Rock Spiders. Explode a bomb on them to open them up, then hit them with a charged arrow. 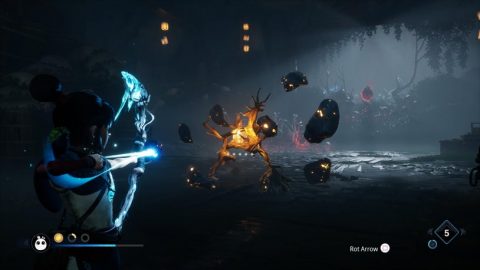 Look up and you’ll notice a blue flower on the ceiling. Use an arrow to grapple up to it and you’ll land on a high platform. Inside the chest you’ll find Rot Wisp #2. 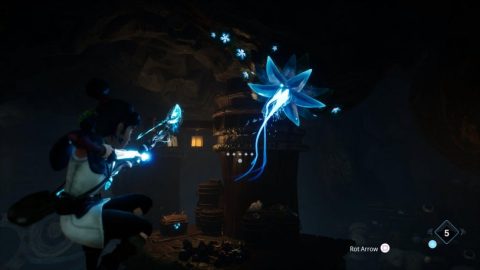 Drop down and head to the stone ramps. Use a bomb on them to make them float and make your way up. When you’re almost at the top you’ll need to shoot a crystal on one of the platforms to move it to a position you can jump to. Then use a bomb on the rocks in the corner to reveal a Lotus Flower.

Grapple to the flower and then jump up to the final platform to the top. Destroy the corrupted bulb and use a bomb on the glowing stones.

Shoot the portions of the pillar so they spin around. Once the three sections all align the pillar will remain in place. 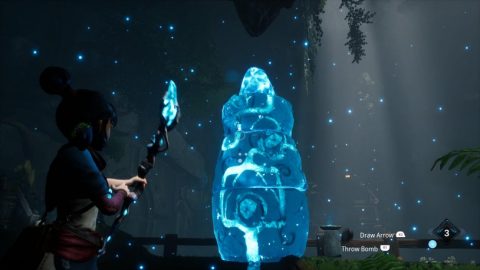 This activates one side of the doorway. Drop back down to the entrance and this time look to the right.

Head up the stairs to the left of the stone pillar. Use a bomb on the glowing stones to the left to reveal a tunnel. Go through and use Pulse on the purple symbol on the ground. Shoot the four targets and you’ll be rewarded with Rot Wisp #3.

Bomb the stones and climb up. You can’t make it all the way so bomb a second set of stones to complete the platforms. Jump to the ledge and kill the enemies. Clear the corrupted bulb and enter the house. Inside you’ll find Spirit Mail #1.

Head up the stairs and go to the left. Use two bombs on the glowing stones below to make platforms all the way across. Jump across the platforms and continue forwards until you see the glowing stones. Use a bomb on them and shoot the crystal to align the three sections. Once they’re correct the stone pillar will remain standing.

Drop down and go back to the pressure plate in front of the exit door. Use Pulse and the door will open. Head outside to the Fields area.