Either walk up to the mountain cave entrance or warp straight to the Village Leader Hall and get ready for a boss fight with Toshi.

The first thing you’ll notice is that Toshi can’t take damage from ranged attacks. You can throw a bomb on the ground next to him and explode it and he’ll still take damage. You just can’t target him directly. 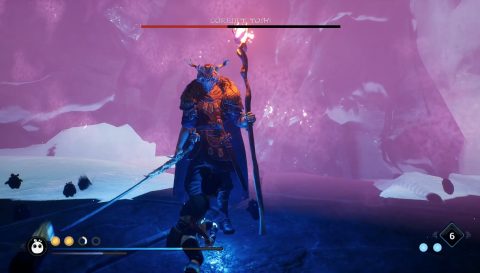 You’ll need to be aggressive to win this fight. Use dash to get up close, parry his attacks and hit him with the rot hammer whenever possible.

When Toshi flies up in the air he’ll either shoot fireballs at you or send out corrupted bulbs from the ground. Either way try to hit the shining portion of his head to drop him from the sky and stun him. 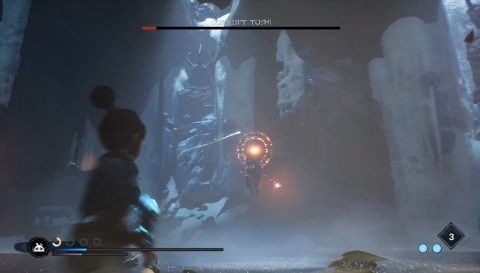 Once Toshi loses all his health and drops to the ground use the Wisps to finish him off. Toshi will take away all of your Rot Wisps. You’ll have no more Rot abilities for a while.

Dash through the barrier and make your way along the path through the snow. Eventually you’ll come to a large open area where you’ll face the final enemy.

The Rot God will run out of the mist into the circular arena. You’ll need to destroy a number of the crystals dotted around his body. Shoot each one around three times to destroy it. 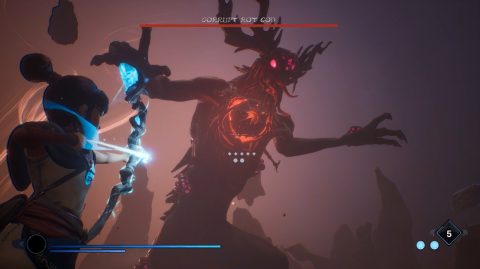 Jump and use focus to slow time and give you a chance to aim. Once the Rot God has taken enough damage you’ll be teleported to the next phase.

You’ll be facing smaller enemies but this phase is more difficult than the first because you still have not Rot abilities and no way to heal yourself. Take out the first two waves of enemies and then head through the barrier. 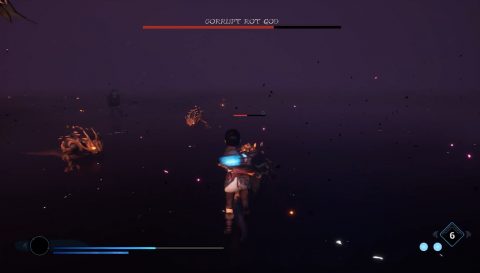 Through the next barrier you’ll be facing a Wood Knight and lots of smaller enemies. The Wood Knight is the biggest problem here but make good use of your dash ability to rush towards him and do damage. You can also jump over most of his attacks. 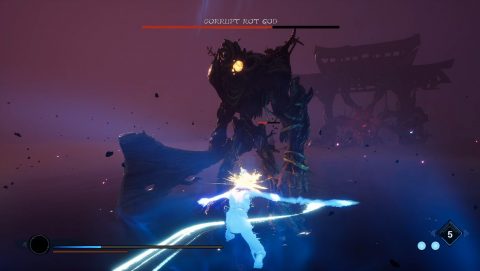 Break the sphere with the Rot Wisps in it to get back one Rot charge. The use the Wisps to clear the corrupted bulb. Dash through the barrier to the next area.

You’ll be back in the arena with the Rot God. This time you have one charge so you can get some healing back by using the flowers around the edges.

The goal is still the same. Shoot arrows at the crystals and destroy enough of them to take the Rot God down to about 1/3 of her health. 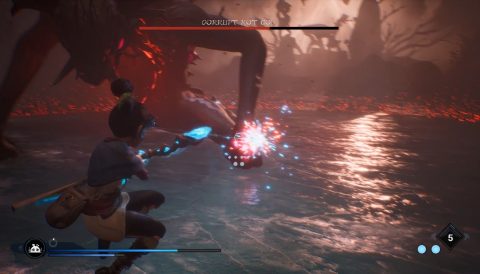 You’ll then be teleported to the next phase.

Make your way over the stone platforms to the barrier at the top. The platforms will collapse a few seconds after you land on them. You’ll need to use the Lotus Flowers along the way. 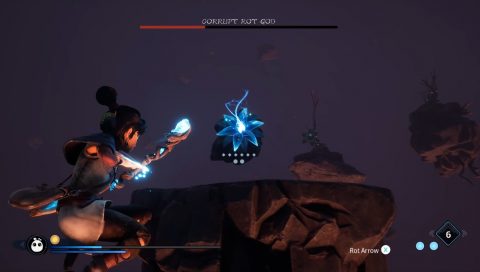 The last few Lotus Flowers have no stone ledge under them. You’ll need to focus and target the next flower along before you fall. Once you’re at the top break the sphere to release the rest of the Rot Wisps and cleanse the corrupted bulb. Dash through the barrier back to the battle arena.

Quickly use the Wisps on the flower if you need health and start killing off the smaller creatures. At certain times during this fight the spears in the Rot God’s back will turn golden. Use Rot Wisps to target the spears and then send out a pulse to destroy it. 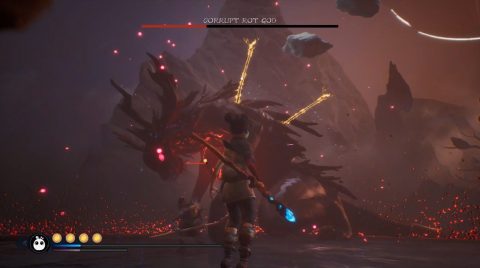 After doing this three times the Rot God will be defeated. Go around to the front of the God and use Wisps to cleanse the corrupted bulb.