Once you reach the gate we’ll take a short detour to find a Meditation Spot. Go to the left and look for a gap in the cave wall. Look over the edge to see a corrupted bulb. Use the Wisps to cleanse it and then throw a bomb on the rocks below. Head across the platforms to the other side where you’ll find a Meditation Spot. 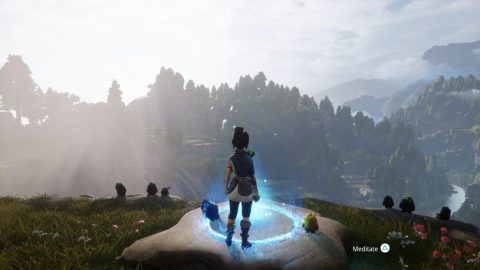 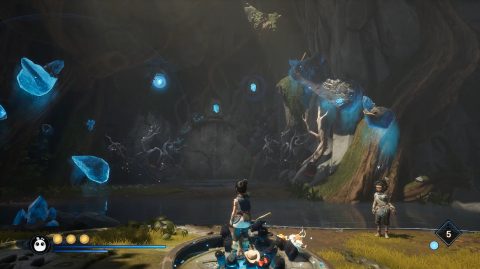 The gate will open. Head on through and make your way down the stairs. You’ll get a brief cutscene of the Village Heart.

Head down the stairs to the right and slide down to the water below. Swim along until you find a tunnel. Go through and kill the small enemies along the way. Continue through the tunnel until you see a Lotus Flower. Grapple up to the flower, slow time by focusing and grapple to the next flower along. 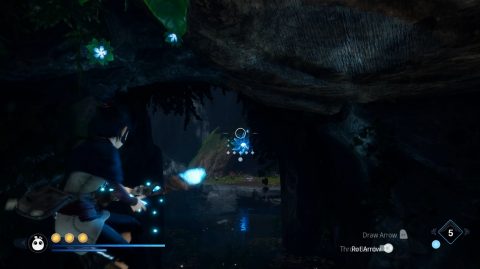 Use a pulse to reveal Rot Wisp #1. Dive back into the water and climb on the glowing stones. Jump to the wall with the line of paint on it and climb up.

Look down and bomb the stones. Shoot the crystal on the side of the stone forming the bridge twice and jump across to the other side.

Jump across the acid water and run up the stairs. Continue around and take a couple of jumps across the water again.

When you get to the cavern with the glowing stones throw a bomb on the stones. Jump over to the large stone and shoot the crystal. 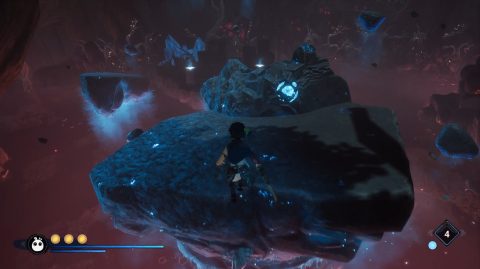 Shoot the crystal on the smaller stone and jump over to it. Jump to the next platform and then to the stone wall where you can climb up.

There is a tunnel in front of you. Turn left first and go around to Rot Wisp #2. 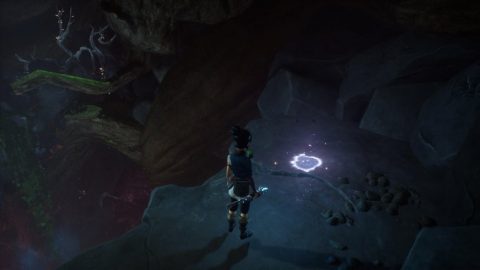 Slide down into the arena and shoot the Forest Tear in the roof. This drops down so you can make a Rot Cloud. 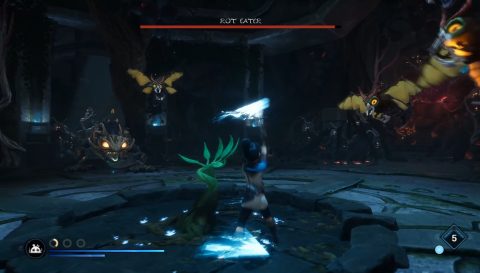 The Rot Eater spawns smaller creatures. Kill them to gather energy and then use the Rot Hammer to do massive damage to the Rot Eater.

Once it’s been defeated use the Wisps to clear the corrupted bulb. Use the Rot Cloud to clear the Forest Shrine for some extra currency and then head up the stairs.

Launch a bomb at the stone pillars and shoot the crystals to turn the three sections around until they all match. Once they do they’ll lock into place and the gate will open.

Stand on the circular plate, use pulse, and it will take you for a ride down the river. 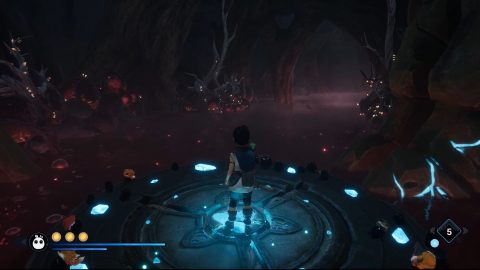 You’ll be attacked by the exploding creatures and the fireball shooting monkeys. Use pulse to explode the red creatures if you want to save arrows.

At the other end get off and continue down the corridor. You’ll be attacked by more enemies as you go. Use the Wisps to clear a doorway of corruption, walk down the stairs and then throw a bomb at the stones blocking the doorway to the right.

Slide down to the cavern below. On both sides you’ll notice a pillar with a corrupted bulb beyond it. Use a bomb to explode the pillar and jump across the platforms until you can clear the bulb. 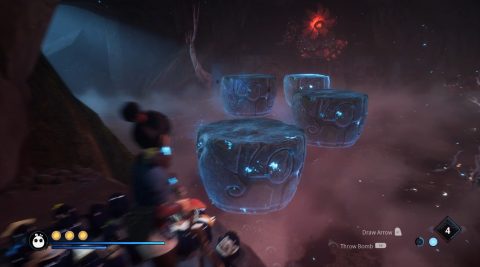 Do this on both sides and then wait a few seconds for the acid water in the cavern to dissipate. Drop down and get ready for a fight with Rock Spiders, Monkey Creatures and two Mages.

Try to target down one Mage at a time to stop them from healing up. After the battle use Wisps on the central bulb to clear the corruption. Use pulse on the center circle to open the door to the next area.

Jump around to the left where a Rot is pointing out to you a broken tree trunk. Get close to it and interact to see a memory.

Bomb the stones to the left and jump across the platforms. to the open cavern with the ring of fire. When you’re standing on the lowest level you’ll need to jump the ring of fire as it approaches. 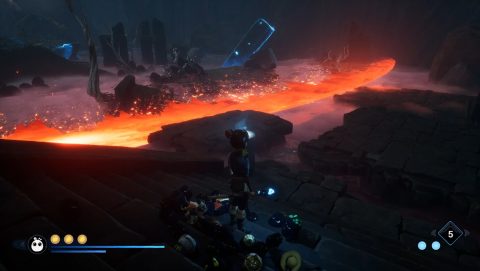 Drop down and jump across the gaps. Use a bomb on the stones and then grapple across to the Lotus Flower. 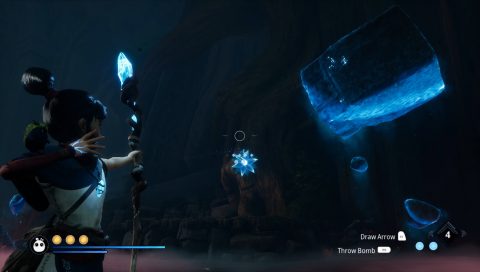 Grapple to the Lotus Flower, shoot the crystal on the long stone and jump across to it. 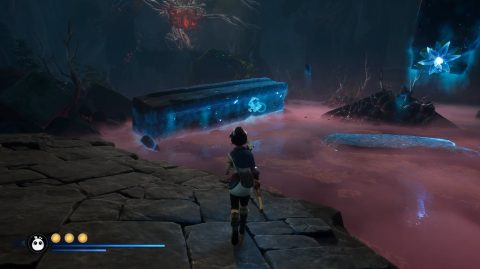 Stand on the end of the long stone and shoot to the next Lotus Flower. Head up the stairs and use Wisps on the corrupted bulb to clear the cavern.

Now that the water is clear jump into the water and turn to face the lift. Swim to the left and you’ll see a tunnel. Swim through the tunnel and you’ll find a ledge where you can climb up. Move the stone to find Rot Wisp #6. Inside the chest you’ll find a Crown Rot Hat. 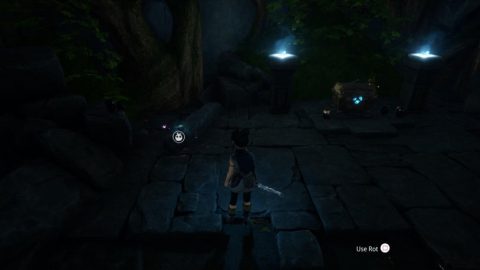 Swim back and take the lift up to the top. Look at your map to find the next objective, Free Adira. It’s located to the south so make your way there. When you get to the large relic symbol on the ground interact with it. After the cutscene you’ll be on the edge of the tower.

Make your way up to the top of the tower. You’ll need to grapple up to a Lotus Flower at one point. Once there you’ll get a cutscene and begin one of the toughest boss fights.

There are two phases to this boss fight. For the first phase the Woodsmith is invincible until you break his shield. Throw a bomb at the spinning column. Then shoot the interior crystal 3 times. 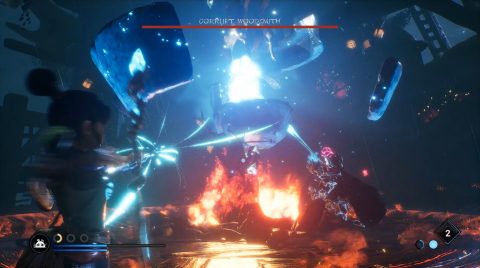 This breaks the shield and stuns the Woodsmith, giving you a chance to hit her. The Woodsmith will jump away and start hitting the ground. You can still hit here during this phase but it’s easiest to jump up, focus and use arrows.

The process continues until the Woodsmith is down to about half health. She’ll then jump to the central fire and pick up a hammer and sword.

If you’re lucky you can throw a bomb at the Woodsmith. Shoot the interior crystal as the armor opens up three times to do massive damage. 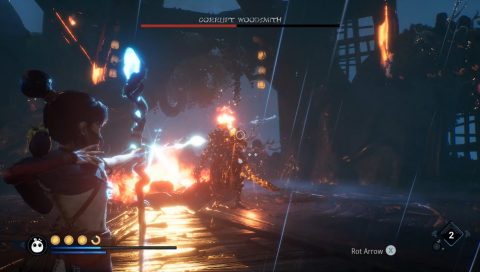 Use the flowers around the edge if you need health. Otherwise save up energy and use the Rot Hammer for maximum damage.

After the battle you’ll be shown a long cutscene and return at the base of the tower. Make sure you meditate in the circle before you leave. 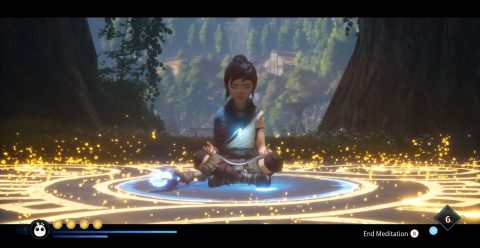