After reaching the Ginso Tree you’ll need to find the Water Vein so you can get inside the tree. Walk to the east and take out the big spiky blob. This is technically the Thornfelt Swamp but you’ll soon be delving into the Moon Grotto. 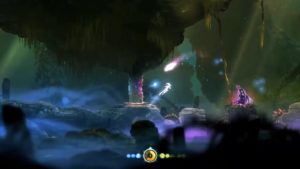 Continue to the west and save the game before you attempt the next part. You’ll need to dodge two laser beams as you can down and back to the east.  Jump just as the laser is about to turn off and take shelter in the small gap with the green health plant. 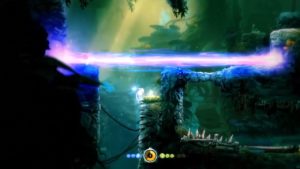 Continue down and you’ll see the Gumo once more. Instead of following him down you can clear out the area to the west for another Energy Cell. Further west is a secret area with another Spirit Life Container. 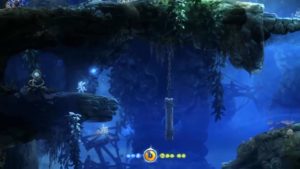 Now head back and follow the Gumo down. When you find him he’ll release a trap that will drop you down into Gumo’s Hideout.

You can’t go to the west yet so jump over the spikes to the east. Drop down the horizontal moving pillars and grab the Map Stone Fragment at the bottom west. 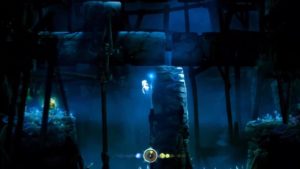 Don’t go back yet. Instead head to the east and Gumo will trap you in a room. Kill the creature and go through the door that opens to the east for a Keystone. Now go back to the Map stone and click on it to reveal all the unexplored areas of the Moon Grotto.

Go back to the east, past the horizontal pillars to the vertical pillars and pick up the Spirit Life Container in the middle. Drop down and jump over the spiked moving pillar to grab the second Keystone. Use them to open the door to the east.

Drop down, avoiding the spikes along the way and visit the Ancestral Tree in the east. You’ll be given the Double Jump ability. Head back and use the double jump to take the top path that you haven’t explored yet. As you make your way across and then down you’ll find another Energy Cell. 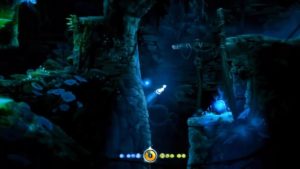 From here it’s time to explore the western section of the Moon Grotto. Drop down and explore the southern area of this section first. 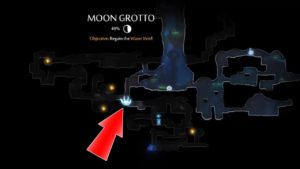 Run to the right and drop down to avoid being crushed by the pillars. Hop down and go to the left. Jump around the spikes to grab the Spirit Light Container. Jump back and open the Energy Door using 4 energy cells. Push the stone over the edge so it blocks the laser.

Now that the laser is turned off push the second stone off the edge to the bottom and push it under the stone barrier so the fireball smashes it. Jump up and grab the Energy Cell and Spirit Light Container. That’s it for the southern part of the Moon Grotto.

climb back up to the point in the map above where you can head to the west. Jump over the purple water, up the wall and do a double jump over the spikes to the right. Continue west and you’ll spot the Gumo climbing up a wall of spikes. 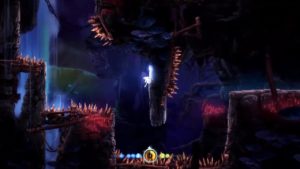 Carefully make your way around the spikes. Watch the video at the 28:00 mark for exactly how to do it and grab the Spirit Light Container at the top. Head east now, over another pit of spikes, by jumping across to pillars descending from the roof.

Pull the lever on the other side to open a trapdoor so you have easier access if you want to come back to this area later and then follow Gumo over the chasm to the east.

Climb up to the very top to where Gumo has fallen, avoiding the falling boulders along the way. Follow Gumo to the west and he’ll give you the Water Vein. 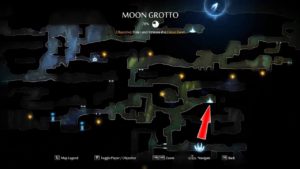 Head back to the Spirit Well, shown on the map above and teleport to the Thornfelt Forest where you can enter the Ginso Tree. Or simply run back and pick up any extra loot that you may have missed along the way.