The Windtorn Ruins can found at the very top of the Windswept Wastes. Teleport to the Spirit Well closest to the ruin entrance and use your Light Burst and Bash abilities to make your way up. Along the way you’ll be able to pick up a Mysterious Seed. There’s also a Gorlek Ore on the cliff wall to the left. 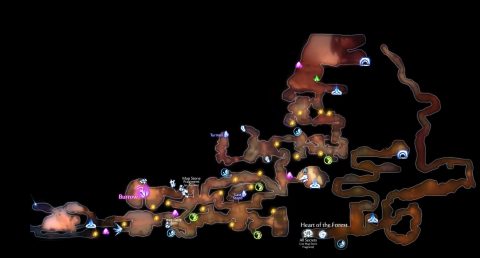 Once you reach the ruins you’ll only be allowed to enter if you have the four Wisps. It’s also advisable to have completed the Hand to Hand quest so that you have the Map Stone Fragment.

After the cutscene make your way down the passage. As you pass by the various paintings the Wisps will fill you in on some more of the story. Along the way you’ll need to pull a Lever hidden behind some jars. This opens a stone hatch so you can continue further down.

Once you reach the bottom dash through the sand to the right and break the infection next to the Spirit Well. The column will fall over and smash through the wall to the left.

Head through the smashed wall and Ori will stop by the statue. The final Wisp will be revealed and all the Wisps will join together. This starts the most difficult chase scene in the game. 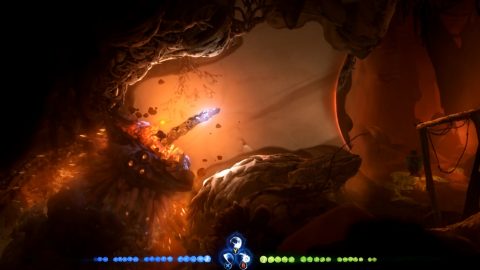 It may take you a few tries until you learn the path and can do it quick enough to stay out of reach of the Sand Worm. When you do escape the ruins you’ll come out at the very top of the Windswept Wastes.

If you’re collecting all of the fragments teleport back to the Spirit Well at the bottom of the ruins. Drop down and run to the left. Use the Map Stone Fragment on the stone circle and all of the secrets will be revealed on the map.

The first secret you’ll notice is the Energy Cell Fragment hidden in the sand to the right. Dive in and pick it up. Now that all secrets have been revealed you may want to pick up anything you’ve missed along the way.