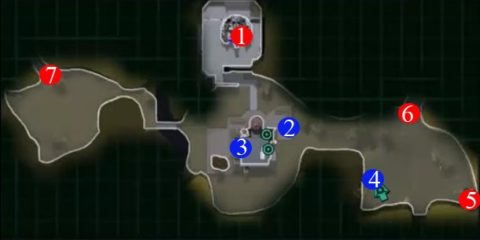 1) Ebon Hawk – Pick your party members and head outside the Ebon Hawk. If you don’t want to be noticed make sure you put your lightsaber away as the locals don’t view Jedi kindly.

As you step out a woman will tell you to speak with Administrator Adare to complete your business in khoonda. You’ll also meet Tarn here who will run away if he sees your lightsaber.

Pato Ado is also here and he will sell you Pazaak cards or play Pazaak with you. If you win enough games against him he’ll give you a rare piece of armour.

2) Droid Merchant Akkere – This merchant sells the HK Control Cluster, a necessary part in restoring the HK-47 if you haven’t already found it on another planet.

Later one, once you have found his Hydrospanner in one of the Defense Droids in Khoonda you can ask him about it. He’s been taking parts to sell in his shop. You can either turn him in or ask him to join the militia to help with the defense of Khoonda.

Akkere also sells Thorium Charges which can be used on the locked doors in Dxun and Korriban that can’t be opened any other way.

4) Saedhe – This guy has lost his atmospheric sensors. You’ll find them by searching a pile of rubble in the Crystal Cave. If Bao-Dur is in your party he can open them and discover there has been surveillance by Zherron. You can take these to Administrator Adare in Khoonda and have Zherron replaced or sell them to Saedhe for 3,000 or 4,000 credits with persuade.

5) Crystal Cave Entrance – Once you have finished the Jedi Enclave and the Crystal Cave and come back outside you’ll be confronted by the Mercenary Leader Azkul and 6 of his friends. I don’t recommend taking these mercenaries on until you have levelled up a fair bit.

If you refuse to help him he will attack immediately. If you either pretend to help him, to avoid a fight, or actually want to help him because you’re following the Dark Side then he’ll have a few tasks for you. First to sabotage the Defense Turrets and then to Disable the mines. The mines are outside the Khoonda Administrative building and you can sabotage the Turrets from inside Khoonda. Return to Azkul and tell him you are ready for the invasion. 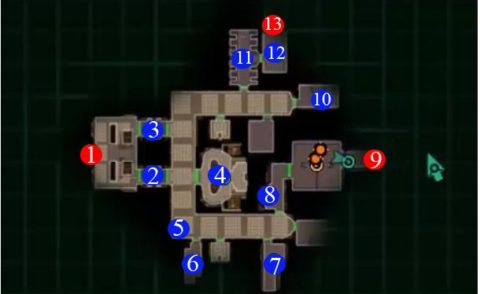 There’s a lot to do here in Khoonda. Your first task is to speak with the Administrator Adare and get permission from her to enter into the Enclave Sublevel.

Zherron at #7 will also have a Crystal Cave quest. His assistant, Berun Modrul at #5, wants you to find the atmospheric sensors in the Crystal Caves to see if Zherron is up to anything suspicious.

There are locked areas of Khoonda that you’ll get the passkey for once you agree to help with the defenses.

2) Suulru the Farmer – Someone has stolen his moisture vaporators. The culprit is Jorran and can be found in the Enclave Sublevel. Once you confront Jorran you’ll find him again in the Enclave Courtyard where you can persuade him to give them to you. Speak with Suulru again for a reward. Later you can ask Suulrto to join the militia to help with the defense of Khoonda.

3) Gerevick the Mighty – He sure has a mighty ego! He won’t talk to you but will confront you with his goons when you try to leave the Enclave Sublevel.

4) Administrator Adare – Speak with Adare for some basic information about what’s been going on and get permission to enter the Enclave Sublevel. You’ll come back to Adare once you’ve met with Master Vrook.

5) Zherron’s Assistant, Berun Modrul – He has his suspicions about Zherron and wants you to find the atmospheric sensors in the Crystal Cave. You can hand these in to Adare and Zherron will be temporarily removed but it turns out the Zherron is justified and will be reinstated. You’re better off selling the sensors to Saedhe outside the Crystal Cave instead.

6) Adum Larp, Merchant – This Rodian was a merchant selling weaponry in the first Knights of the Old Republic game. Once again you can purchase a selection of items from him.

7) Zherron – Speak with Zherron about clearing out the Crystal Caves. You can return for a reward of 2,000 credits. Once you’ve been to the Enclave Sublevel and found both dead salvagers you can return their items to him for Light Side points or forge the Will for Dark Side points.

8) Turret Control – Once Adare has asked you to help defend Khoonda you can use the console here to program the Defense Turrets outside the facility. You can either have them fire on the Mercenaries for the Light Side or to fire on the Khoonda Milita for the Dark Side.

One of the droids will have a Hydrospanner. Take this to Akkere in the Khoonda Plains and ask him to explain himself.

11) Medical Lab – Either program the medical droid to treat the injuries of the wounded soldiers or go around and treat all of their injuries yourself. They will help with the defense of Khoonda later.

12) Storage Area – Lots of random items. Can be accessed from the outside through the door at #13. 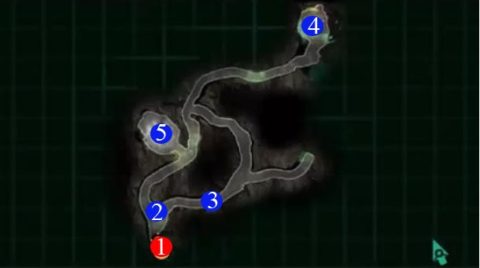 3) Ahrnell – This Twilek has discovered a way of moving through the caves without being attacked by Kinrath by using a Kinrath Gland. For Dark Side points you can kill him for it or ask to look at it and not give it back.

4) Kinrath Matriarch – This is where you’ll battle the Kinrath Matriarch and all her little hatchlings. Once you have killed them all search the crystals for a lightsaber crystal with your name. It’s the most powerful crystal in the game.

5) Mercenary Camp – You can only have the encounter here once you have finished the Enclave Sublevel. You’ll get a clue to Vrook’s location which will lead you here.

For the Light Side defeat the Mercenaries and “rescue” Vrook. Vrook will chastise you as it was his plan to be kidnapped all along. Head to the exit and get ready for the defense of Khoonda.

For the Dark Side you can tell the Mercenaries you want him dead. You’ll have to fight with them and then Vrook. He’ll run away for you to deal with later.

When you leave the Crystal Cave you’ll be confronted by Mercenaries.

If you’re coming here for the first time you’ll want to speak to the Mercenaries and the Salvagers. They’ll have some optional side quests for you and the mercenaries will eventually tell you about the attack on Khoonda. If you’ve met all of the Jedi Masters and completed the attack or defense on Khoonda then you can enter the Jedi Enclave at #6.

2) Mercenary Camp – If you bring Mandalore (from Dxun) he’ll receive a challenge from Esok who wants his Helm. Dopak is the leader of this camp and he’ll give you some information about what they’re up to.

3) Salvager Camp – The Salvagers have been going into the Enclave Sublevel looking for items. Davaala will be willing to sell you some Jedi related items and will tell you about the two Salvagers who have died in the Sublevel.

Ralon will try to sell you a Holocron. You can use your Awareness or common sense to work out that it’s a fake. If you speak kindly to him he’ll tell you about hiw wife and children. You can give him 500 credits for Light Side points and the fake Holocron.

Jorran will be here once you’ve found him in the Enclave Sublevel. He has some Jedi items for sale as well. Once you are ready for the Khoonda defense you can come back and ask him to join the militia.

5) Entrance to Enclave Sublevel – When you approach this entrance you’ll be approached by a salvager Tac Palae who tells you of Jorran who’s still stuck inside the Enclave.

6) Entrance to Rebuilt Jedi Enclave – You’ll only have access to this once you’ve met all of the Master Jedi including Master Vrook. 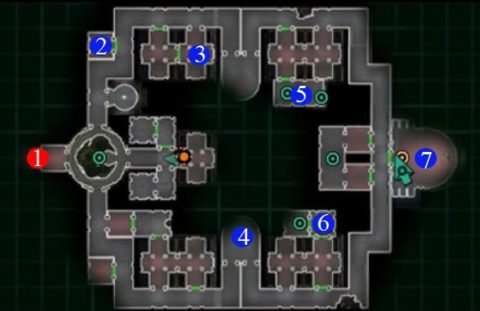 Initially you come to the Enclave Sublevel looking for Master Vrook. Instead you’ll find a Datapad with a clue to his whereabouts. Once you finish this level you’ll need to return to the Crystal Cave and rescue Vrook from the Mercenaries.

2) Jorran, Trapped Salvager – Once you’ve cleared the area of Laigreks you can tell him that the coast is clear and he’ll leave his hideout. He’s found a few items that you can purchase from him right away or back at the Salvager’s camp.

4) Dead Salvager – The second body you recover will have a Will on it. You can return the bodies and the Will to Zherron or the Salvagers at their camp. For Dark Side points you can forge your name onto the Will and give it to Zherron.

5) Droid Bay & Workbench – You can repair the droids and send them out to patrol the corridors. They’ll help clear the area of Laigreks. The Workbench here can be used to upgrade your items.

6) Storage Bay Console – You’ll find a Datapad which tells you about the Storage Bay in the room to the west. The door can be opened by overloading the terminal and causing it to explode. Just make sure you’re out of the room when it explodes!

7) Disciple – This man is working for the Jedi and has lots of information about Vrook and the other lost Jedi. If you have a female as the main character then Disciple will join your party. If not, you can find him back at Khoonda.

Search the Statue and read the Datapad for information on where Vrook is being held, the Mercenary Camp in the Crystal Cave.

As you are leaving the Enclave Sublevel you’ll be confronted by Gerevick. He’s brought a few thugs with him and will fight you no matter what you say. Once you defeat them head to the Crystal Cave to find Master Vrook.

When you have completed all of the other quests return to Administrator Adare (or the Mercenaries) to prepare for the defense (Light Side) or attack (Dark Side) on Khoonda. There are basically four things that you can either do to help or sabotage the Khoonda defense. Place or remove mines around the perimeter of Khoonda, program the Turrets to attack enemies or Khoonda militia, activate the Droids and set them to attack friends or foes and lastly treat the injured soldiers so they can join in the battle.

Once this is done return to either Zherron (for the defense) or the Mercenaries (for the attack) and let them know you’re ready to go. You’ll have a pretty tough battle ahead of you so keep your party members together and heal them up when needed.

Once the battle is complete and you have found all of the lost Jedi you can now enter the Rebuilt Jedi Enclave. If you haven’t completed the Master of the Palace quest you may want to do that now and come back to Dantooine for the end-game storyline later.