Master of the Palace

At some point in the game you’ll receive a message from Kelborn to meet back at the Mandalorian camp on Dxun. When you are ready take the Ebon Hawk back there and then speak with the Mandalorian Guide to fast travel back to the camp.

Your group will get split up into two. One will head to take out the Sith base on Dxun and the other to the Royal Palace on Onderon to meet with Master Kavar. You’ll need to select the three characters you want to send to the Sith base. I recommend at least one character who is strong in the force such as Visas. When you’ve selected your tomb your first group will head out to the Jungle Tomb. 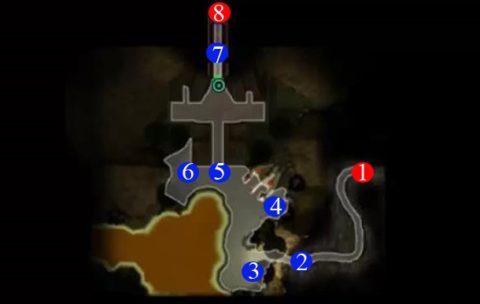 2) Mines and Perimeter Sensors – You’ll have to either sneak or rush your way past the mines and sensors. If Bao-Dur is with you he’ll give you the codes to enter into the sensors so someone can use stealth to sneak up to the sensors and use the override code on them. You can’t use Bao-Dur for this task because the sensors will spot his little droid. If you get spotted you’ll be attacked by Sith Elite Troopers.

3) Power Generator (Turrets) – If you have a party member with the Repair skill you can get them to rewire this Power Generator and cause it to explode. This will stop the Turrets at #5 from firing on you when you get close. The other option is to use the console at #4 and reprogram the Turrets to fire on the Sith.

4) Sith Camp – There’s a small Sith camp here with a console. Use the console and activate the “Foothold” scenario which will turn the Turrets onto the Sith if you haven’t already deactivated them at #3.

5) Ramp – To get to the top of the ramp you’ll need to battle through many Sith. You can use the console at #4 or destroy the power generators at #3 and #6 to make this battle easier. If you have Visas as your leader then make good use of her Force Storm ability to deal damage to multiple Sith at once.

7) Sith Lords – At the top of the ramp open the Tomb Doors and go on through. You’ll encounter your first Sith Lords. There are two of them waiting for you here. If you have trouble with them focus all your attacks on one of them at a time. 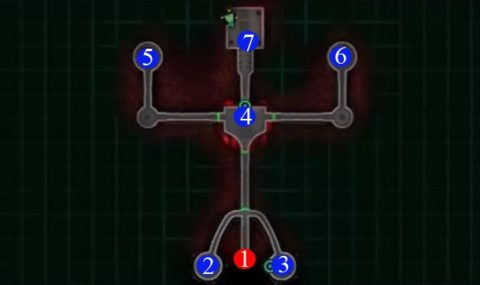 Explore every area of this tomb as you work your way to where the ritual is being conducted at #7.

2) Medical Droid – After defeating the Sith here you can repair the Medical Droid which will follow you around and heal you up when you take too much damage. Use the Ancient Terminal to unlock a nearby Ancient Box. The correct solution is “eba”.

4) Locked Door – There are three Sith Apprentices here. Defeat them and then use the Ancient Terminal at either #5 or #6 to unlock this door.

5) Ancient Terminal – You’ll find a couple of Boma Beasts here along with their masters. Kill them and then use the Terminal to unlock the door at #4.

7) Sith Master – Get ready for a fairly tough fight against a Sith Master and 2 Dark Jedi Masters. Buff up your characters before engaging in battle and then target one of the enemy at a time with all three of your characters. Search the remains for a Light Saber Crystal. There’s a corspe in the back of the room which has Freedon Nadd’s Short Lightsaber and a few other items.

Once you’re done here speak with Xarga to continue the mission. You’ll switch over to your main character.

Back in the main camp you’ll be given a Basilisk infiltrate Onderon. Choose one other character that you want to bring with you. Kreia will be an automatic addition. Mandalore is a good choice for this mission.

As you step out of the Basilisk you’ll automatically enter into battle. If you are on the Light Side you’ll face off against General Valku’s troops. If you follow the Dark Side you’ll battle the Royalist Soldiers.

Keep fighting your way to the north and take the exit to the Sky Ramp. 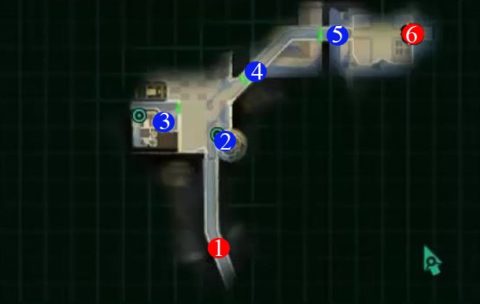 2) Vaklu Troopers and Console – Some Vaklu Troopers are hiding out in here. There’s also a console that you can use to deactivate the forceshield barrier at #4 and use the Turret Control to shoot down some enemy ships.

3) Barracks & Workbench – If you’re fighting to save Queen Talia then the Royalist Soldiers will help you out. If your with Vaklu then you’ll have more enemies to defeat here.

4) Forceshield Barrier – Use the console at #2 or Bao-Dur’s shield breaker ability to deactivate it.

As you make your way up the ramp you will be attacked by waves of enemies. You may be able to convince some of them to run rather than fight.

5) Second Forceshield Barrier – This forceshield barrier has already been damaged and you can get through it by bashing it with a lightsaber.

6) Exit to Royal Palace – Once you reach the top of the ramp kill all of the enemies and then head into the Royal Palace. 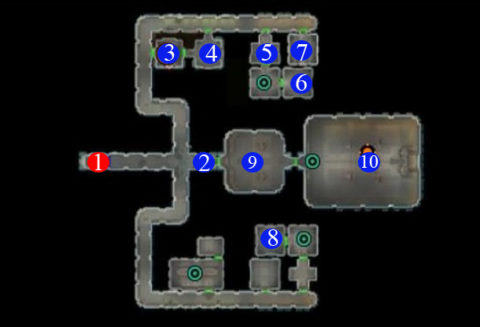 2) Outer Door – This door is barred shut when you get close to it. To open it you’ll need to speak to Mastar Kavar, for Light Siders, at #6 who will tell you what to do. For Dark Siders you’ll need to use both the northern and southern consoles to open this door.

4) Gas Room – As far as I can tell you’ll be stunned by the gas no matter what you do. Try using Breath Control on your main character to prevent damage and then open the container.

5) Master Kavar – If you’re following the Light Side Mastar Kavar will be here to help you out. He tells you to talk with Captain Kadron at #6.

6) Captain Kadron/Royalist Soldiers & Console – For Light Siders you’ll meet Captain Kadron here who will tell you to go to the southern console and transfer the primary functions to this console.

For Dark Siders there will be Royalist Soldiers here that you need to defeat. You can then use the console and disable it. Your next stop is the southern console.

7) Treasury – This is the treasury and is guarded by some tricky puzzles. If you get one answer wrong the door will be permanently sealed. The answers to the three puzzles are:

8) Slicer Kiph and Console – Fight your way through the rooms to where Slicer Kiph is working. If you follow the Light Side you can chat with Captain Riiken who’s being held in the Force Cage. Talk with Kiph and either kill him, allow him to leave or tell him to wait. Use the console and transfer the primary functions to the northern console. Shut down this console to open the door at #2 and to release Captain Riiken from the Force Cage.

As a Dark Sider speak with Kiph and kill him. Disable the console to open the Outer Door at #2.

9) Drexl Larva Beast – A giant beast is trying to break through to the Throne Room. When you enter the beast will become enraged and attack. It does a fair amount of damage but your high level characters should be able to handle it by now.

10) Queen Talia – Now’s your chance to either rescue or defeat Queen Talia, depending on your alignment. Either way, when you enter the room you’ll have the chance to use your Battle Meditation which will rally your troops and make the fight much easier to win.

For the Light Side you’ll face off against Vaklu and a couple of his guards. It’s an easy fight compared to fighting a Jedi. When he’s been defeated you can either sentence him to death, set him free or allow the Queen to decide. For Light Side points allow Queen Talia to decide and convince her to hold a trial. Lastly Kavar will teach you a new Jedi technique.

For the Dark Side you’ll face off against Master Kavar which is a significantly more difficult battle. Use buffs before engaging with him. After the battle you’ll have to decide whether to let Vaklu kill Talia or to kill her yourself.

Once the mission has been complete here you’ll be taken back to Dxun to meet up with your other characters. You can now complete any of the remaining planets or head to the Rebuilt Jedi Enclave on Dantooine to start the final quest.