After arriving at the port make your way around to the right until you stumble across a drunk Captain Obo. Continue around the boat and walk into town. 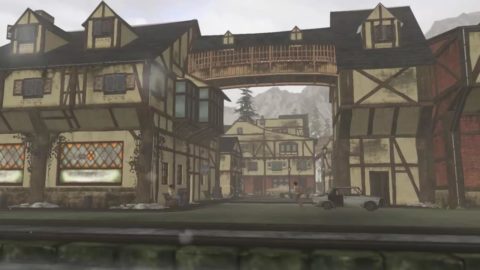 Enter into the tavern, the first door on the left, and speak with the bartender. He’s the guy who gave you the Unofficial Pass. Speak with him about everything.

Once he finishes talking speak with the waitress cleaning the table. Leave the tavern and continue walking to the right, further into town. Take a left at the end and walk down to the end of the alley.

Walk up the steps and enter into the store on the left. This is Steiner’s shop. Steiner is busy working on a clock. Have a chat with him. He’ll accuse you of stealing the automaton heart on your necklace. Just tell him that you didn’t steal it and be polite.

During his excited talking Steiner will have a heart attack. Look at the clocks on the right and take the Empty Cup.

Continue around to the right behind the counter and look at the cuckoo clock. Open your inventory and place the Empty Cup on the base of the clock. 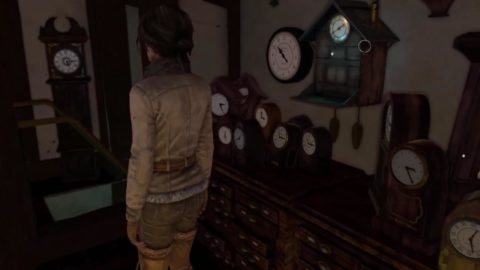 Take a look at the drawers to the right of Steiner and open the one in the middle on the far right. Take Steiner’s Prescription. 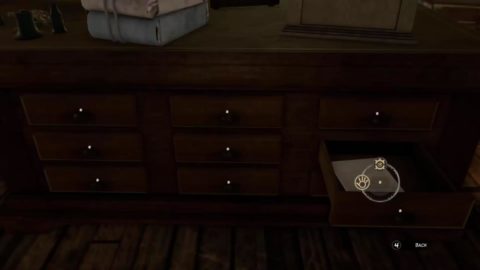 Open your document inventory and take a look at Steiner’s Prescription. The important point to note is that the capsules must be taken at tea time.

Look at the cuckoo clock again and open the glass covering the clock face. Change the time to 5 O’clock and Steiner’s tea with the medication will be made. Grab the cup with Steiner’s Medication and give it to Steiner.

Follow Steiner downstairs and talk to him again. Look at the counter to the left and grab the Newspaper Clipping. 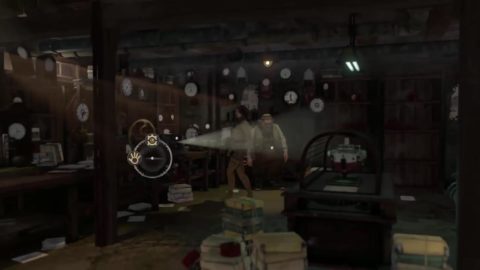 Open up you inventory and read what’s on the Newspaper Clipping. Walk to the right and look inside the open box. 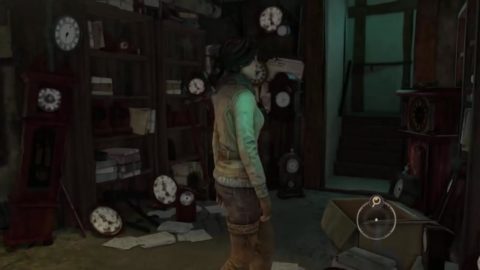 Steiner will head back upstairs giving you a chance to take a look around. There is a model of the boat, the Krystal, in the center of the room. If you look more closely at it you can flick a switch at the corner of the table to turn the model light on. Kurk’s prosthesis is lying on one of the side tables but it’s not finished yet.

Climb the stairs to talk with Sarah and Steiner, then leave the shop. Run all the way back to the tavern. Enter and speak with Captain Obo who’s sitting by himself in the corner. 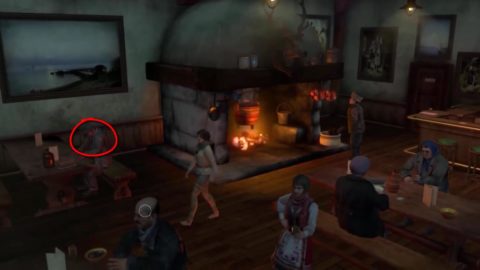 Try to hedge with him (3) and he’ll let you sit down to tell you a few stories. Once he’s finished chatting go over and talk to Sarah by the bar. When you’re talking Vlad will agree to make a restorative for the captain.

Walk back over to the Captain and talk to him. Sarah will bring him the restorative. You’ll need to convince the Captain to take you and the Youkols over the lake. First coax him, then tell him that you need him. When he counters tell him that he’s afraid. Lastly use the ‘You won’t like it’ line and then play on his pride. He’ll still say “No” but Sarah will walk up to you and tell you not to give up.

Leave the Tavern and walk up the steps to the Krystal. Enter into the side door to the passenger section. Walk towards the back and the camera angle will change. You should see stairs leading up. Walk up the stairs to the Captain’s office and look at his desk. You’ll see Captain Obo’s Journal. Pick it up and read it.

Run back to the Tavern and talk to the Captain again. This time you know he really does want to redeem himself. This time he’ll be convinced and agree to take the Youkols across the lake.