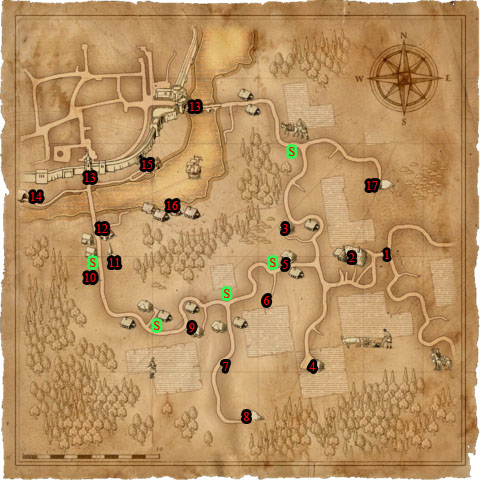 Upon reaching the Outskirts of Vizima in search of the Salamandra, Geralt sees a woman and child hurrying to enter the palisades but unfortuntely the woman, Caroline, is killed. The child, Alvin, escapes and he features throughout this chapter. He’ll be taken in for a while by Geralt’s friend Shani.

Your main objective is to get into the town of Vizima but there are many quests to complete along the way, including two trophy quests. A trophy is gained by defeating a powerful enemy. There are two trophy quests in each chapter.

A Game of Dice
Contracts
Dead Hand of the Past
Dice Poker: The Novice
Hot Potato
King of the Crypt (Trophy Quest)
Racists
She’s No Early Bird
The Monster of the Lake (Trophy Quest)
Wanted

Next: Chapter 2
Back: The Witcher Walkthrough