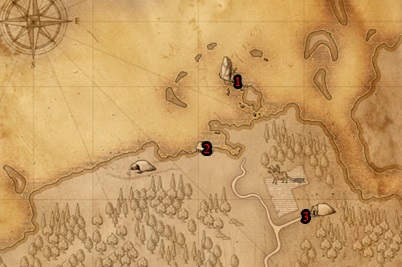 If you speak with the Vodyanoi Priest he asks you to kneel before the altar first. He’ll tell you that another Witcher was asked to deal with this problem and that the Humans and Vodyanoi are arguing about an underwater city which is now being used by the Vodyanoi but it was once a Human city. The Witcher assigned to the case is Berengar and you can find him at the Crypt (#4). He’s no longer interested in the case and lets you take it over.

There are 3 solutions to this quest. The Vodyanoi Priest will recommend taking the Prize-Winning cow over to the Dagon Temple. You can sacrifice it to lure out Dagon and kill him. Julian also wants Dagon dead but suggests killing his Acolyte at the Dagon Temple to lure out Dagon. The Lady of the Lake also wants to kill Dagon but doesn’t want to hurt anyone else in the process. She asks you to bring her an object from each side to symbolize the harmony of both societies. If you read the inscription on the Lady of the Lake alter you’ll have a clue as to the gifts you need to give her.

If you side with Julian head over to Black Tern Island and go to the Dagon Temple. Kill the Acolyte to lure out the Dagon Worshippers. Eventually Dagon will appear. You can’t hurt him directly but he loses health every time you kill one of his Worshippers. There’s about a dozen of them. Once they’re all dead Dagon himself will die and drop the Dagon Secretions and a Sun Rune, among other things. Go back to Julian to be rewarded with a Huge Diamond that’s worth about 300 Orens.

The Priest wants you to lure the Prize-Winning Cow to the Dagon Temple and sacrifice it. You’ll need some Dried Fruit and Nuts to lure the cow. If you don’t have any you can buy them from the Baker in Murky Waters. Give the Dried Fruits and Nuts to the cow and it will follow you. Head over to Black Tern Island and go to the Dagon Temple. Once the cow has entered the temple you’ll be able to attack it. Make sure you kill it quickly or it will run away and won’t follow you any more.

If you successfully lured and killed the cow in the Temple Dagon will arrive and you’ll have to kill all of his Worshippers to kill him. Head back to the Vodyanoi Priest for your reward, the Ceremonial Sword of Deithwen.

Lady of the Lake’s Plan

You’ll need to collect the proper gifts for the Lady. Look at the Statue of her in the Lakeside and read the inscription. An Alabaster Figurine was given to the Humans and a Gold Bracelet to the Vodyanoi. Ask the Vodyanoi Priest for the Gold Bracelet and ask Julian for the Alabaster Figurine. Take both the gifts to the Lady of the Lake on Black Tern Island and she’ll give you the Lady of the Lake’s Ruby. Take the ruby and place it on the Alter in the Dagon Temple to lure out Dagon who will attack with his Worshippers. Kill all the Worshippers to kill Dagon and return to the Lady of the Lake who will reward you with a Silver Talent, representing a part of Geralt’s memory.

However you complete this quest the Lady of the Lake will Knight you and give the the sword called Aerondight. Once this quest is complete the Country Inn will be locked so make sure you’ve finished with the Inn and Innkeeper before completing this quest.