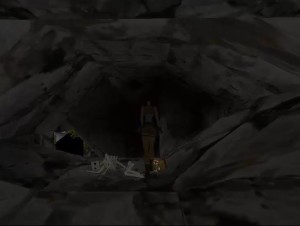 Run down the tunnel until you reach a dead end. There is a rock on the right side that you can jump and grab up to. Climb up the rocks until you come to a skeleton and a large medi pack.

Just ahead is the Lost Valley and you’ll encounter some very nasty dinosaurs in this area!

Jump down and get your guns ready because you’ll be attacked by one velociraptor and then another.

As you run forwards into the Lost Valley after killing the first two velociraptors you may notice a loud thumping noise that shakes the ground. A T-Rex will come charging at you from around the corner! 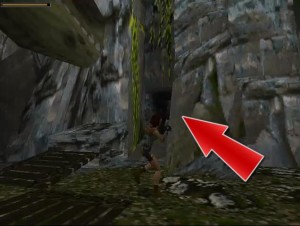 Your best option here is to run into the cave just to the left of the waterfall as you can see in the picture to the right.

You can either snipe the T-Rex from here or run through the cave to an exit higher up. Inside this tunnel is another velociraptor so keep your guns drawn.

Continue further into The Lost Valley and take out the two velociraptors who approach. Continue towards the temple and go inside. 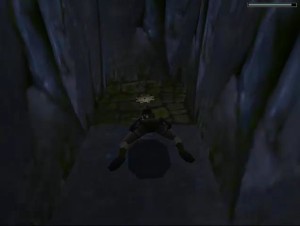 Take a dive into the pool on the right hand side and swim down. You’ll find a machine cog. Pick it up and head back outside. 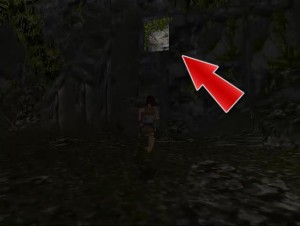 As soon as you exit the temple keep to the rock wall on the right until you spot a cave entrance that you can climb up to.

Run down the tunnel. There are no enemies here so you don’t need to worry. The tunnel will come out to a broken bridge. It’s a large gap and you’ll need to line this up correctly if you want to make the jump.

To make the jump sneak up to the edge of the bridge, take two hops backwards and then do a running jump while grabbing the other side of the bridge.

On the other side of the bridge you’ll find the second machine cog. Slide down the rock to safely drop down. 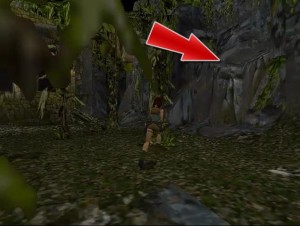 Now it’s time for the first secret. Run back towards the temple and on the right hand side is a rock that you can climb up onto. Have a look at the picture to the right to see what I’m talking about.

Watch the video above from 8:40 onwards to find the first secret. Do a standing jump to the next three rock ledges and then finally onto the temple roof. 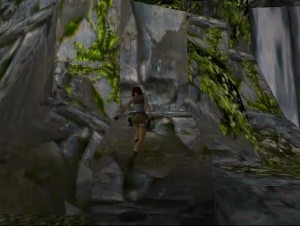 Climb up twice and then jump to the ledge to the right. From here you’ll be able to jump up and hang onto a crack in the wall.

Work your way across to the right and when you are in the middle of the waterfall climb up. Deeper into the cave and to the right is the second secret with some shotgun shells.

Jump back down and to the other side of the waterfall is another cave entrance. Inside you’ll find some more shotgun shells. 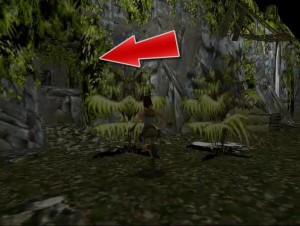 A little further down on the same rock wall is yet another cave entrance. Climb in and run around the tunnels.

Take out the velociraptor and head towards the underground waterfall. Climb up the rock on the right of the waterfall and continue climbing up until you find the third machine cog.

Climb all the way down and dive into the pool below. This is another out to the Lost Valley. 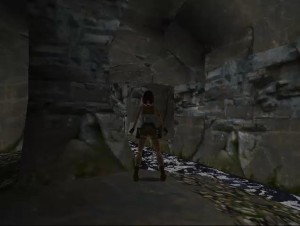 Run back under the broken bridge and all the way back to where you began to the skeleton where you found the medi pack. Jump down the rocks and run to the pool.

Climb up the rocks to where you began and get ready for some difficult jumps as you can see in the picture to the right. 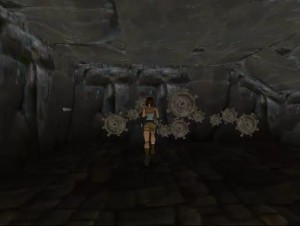 Run through the tunnel until you reach the machine with the missing cogs.

Place the three cogs in the missing positions and then pull the level to the left.

Before you leave this area drop down on the left side and hang onto the crack in the wall. Grapple over to the left. Drop onto the rock below the waterfall and run into the cave for the fourth secret. Inside you’ll find a large medi-pack.

Dive into the water and swim to the other side next to the underwater gate. Take the tunnel to the left. Take a deep breath and follow it all the way into a secret room for secret number 5. You’ll find some shotgun shells and a small medi-pack. 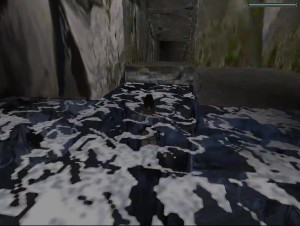 Head out of the exit and jump over a rock into the large pool where you began.

Now that the waterfall has stopped flowing you can see a secret tunnel. Run through it, past a door to end the level.

In the next level you’ll head into the Tomb of Qualopec.