As soon as you enter the level jump to one of the low ledges on the left or right. This will take you out of harms way from the lions that immediately attack.

After killing the lions run into the room and to the right you’ll find a movable block. You can either push it or pull it to open two different doors. Start by pushing the block forward one place to the Omega sign, Ω, which will open the door at the end of the room. 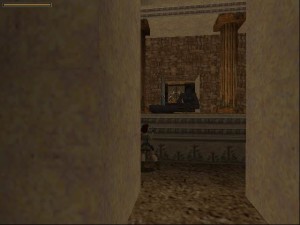 Run in with guns drawn and kill the two gorillas. You can stand at the doors entrance and flip backwards out of the way if the apes get too close to you. Once you go inside the door will close behind you.

Pull the lever at the other end of the room and then go up the stairs to the right to pull the second lever. A third gorilla will appear here so be careful.

As you exit this room Pierre DuPont will appear and start firing on you. Take him out and make sure to break line of sight periodically. This will give him a chance to run away without you seeing him. Otherwise he may continue to stand and shoot.

With Pierre DuPont out of the way pull the movable block back two spaces to the other Omega sign, Ω, to open a door on the top level. Now push the block three places, as far as it will go, towards the Gorilla room. 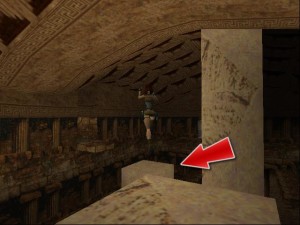 From here you want to turn around to your left and jump diagonally across to the lower pillar. The picture to the right will show you which one you need to jump to.

Now jump to the ledge on the upper level. The next part is very tricky so don’t worry if it takes you a few tries to get it.

Jump forwards onto the ramp and then Lara will flip backwards and then flip sideways. Hold onto the action key/button so that Lara grabs the ledge when she’s close enough.

If you’ve made it this far give yourself a pat on the back! If you’re still not sure what you’re supposed to be doing watch the video above starting from around 4:30 Inside this secret room you can grab some shotgun shells and a large medi-pack. 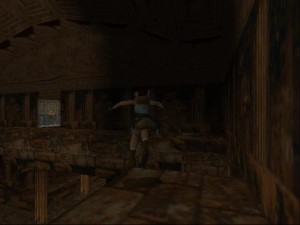 Drop back down and head out to the ledge. Jump back to the pillar where you found the first medi-pack and then across to the ledge on the wall.

You can either slide down the ramp facing forwards or backwards. Either way you need to make sure you land on a lower ramp, just under the long way and use that to flip across to a doorway on the other side. 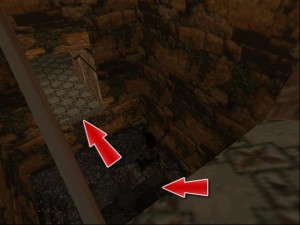 The picture on the right will show you the sequence, otherwise watch the video above at around 7:10.

Inside pick up some shotgun shells and a small medi-pack. Don’t exit the way you came instead head towards the small alcove and drop down.

There is a switch here to drain the water but DON’T pull it just yet. Target the crocodile in the water and try to kill it if you can. Then dive in and get out half-way through the tunnel for the third secret room.

Now go back and pull the lever to drain the water. Drop down, kill the crocodile if you haven’t done so already, and run to the other end of the tunnel. Take the stairs to the right.

Large Room With The Four Doors 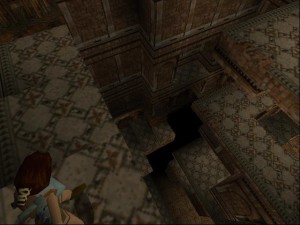 There is a large room with central columns and platforms. There are four switches scattered about the structure which open four doors. I’ll give you an overview of where to find them first before showing you how to get past each door.

Make your way from the top, the 5th level, down to the ground floor, pulling all of the switches as you go. Here’s where you can find them.

On the ground level you’ll also find the door you need to open to leave this level. 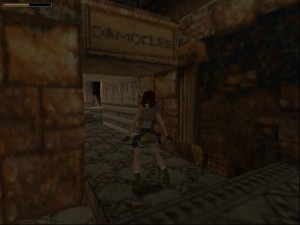 On the first level you’ll find the Damocles door. Before you go inside do a standing jump from the step in front of it to grab onto the ledge above the door and grab the large medi-pack.

Now run inside. You may notice some swords hanging from the roof. We’ll have to worry about these on the way out.

Run to the other side, stand on the pressure plate to open the door and go on through. Pick up the key on the platform and jump straight up to climb up to the level above.

Pick up the small medi-pack and shotgun shells before jumping back down. Walk back to the sword room and move slowly. Swords will start falling from the roof as you go. Walk slowly and avoid the shadows that the swords cast as they drop. 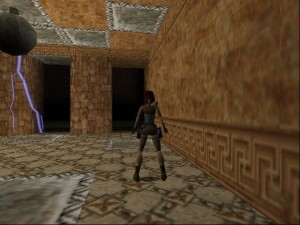 The Thor door is found on the second level of the large room. The first thing you need to do is stand just where Lara is standing in the picture to the left. This is the end of the first square in line with the first grey square in the room. You’ll be safe here.

From here do a standing dive to get out of the room without taking any damage.

In the next room stand on the pressure pad until Thor’s hammer drops and then jump out of the way.

Grab the small medi-pack on the top platform then do a running jump across to the middle ledge where you’ll find Thor’s key.

Do the same dive & roll jump to get back through the lightning room. 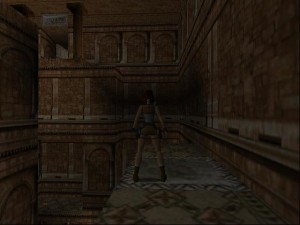 We’re going to take a break from the doors to find the last secret. You’ll need to move quickly and make sure you have enough health to take a few falls. A pressure pad on the 4th level (same level as the Thor switch) on the side of the room is where you begin.

Look at the picture on the right for your starting position.

1) Hop back twice and the second time hold the action key to hold onto the ledge. Let go and drop down.

2) As soon as you hit the ground do a forward roll to turn around and run straight ahead until you drop down.

3) Do another forward roll to turn around and run straight ahead until you drop off.

4) Run straight ahead through the secret door.

By now Pierre DuPont will be waiting for you on the ground floor. Shoot him until he runs away. 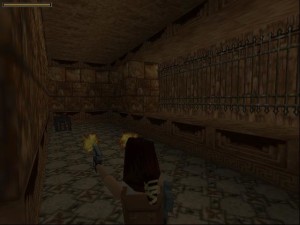 The Atlas door is found on the 3rd level above the ground floor. As you enter you’ll be attacked by a gorilla. Take out the gorilla and then stand on the pressure plate to open the gate.

Drop down to your left to pick up the small medi-pack. Climb back up and head up the ramp.

As the boulder starts rolling towards you do a standing jump straight up to jump over it. Then climb up the ledge to the left and one more ledge to grab the Atlas key. 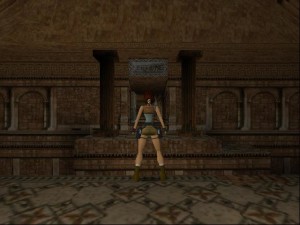 On the top level you’ll find the Neptune door. The Neptune room consists of a very deep pool of water.

Dive down into the pool. The key is at the bottom of the pool behind a closed gate. To open the gate pull the lever in the alcove to the left. Grab the key and get out of there before your air runs out.

Work your way to the bottom of the room and kill the two lions who are probably lurking around below.

Use the four keys to open the door on the ground floor and exit the level. In the next level you’ll be heading into the Colosseum.