Head to the left and grab the nut from the tree. Roll it along to the right to build a snowball. Jump on the snowball so you can climb up. 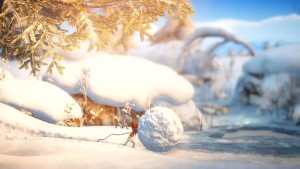 Grab onto the next tree and lasso to the tie point on the left to make the nut fall. Roll this across to the right and into the cave. Jump on the snowball and grab the next checkpoint. Come back out of the cave for the first secret, which is actually labelled as the second secret in the game.

Climb up the tree and build a small bridge jump up to the branch shown in the pic below and start jumping until you grab the secret hidden in the branches. The secret can’t be seen at all as it’s completely hidden by the branches you’re standing on. 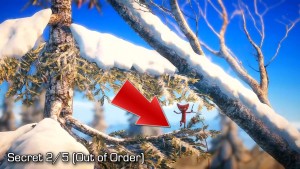 From here swing across to the left a few times to find the first secret. 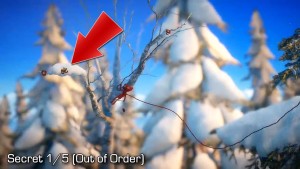 Drop down and climb up to where you came to the first secret of the level (second secret) and keep climbing the tree. Roll down the other side of the tree and grab the next checkpoint.

Make two yarn bridges. Jump up to lasso the pinecone and push it across. 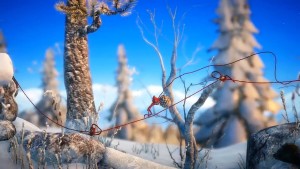 Push the pinecone into the snow to make a snowball and then roll it into the cave to break the ice. Grab the checkpoint inside the cave and then swing underneath it to grab the third secret. 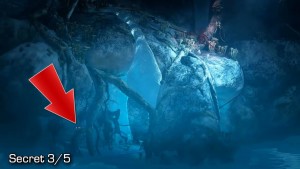 That’s all you need in the cave. Head back out and start climbing up the rocks to the right.

Climb up the broken log and swing over to the left twice to drop the nut from the tree. Roll it to the right to make a snowball. The weight of the snowball on the broken log show break a part of it off which you will ride down the slope. 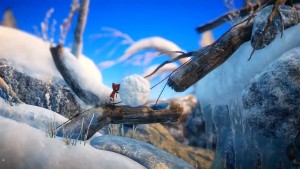 Climb up the rocks and hop onto the snow covered branch. It will fling you up a few times and you’ll collect the fourth secret. 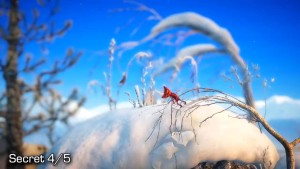 Fall into the cave and jump or swing across the rock ledges as they collapse.

Go all the way to the exit blocked with ice and then up to the left. Swing into the branch shown below to use it like a sled. 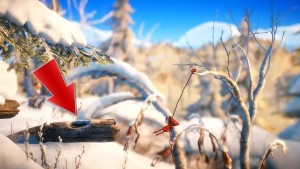 Grab the next nut and it will roll down, turning into a snowball. Across the field of ice you’ll need to put the ice back in the ice holes. The ice block on the right goes in the first hole on the left. Drag the larger one across to the right to fit in the second hole. Now pull the snowball across both of them and use it to climb up the rock at the edge.

Push the kettle off the wooden fire pit and then continue to the other side. Grab the nut and push it up two bridges to get the snowball onto the fireplace. 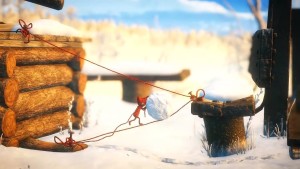 Untie the bridges so you have enough yarn. Put the snowball into the kettle to drop it down so you can climb up the lever to the right.

Tie a knot at the top of the branch and swing into the fifth secret. 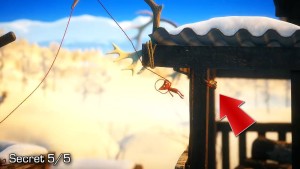 Climb to the top of the roof to end the level.