Climb over the cars and when you come to the tyres knock the last one off and it will roll down. You’ll need to jump on the tyre and on the cars to make it across. 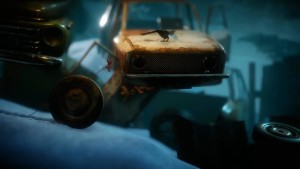 After the tyre section create a yarn bridge on the two pegs. Jump up and a little to the right and then swing across to the first secret. 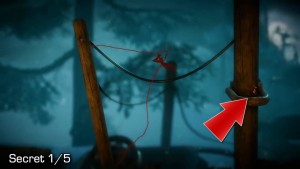 Drop back down and complete the swinging section.

For the second secret tie a yarn bridge from the wooden plank to the can on a string and push the weight down into the little hole. Use the bridge to jump over the barrel and then drop down to enter the wooden box from the right side. Inside it is the secret. 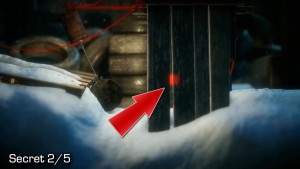 Climb back onto the barrel and swing twice across to the right. The first jump is to a can and the next is to some kind of chain. Let down a lot of rope and build up momentum for a really big swing. Swing across as far as you can to the left and you should land near a ledge where you can pick up the third secret. 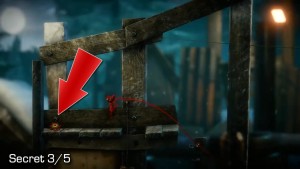 Drop down and climb back up the barrel. Swing across to the can and then the chain as before and this time do a massive swing across to the right and through a window. The camera will pan to where you need to get to.

The next puzzle is quite interesting. You’ll need to turn on the magnetic lift and lift the metal piece over to the right above the box. Turn it off to drop the metal and smash the box. The fourth secret will appear from inside the box. 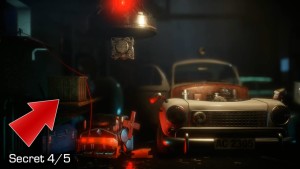 To move the magnetic lift jump on the four buttons. The left button moves it to the left, the right button to the right and the center two buttons up and down. The pedal to the right of it turns it on and off.

Once the secret has been revealed take the metal item and lift it over to the wooden palette on the far right. Turn off the magnet and go and pick up the secret.

Climb over the car and build a bridge to the other side. Jump up, hook onto the scissors and pull yourself up. Drop down onto the lever to open the garage door. 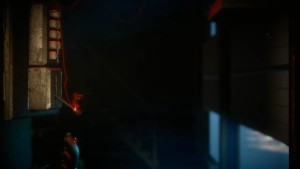 Climb up and swing over to the small wooden ledge. Tie a knot, drop down and swing through the garage door to go outside. 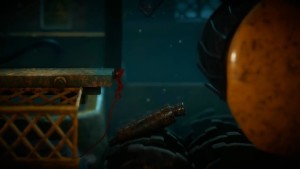 As the yellow metal part falls down from the top conveyor belt hook onto it and drag it up. Push it up the metal beams to the top where you can use it to push a button. 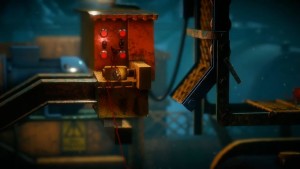 Drop off the edge and swing underneath the metal piece that lifted up to the next checkpoint.

At the end of the next conveyor belt create a yarn bridge and jump over to the car crushing area.

Pull down the lever at the back of the car to open the hatch. Go inside and down to the floor to pull the seat back so it folds forwards. Hop onto the seat and open the glove box. Inside the glove box is the fifth secret. You’ll need to be quick or you’ll be crushed along with the car. 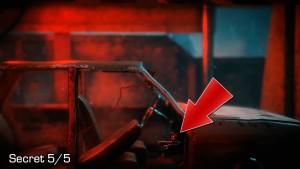 Walk forwards into the snow to end the level.