Climb up the ladder for the final series of boss fights.

Kyvok has a few different attacks and is probably the most difficult of the three bosses you’ll face. He’ll shoot at you with his chain gun, fly above dropping bombs from above, do a large jumping downard swing with his sword and shoot out his grapple.

You can parry or block the chaingun attack but it’s probably easiest to dodge out of the way. 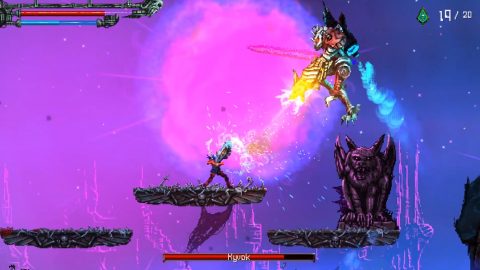 The bombs are easy to avoid. When he flies overhead shoot upwards to destroy any bombs above you. Stay on the top platforms to stay out of range of any explosions.

The sword attack is more difficult to avoid. You want to make sure you stay behind him when he strikes down. He’ll stay down for a few seconds giving you a chance to get in your own melee attacks.

When Kyvok sits in one of the corners he’ll throw his grapple at you. It has a long range so jump away from it when it gets close. 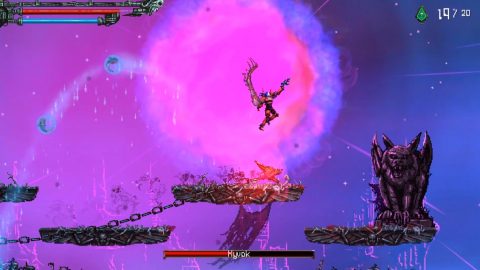 When Kyvok is defeated he’ll drop a Heart. Grab it and get ready for the second boss.

For this boss you’ll be fighting the 2 hydra heads on the left and right. I found it easiest to focus on the one on the left. Dodge out of the way when the head smashes down and get in a few attacks. When the head on the right shoots a fireball at you jump over it. 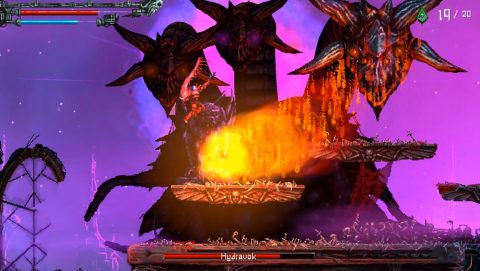 The head on the left also has a flame breath attack. Jump over it when it gets close to you and keep on firing.

After the first head has been defeated it will drop some Health. With only one head to deal with the second part of this boss fight should be much easier. Finish off the second head and get ready for the final boss.

You’ll be lifted up into the air with the rubble from the platforms. Use your heavy weapon to do as much damage as possible and then get in close for some melee attacks to replenish your energy. Once Hydravok is down to half health he’ll release two flaming jets. 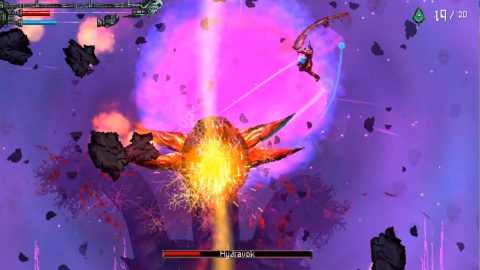 Avoid the fire jets and keep hitting Hydravok. This boss fight is pretty easy. Just avoid the debris and getting too close to the flames and you’ll be fine.

One Hydravok has been defeated you’ll have one last chance to strike the fallen beast and the game will end. Congratulations on completing Valfaris!