The Exterminator doesn’t survive the fall but you are fine. Shoot the red button to open the door to the right. There are some tougher enemies to deal with. The first is a Sentry Bot. It floats above the platform, targets you with lasers and then shoots a machine gun. Try to get close and destroy it with your sword.

Jump onto the moving platforms and hit the two red buttons to open the next door to the right. 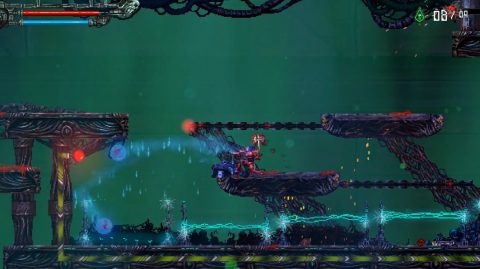 Walk to the right, take out the boxes preventing you from shooting the red button under the ledge. Once you hit the button you can continue to the right. You’ll face a new enemy, the Sword Master. The head is always vulnerable but he’ll block any other attacks.

Try to parry his sword strike to stun him for a few seconds. Then you can move in for a few melee attacks. 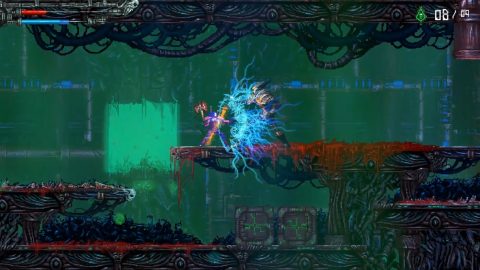 Shoot the lever in the roof to open the door to the right and go through for a Resurrection Idol. Grab it and then climb to the ledge above to find the Bringer of Mayhem. Climb up to the checkpoint.

Head to the lift to the right and ride it down. Take out the Drones as you go. Once you reach the bottom you’ll be attacked by an Atom Splitter and Soldiers. 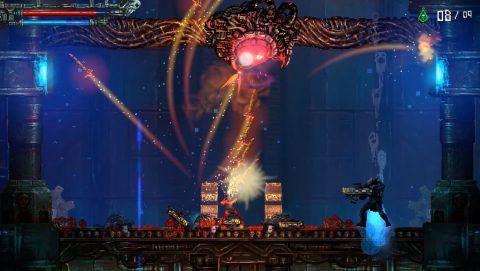 You’ll need to be quick to take out the soldiers before getting a few shots off on the Atom Splitter. Once it’s destroyed it will drop a Blood Metal and the doors to the left and right will open. Take one of the doors and slide down to land on a ledge with a Resurrection Idol.

You’ll need to take both paths to the left and right but you can choose which way you go first.

Save at the checkpoint and then monkey swing across the beams while avoiding the lasers of the Tetra Drones. You can’t shoot them but you can kill them with melee attacks.

Jump up the platforms and then jump across to the right to destroy the Tetra Drone and slide down for the Resurrection Idol. 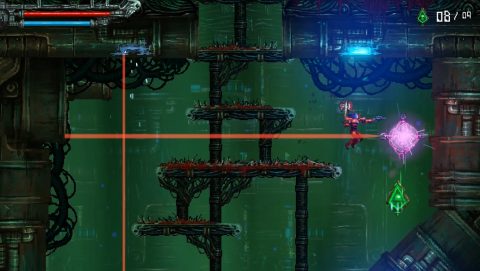 Jump up to the room above. Kill the Sword Master and climb up both columns to hit the two red buttons. One is protected by a Sentry Drone and the other by 2 Tetra Drones. Once you hit the buttons the door to the left opens.

Grab the checkpoint and climb up the moving platforms. Kill the Sentry Drone up the top and make your way top the left, picking up the Resurrection Idol along the way.

Make your way past some more Tetra Drones to a Resurrection Idol above. Now head to the right, past some moving platforms and soldiers and take out another Sword Master. He drops some Blood Metal. 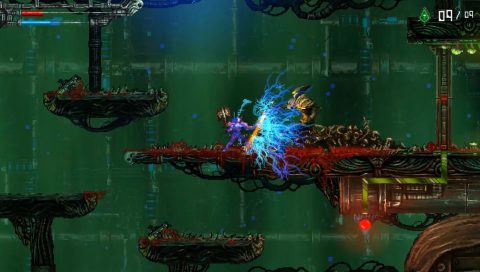 Shoot the red button and go through the door to the right to the next checkpoint.

For Secret #1 ride the second chain down. 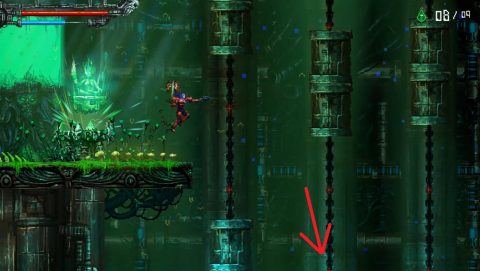 At the bottom you’ll find a Resurrection Idol. 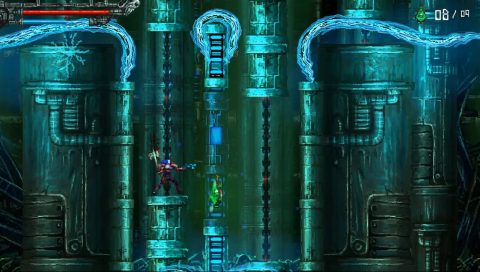 Ride the next pillar back up and grab the Unlimited Energy before the next battle. You’ll be attacked by Drones, Soldiers and a Sword Master. Make sure you grab the Resurrection Idol in the center platform. Once you’ve killed them all you can drop down to the next checkpoint. 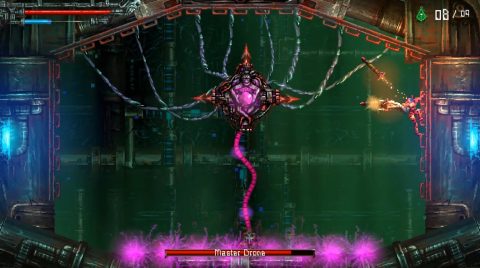 Move after it locks on it’s laser, drop down from the center and get a couple of swipes with your sword to replenish your energy. Repeat until you get to the second phase.

For the second phase the Master Drone will send out 2 grapples at once. This makes it harder to dodge. Try to stay outside of the 2 grapples. The process is still the same. Climb up one side of the wall and shoot at it. Drop down for a sword strike and repeat.

Once the Drone has been destroyed drop down to destroy the first power source. Grab the Resurrection Idol and return to the center of the Power Chamber.

Grab the checkpoint and ride the platforms up to the right. Take out the Drones or avoid them and then make your way past the Sentry Bot and soldiers to the right. You can shoot the button in the roof to release the Energy and Heart before dropping down.

Destroy the Turrets as you make your way down to the bottom. You’ll pick up a Resurrection Idol along the way. At the bottom you’ll need to destroy all the Turrets so you can safely shoot the button and open the door to the right.

Take out the Soldiers and Master Swordsman. He drops a Blood Metal. Then shoot the button and continue through the next door to the checkpoint. 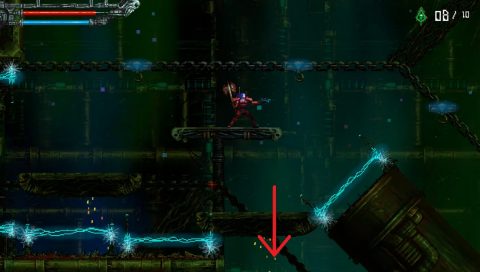 Take out the Turret and Sword Master before picking up the Blood Metal from the pile of skulls. 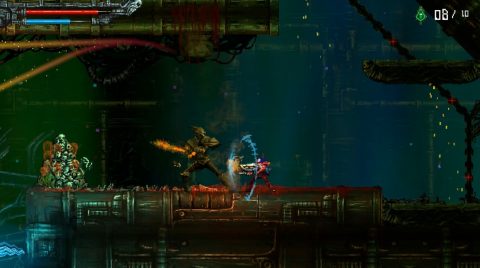 Ride the platforms back up and grab the Resurrection Idol. Jump to the jain and ride it to the left for another fight with the Atom Cutter. 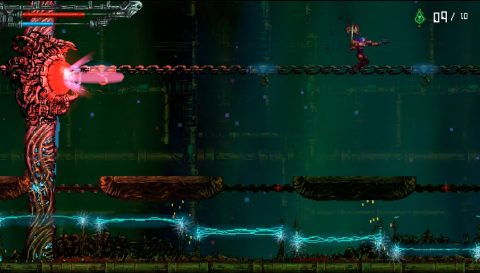 Once it’s destroyed continue on the chain to the left. Drop down for the checkpoint.

This boss fight is easier than the last. The Master Drone will chase after you releasing a cloud of toxic spores. He also releases fiery rocks behind him that bounce around. 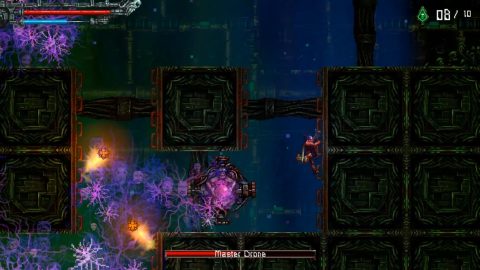 Shoot the drone as much as you can, run away, turn around and hit it again. Repeat until the Master Drone has been defeated.

Drop down, break the power source and grab the Resurrection Idol as you slide back to the center of the power chamber. Drop down through the open bulk doors to the underground.

Under the Power Chamber

This area is filled with Big Jellies. They spawn out of the Jelly Sacs so focus on destroying the sac to stop them spawning.

On your way down you’ll find Therion’s Call. A pistol that shoots like a railgun and penetrates multiple targets.

Make your way through the cavern, destroying the Jellies as you go. Jump over to the Resurrection Idol but watch out for the Soldier that spawns on the platform behind you. 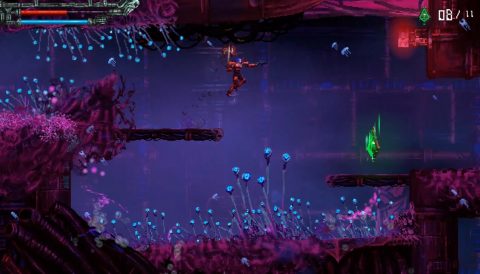 In the next chamber jump your way up the ledges while avoiding the rolling Jellies. The soldier up the top has a plasma gun. Deal with him and then climb up through the top of the chamber to the next checkpoint and Blood Metal.

Climb up the ladder to the left, kill the Soldier and jump up to the wire above. Secret #3 can be found by climbing across to the left. 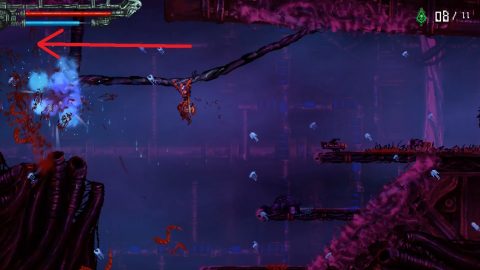 Jump up for a pile of skulls with Blood Metal. Then drop back down and continue to the right. Kill the tentacles and get ready for a boss fight. 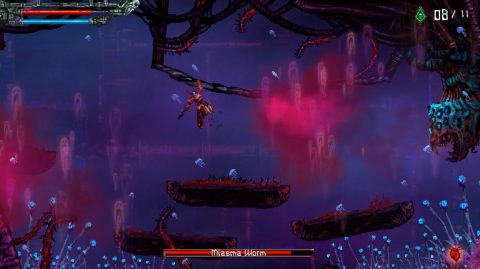 The Miasma Worm shoots out clouds of toxic poison that damages you if you touch it. Drop down to the lower platform to lower the cloud down, then jump up to the wire and get a few shots off at the worm.

The clouds will be released faster and faster the more the worm is damaged. Once it’s killed you’ll be able to jump across to the right. Slide down, grab the Resurrection Idol and go through to the left for another boss fight.

Lord Jylskel has a few different attacks. The first is a tentacle grapple. He’ll pull you closer and hit you with his sword. Use 2 melee attacks to break the grapple before you’re pulled too close. 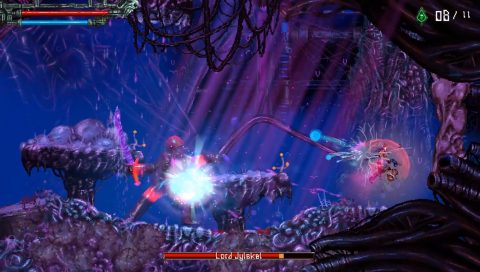 The tentacle attack can be telegraphed by the bits of dust on the ground a second before the tentacle reaches up from the ground. Just step out of the way and keep firing.

The third attack is shooting out plasma globules. Just shoot them before you get hit and try to stay back. I find this boss is easy if you stay to the right side of the screen as far away from Jelskel as possible.