Climb up the vines to the left and take out the Blood Fiend. There’s another Blood Fiend above and a third that spawns in when you go for the Resurrection Idol. 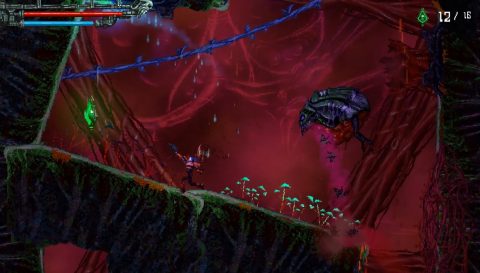 Climb across the vine and break the large block to your right. This leads to Secret #1. 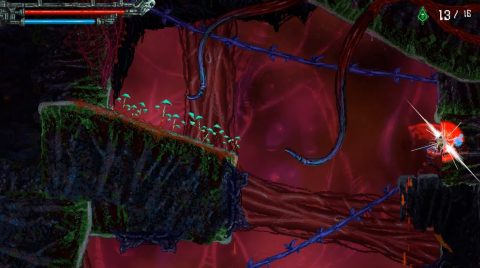 Make your way across the vine while avoiding the Snatchers. On the other side you’ll find Blood Metal. Climb back the way you came and continue up to the checkpoint.

Run to the right while killing or avoiding the Reavers and Tentacles. You’ll soon face a new enemy, the Jelly Spore. They may look easy to kill but the sheer number of them might cause you to bump into a few of them and take damage.

Continue to the right and destroy the stone ruins. The Second one has Blood Metal inside. In between the two of them you’ll find a Resurrection Idol.

Climb the vines and get ready for a boss fight with the Bloodroot Demon. This boss is easy to kill from up close but will close it’s shell and send out a demon which spawns spirits. If a spirit touches you it will cause you to hallucinate. If two or three touch you in a short time it’s instant death. 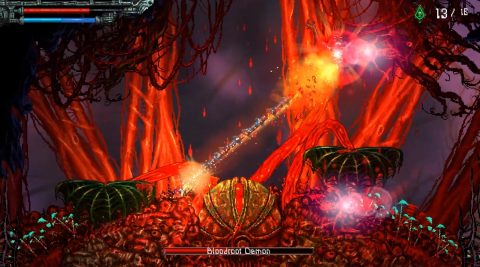 Kill the demon on the end of the vine as quickly as possible and jump over the spirits. Once the shell opens keep slicing away at the interior of the Bloodroot. It sends out a wave of fire intermittently with increasing speed so make sure you get up onto the leaves at that point.

Once the Bloodroot Demon has been defeated it will drop the Blood of Valfaris. You can use this to upgrade one of your weapons to level 4. Walk to the right for a Resurrection Idol and Blood Metal.

Walk to the right and drop down. There’s an Exterminator but it will take a minute to get operational. Hold your ground and defeat the enemies until the robot is ready.

Climb up the metal beams and then up the ladder to the next checkpoint.

Use the steam vent to boost up to the ledge above and take out the Blood Fiends. Continue up into the spider’s nest. Climb up the ladder on the left and shoot the button. Drop down and then break the blocks on the right side for Secret #2. On a ledge to the right you’ll find Blood Metal in a pile of skulls. 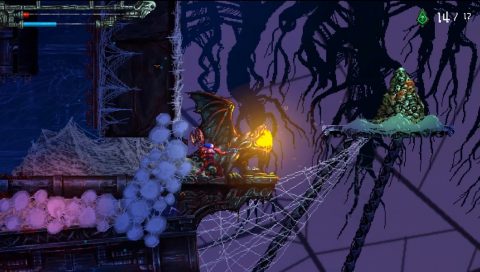 Jump back and climb up the ladder. Take out the blood fiend, drop down in the center and grab the Blood Metal. Climb up the center ladder. Shoot the button and use the steam vent to boost up through the seal before it closes. 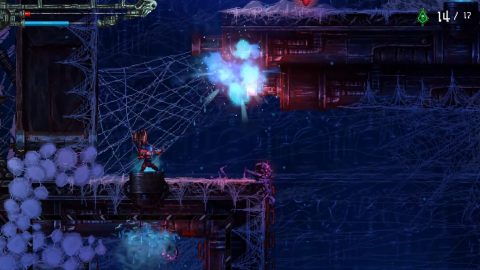 Continue up for a boss fight with Arach. This giant spider will spit at you from time to time. Just keep moving and use your melee attack to deal with the little spiders to replenish your energy. 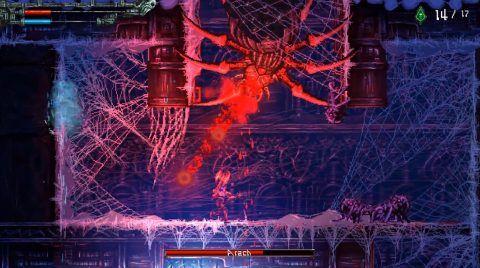 After Arach is killed it will drop the Leg of Arach. Climb up for the Blood of Valfaris and to destroy the bridge power supply. Jump up to the left for the Resurrection Idol and slide back down to the Exterminator.

Walk across the bridge and bash through the steel beams. Continue to the right for the next checkpoint.

Head across to the right taking out the enemies as you go. There’s a Resurrection Idol waiting for you after you defeat a Stone Golem. Jump across the gaps and continue to the next retracted bridge. Climb across the wire the checkpoint.

Climb up the ladder into a room with a lot of enemies. Do your best to clear them out. There’s two buttons you need to press. One over to the right under the ledge and another to the top left. Once both buttons have been pressed the hatch above will open.

Once you climb up you’ll be attacked by a Sword Master and multiple Missile Turrets. Continue up and around to the right. Climb up the ladder to the top and destroy the bridge power supply. Slide down the wire to the Exterminator. Head across the bridge to the next checkpoint.

For the first phase you won’t be able to do any damage. Just follow along as close as you can while destroying the missiles and jumping over the mines. 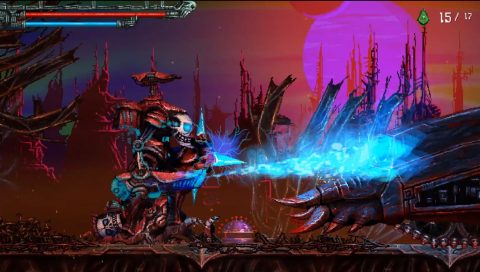 Once you get close enough to the tank you’ll be able to climb on top and start doing damage to the Desolator. Watch out for the laser beam that signals a rail gun shot. Missiles will still be flying out from the side of the tank so be careful you don’t take too much damage. 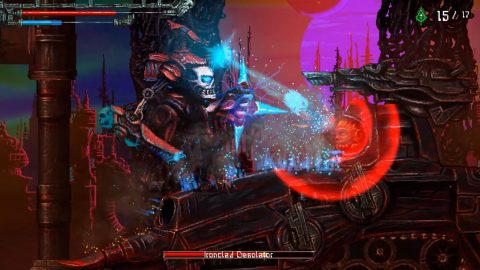 Once the tank has been destroyed Kyvok will run away and leave behind a Blood of Valfaris. Grab it and continue to the right to end the level.

Next: The Cathedral (Level 9)