This level is a bit longer and more difficult than the previous two. Head to the right for the first enemy, the Hive Worker. It shoots toxic orbs and leaps at you if you get close. Just a little way to the right you’ll spot the first Resurrection Idol. 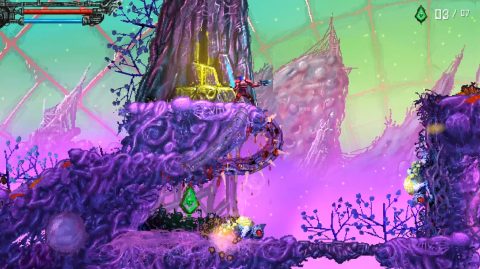 To the right you’ll need to break the pustule that powers the door to the right. Once it’s open go through to the next checkpoint.

Drop down for a Resurrection Idol and a battle with Hive Hunters and a Hive Soldier. Once the soldier is killed it will drop a Pheromone that you can use to open the door to the right. 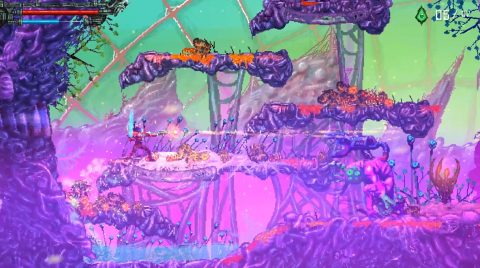 Follow the tube up and take out the pustule to open the seal below. Drop down, take out the Hive Hunters and then continue to the left. Make your way up to the Resurrection Idol and bounce across to the waterfall.

Drop down the vines and shoot the next pustule so you can continue down through the seal to the checkpoint.

Before bouncing across to the right drop down and destroy the balls to the bottom left. This leads to Secret #1. 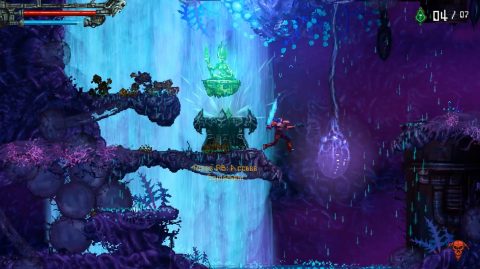 Ride the platforms up to the Resurrection Idol. 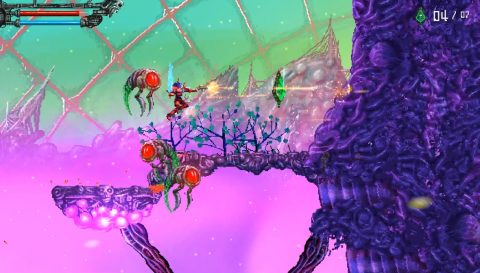 Drop down and go back to the checkpoint. Use the bud on the vine to bounce across and then use the worms to ride through the next cavern. Drop down to pick up the next Resurrection Idol. 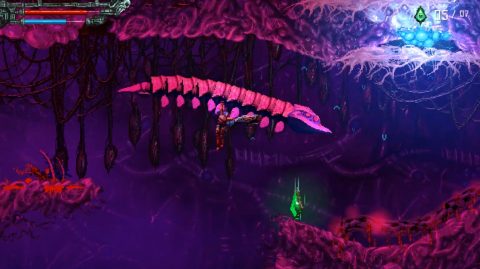 Drop down to the energy and drop down through the ledge to avoid the spikes. When you see the vines with the buds jump over to the them and bounce your way up to the next checkpoint.

Kill the Swarmers and then the swarm nests to stop them from respawning. Access to Secret #2 is up in the top right. Shoot the balls and then climb to the room above. 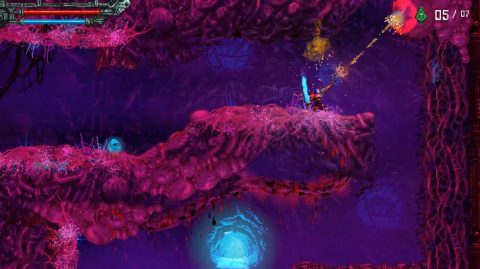 Grab the Unlimited Energy and kill all the enemies. After the battle you’ll be rewarded with the Blood Axe. 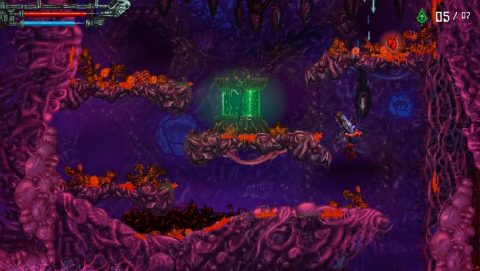 Drop down and continue down, killing the Swarmers and nests along the way. Break the two pustules to open the seal at the bottom of the chamber.

Drop down and fight another Hive Soldier. Once you kill it pick up the Pheromones and go through the seal to the right. In the next room you’ll find another weapon, the Man o’ War. Drop down to the next checkpoint.

Take out the Swarms and Snatchers, the man eating plants to the next Resurrection Idol. Climb up the vines and break the pink pustule to open the hatch above to the next checkpoint.

Ride one of the worms along through the caverns and break the pustules before you make it to the electric barriers. Jump off the worm to the buds on the vines and bounce across to the right. Grab the next Resurrection Idol and head right to the next checkpoint hidden in the plants. 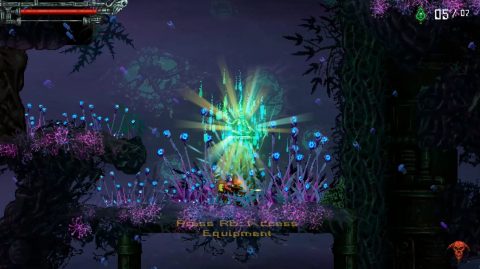 Climb up, walk to the right and the wall will close behind you. Make your way up the vines while avoiding being knocked off by the Hive Hunters.

Grab the Resurrection Idol and then drop down for a battle against 2 Hive Soldiers. You’ll need both Pheromones to get out of this chamber. 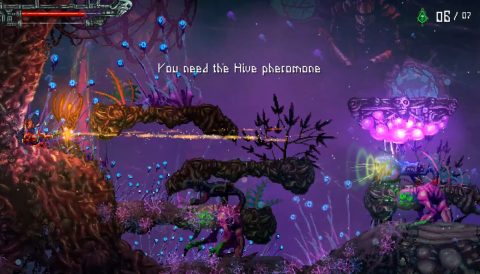 Place a pheromone on either side of the chamber and then drop down the center hatch.

To the left you’ll find Blood Metal and to the right Energy. Drop down for the boss fight with the Hive sentinel. 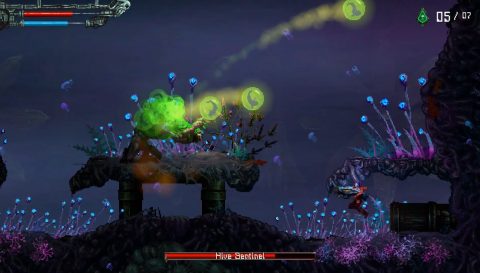 The Hive Sentinel throws globules at you which explode and he also has a big laser attack which is easily telegraphed. The globules have a large explosion so they can be difficult to avoid. I find it’s best to follow him around the arena and use the sword to deal the most damage. Once he’s been killed he’ll drop the Embryon.

Run to the right, grab the Resurrection Idol and make your way around to the next checkpoint.

Drop down to where you see the guards and hive creatures fighting each other. Quickly make your way to the right and pick up another Resurrection Idol along the way.

Use the vine to bounce up for Unlimited Energy and quickly drop down. You’ll need to take out another Hive Soldier. Kill, grab the pheromones and come back the way you came. Use the pheromones to open Secret #3. 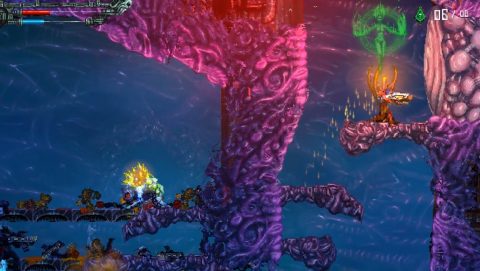 Inside you’ll find a Resurrection Idol and Blood Metal. Make your way back to the left and shoot the balls so you can continue left.

Drop down to another chamber. Kill another Hive Soldier and use the pheromones to open the door to the right.

You’ll enter a new area with slugs hatching from hatching from nests. Quickly make your way through. About half way shoot a ball in the roof. This drops down and turns into a vine with a bud. Bounce up to the skull pile for Blood Metal. 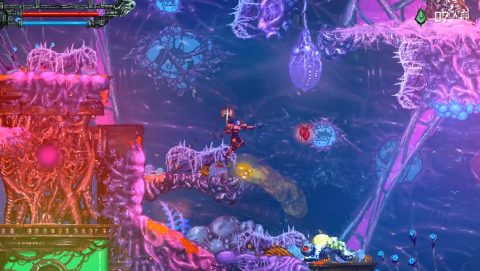 Drown down for a Resurrection Idol.

The Exterminator has a few attacks that once you’ve learned aren’t difficult to avoid. 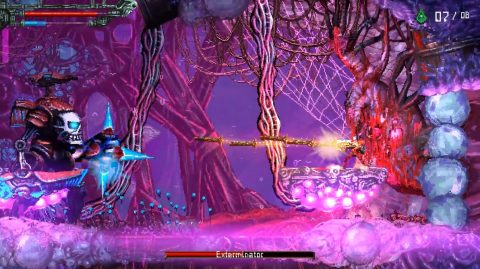 The Exterminator has a flame thrower attack, a cannon and a close combat bash. Shoot at it from a distance and duck or jump on the platform to avoid it’s ranged attacks. When it gets close jump over the top of it and run to the other side.

Once the Exterminator has been defeated stand on top of it and quickly jump when there’s 1 second left to avoid the explosion. Head to the right and jump in an Exterminator of your own. Walk back to the left and you’ll drop down to the next level.