Early the next morning at the new base camp a Captain is confronted by an emissary, while Arthas is away, who tells the Captain and his men to return to Lordaeron at once by orders of the King. They don’t want to face the undead so begin chopping their way through the forest.

When Arthas returns to the camp and finds out his men are returning to the ships he sets out to burn the ships down before they can get there.

Burn the Boats – Destroy the 5 ships before the timer counts down to zero.

All of the treasures on this map are dropped from creatures. There are 10 of them to find so I’ll just mention the most important ones here.

1) The Nerubain Queen just before the second ship drops the Claws of Attack +12!

2) A Skeletal Marksman will drop the Goblin Night Scope.

4) Close to the first ship a Crypt Fiend will drop the Ring of Regeneration.

After this map both heroes should have full inventories and plenty of good items.

You have 25 minutes to destroy all five ships. You won’t need to rush but just keep an eye on the timer as you go. You start off with four guys but you can hire mercenaries as you go along. 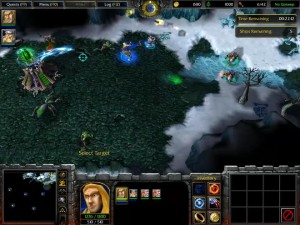 Head off to the west and you’ll first be attacked by 6 ghouls. Continue along the path to face a Spirit Tower and a few other nasties. They shouldn’t be much of a problem. Let Arthas heal up anyone whose health is getting low.

Past the Spirit Tower to the west you’ll find your first Mercenary Camp. This is where you can buy new troops for your army.

From here you can buy Ice Trolls, Ice Troll Priests and Ogre Warriors. Walk down to the south and take out the Spirit Towers.

There is a path to the west before going down to the lower level where you can kill a Marksman for the Goblin Night Scope if you want to grab it.

Follow the path to the south and take out some more Spirit Towers with Nerubian Spiders. One of them drops the Ring of Regeneration. Just to the south you’ll be able to take out the first ship. 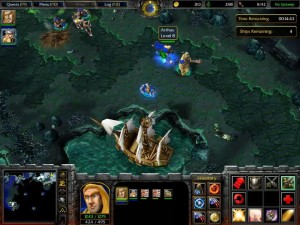 Continue to the south for another Nerubian Warrior and a Potion of Healing. Further along is a Nerubain Queen with a few other spiders. The Queen will drop the Claws of Attack +12.

Quickly take out the second ship. You should be able to get to this point with at least 15 minutes remaining.

Just south of the second ship is another mercenary camp where you can buy Ice Troll Beserkers and Ogre Magi. Probably the best option here would be to buy the Magi.

The path turns north here and you are faced with a few Murlocs. One of them by the river drops a Mana Stone. 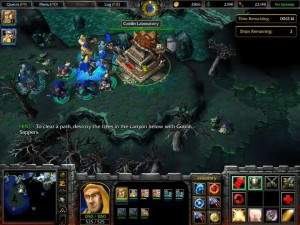 To the north you’ll find the path blocked by trees and a Goblin Laboratory, where you can purchase Goblin Sappers, a little further along.

Buy the Goblin Sappers and bring them down to the trees blocking the path. Use the Kaboom skill to clear the path of trees.

Once the path is clear you’ll be free to take down the third ship.

You should be able to get here with at least 11 minutes remaining. 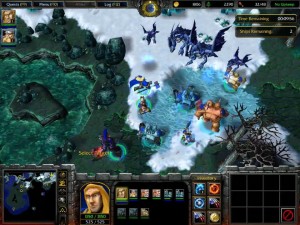 To the north-west is another mercenary camp with Ogre Maulers, Ice Troll High Priests and Ice Troll Trappers. Maulers have 750 health and the Priests are able to heal. Buy the units you want and head to the north where you’ll be faced with a couple of Blue Drakes and Dragon Whelps.

Continue to the east and south where you’ll have to run the gauntlet. Don’t worry about trying to take down the Spirit Towers just run for it as fast as you can and get as many units out of there as possible.

Once clear of the Spirit Towers you’ll be able to take out the fourth ship.

Follow the path around to the south and then the north. Here you’ll face your final challenge with two abominations, four ghouls, two crypt fiends and two necromancers. If you’re out of time run past them and take out the last ship, otherwise use your forces to smash your way through the Undead horde.

With no way home the army must return to the base camp and ready themselves for the last human mission for Reign of Choas, Frostmourne.