Arthas goes in search of Frostmourne in order to save his people seek vengeance. Mal’Ganis arrives and urges Arthas on. Muradin Bronzebeard is hesitant to join the Prince on his quest but in the end they both head into the waygate to find the sword.

You’ll need to keep an eye on both the heroes searching for Frostmourne and your base camp.

Locate Frostmourne – Find the fabled sword while keeping both your heroes alive.

Destroy Mal’Ganis’ Base – After claiming the sword you’ll be given a new quest to take out Mal’Ganis.

1) Ring of Protection from the first dire frost wolf.

2) Periapt of Vitality from the second dire frost wolf.

3) From the wendigo shaman you’ll receive a Potion of Greater Mana and a Tome of Agility.

4) The Nerubian seer has a Potion of Mana.

6) Potion of Greater Healing from the ice troll beserker.

7) You can get the Health Stone by killing the ice troll warlord.

8) Various items from the Goblin Merchant. 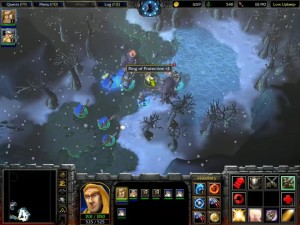 After the beginning cut-scene Arthas and Muradin will head through the waygate with the goal of finding the Frostmourne. Make your way north, taking out the frost wolves as you go. Some of them will drop some loot for you.

Meanwhile, back at the camp you will be attacked by abominations and ghouls so make sure you have tower defenses at the north and north-east entrances.

Carefully make your way north with Arthas and his team until you come across an elder wendigo and a wendigo shaman with the Tome of Agility.

Once you come to the graveyard head east and you’ll spot the level 10 Guardian. Keep your guys alive with the Holy Light and once you defeat him you’ll be given access to Frostmourne.

Once you come back through the waygate the captain will inform you that they are in trouble and need help. After Arthas comes back  Mal’Ganis will begin attacking the town.

There are two Undead groups here, the green and the purple. They will alternate attacking you in waves. Mal’Ganis is located in the green base to the north-east.

There is another mine just to the north-east of your base camp. You can take advantage of this to set up a forward camp if you like. It’s defended by Nerubian Webspinners but they shouldn’t be too difficult to take out with a few units and your hero. 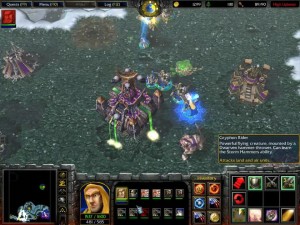 The purple base is located to the east and I found it easier to take them out first and stop the waves of purple units attacking. This will give you time to just focus on Mal’Ganis.

Arthas, a few mortar units, knights and riflemen should be all you need to take out the purple base.

To defeat Mal’Ganis I sent a wave of 6 Gryphon Riders, 2 mortar teams, 2 knights, a rifleman and Arthas.

Try to time the attack just after Mal’Ganis sends out a wave against you. His forces should already be depleted and it will make your job much easier.

Once you’ve taken out Mal’Ganis continue the journey with Arthas in the Undead Campaign.