Arthas meets the Prophet who tries to persuade him to travel across the sea to escape the dark forces. Arthas refuses to leave his land vows to protect his people. Jaina senses tremendous power in the Prophet and wonders if he’s telling the truth.

Destroy Plagued Villager Houses – The houses are plagued so they must be destroyed.

Stop Mal’Ganis From Claiming 100 Zombies – Mal’Ganis wants to claim the city. You must race him to 100 zombies.

1) An Enforcer camp is located to the west of your base. One of the tents hides a Tome of Strength +2  and one of the Enforcers has a Scroll of Town Portal.

2) A small rat in the zoo to the very west of the map named “Filson the Rat” drops a Talisman of Evasion. Destroy the gate to enter the zoo and either click on Filson 50 times to kill him or use a mortar team to attack the ground under him.

You begin in a small base to the north-east of the map. The town of Statholme has already been explored so you can see the entire map from the beginning.

If you want to get the Tome of Strength +2 send your small force with Arthas to the Enforcers camp just west of your base. The Tome is found in one of the tents. You’ll have 3 minutes to prepare on normal difficulty before Mal’Ganis starts converting villagers to zombies.

While the main objective is to attack the houses and kill the zombies you’ll still need to protect your base from attacks every few minutes. The first few waves aren’t difficult to hold off but they do get progressively harder as time goes on.

Build another tower on the south and west entrances to your base and defend them with a small group of footmen and riflemen. This should be enough to repel all the waves you will encounter.

To take out the 100 zombies build a small strike force with Arthas, a few footmen and as many knights as you can train. Remember you have 3 minutes to prepare but once Mal’Ganis arrives you’ll need to move quickly. 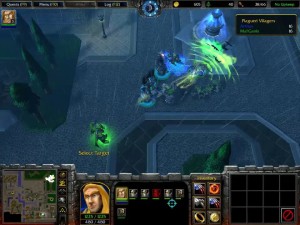 You might be playing catch up for a little while. If you run into Mal’Ganis try to take him out. He’ll attack you after you’ve killed 21 and 51 villagers. If you can kill him he’ll have to wait 3 minutes until he respawns, giving you vital time alone to kill more villagers.

Continue building up your resources as once you have your main base defended you’ll want to send out a second strike force to get the job done much quicker.

Mal’Ganis force will get progressively larger the closer you get to 100 kills so make sure you have enough knights around Arthas to protect him.

Keep replenishing your force as they are killed off and you shouldn’t have too much trouble killing 100 plagued villagers before Mal’Ganis. After completing the mission you’ll follow Mal’Ganis to The Shores of Northrend.