The Defense of Strahnbrad

While Uther heads out to deal with the orc encampment, Prince Arthas is told to defend the defenseless village of Strahnbrad from any invasion.

Defend Strahnbrad – You must take Prince Arthas and his warriors to Strahnbrad which is east of your starting position.

Kill the Slavemaster – The orc Slavemaster has been taking human prisoners. Find him in the north-west section of Strahnbrad and take him out.

Save Timmy – In the forest to the south a group of Gnolls have kidnapped little Timmy.

1) A Potion of Healing in the crate just left of where you start and between the two tents.

2) To the right of the start area and also hidden in a crate is a Scroll of Protection. This scroll enhances the defense of all units around the hero for 30 seconds.

3) When you slay the gnolls who have kidnapped Timmy one of them will drop a Potion of Healing.

4) You’ll be given a Ring of Protection when you rescue Timmy.

5) One of the bandits north of the path after rescuing Timmy will drop a Scroll of Healing.

6) One of the bandits in the Bandit Lord’s camp will drop a Potion of Mana.

7) After completing the Slay the Bandit Lord quest and taking the ledger back to Gerard he will reward you with a Tome of Strength.

The Defense of Strahnbrad Walkthrough

The village of Strahnbrad is completely defenseless so it’s up to Prince Arthas and his men to fend off the orc horde. Your first task is to get to Strahnbrad which is on the east side of the map. Before you begin pick up a few secret treasures in the start area.

The crate on the left side hides a Potion of Healing and the crate to the right holds a Scroll of Protection. Both could come in handy in a tight battle. Take the path leading to the south. 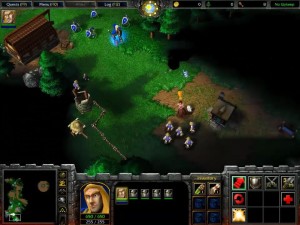 When the path turns to the east continue walking over the grass to the south. You’ll come across a distraught villager whose child, Timmy, has been kidnapped.

Those nasty gnolls have taken Timmy into the forest. It’s time to rescue him!

Continue deeper into the forest to the north-east. Before long you’ll come across the gnoll kidnappers.

Slay the gnolls. One of them will drop a Potion of Healing. Once they’re all dead Timmy will be freed and you’ll be given a Ring of Protection as your reward.

Go back to the path and slightly further along is an open space to the north. A villager there needs your help but as you approach he turns into a bandit and attacks with his friends. These bandits could actually kill one or two of your footmen so heal them up with Arthas when they start to get low on health. One of the bandits will drop a Scroll of Healing.

Follow the main path until you come to the bridge. Some of the villagers are being robbed by bandits. Follow the bandits into the forest in order to return the stolen ledger.

Head east into the forest. Three bandits will attack you as you cross the river. Pull back any of your troops that are taking too much damage to keep them alive for as long as possible.

Once across the river you’ll have to take on Menag with four of his goons. Menag shoots fireballs so this will be your toughest fight yet. Once you’ve killed them grab the ledger and the Potion of Mana. Take the ledger back to Gerard and he’ll give you the Tome of Strength. 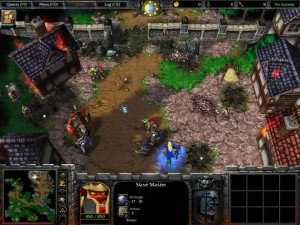 Just over the bridge is the village of Strahnbrad. Get in there and take out the orcs who have already started pillaging and looting. To the north-east is a Potion of Mana hidden in one of the crates.

You can find the Slavemaster to the north-west of town. He’ll send some orcs away with human prisoners leaving just a few orcs to battle.

The Slavemaster has 850 health but you should be able to take him out without too much trouble, completing this campaign.

Continue on to the second human campaign, Blackrock & Roll.