The Shores of Northrend

After culling the citizens of Stratholme Arthas takes the fleet to Northrend in search of Mal’Ganis. A month later Arthas arrives at the coast of Daggercap Bay.

Establish a Base Camp – Find a gold mine and build your base while keeping Arthas alive.

Destroy Mal’Ganis’ Base – Hunt down Mal’Ganis and destroy his base.

Rescue the Dwarven Base – Help out the dwarves who are under attack and you will gain control of their base as a reward.

1) Follow the path south-east from your start postion and kill the Dire Frost Wolf for a Scroll of the Beast.

2) An Orb of Frost can be found by killing the Nerubian Seer. It gives +6 frost damage.

3) One of the Ice Trolls drops a Potion of Greater Healing.

4) In the Ice Trolls tent is a Potion of Mana.

5) An Ancient Wendigo will drop the Gauntlets of Ogre Strength +3.

6) An Ice Troll Warlord just north of your base has the Manual of Health.

The Shores of Northrend Walkthrough

As you continue along the path you’ll face two more Frost Wolves before encountering a group of 5 Ice Trolls to the north. One of them will drop a Potion of Greater Healing. In one of their tents you’ll find a Potion of Mana.

Head to the north-west from the Ice Trolls camp to find a small group of spiders including a Nerubian Spider Lord and Nerubian Seer. One of them will drop the Orb of Frost. 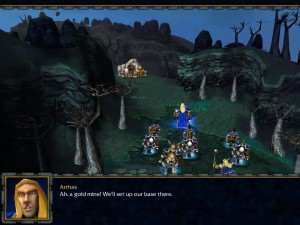 Continue to the east until you find the gold mine and have an encounter with Muridin Bronzebeard. He’ll ask you to help rescue his base which is at the very north-east of the map.

On finding the gold mine your base camp will be established. You’ll quickly be attacked from the north so keep your men up there.

Muridin is a level 5 Mountain King. He can hit flying units with his Storm Bolt.

Build some more peasants in this base and construct some more towers and riflemen. Repair the barracks, build a lumber mill and blacksmith.

You will be attacked fairly frequently by flying Gargoyles so make sure you have enough riflemen and towers to handle them. 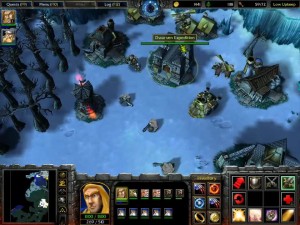 The northern dwarf base is being besieged by undead who have set up some towers and buildings in front of the base. To the west and between your base and the dwarf base is an Ancient Wendigo which drops the Gauntlets of Ogre Strength +3.

Send a force north of your base and take out the Ice Troll Warlord for a Manual of Health. The dwarven base is not being held captive by a large undead force. Just take out the Spirit Towers first and you should easily be able to remove the rest of the buildings.

Once you send a unit into the dwarven base you should gain control of it and be able to produce Steam Tanks.

Mal’Ganis has a base to the west of the dwarves. Send in an initial strike for of Arthas, 6 to 8 riflemen and some knights, followed by a second force with Muridin, steam tanks and whatever else you have at your disposal.

With your two heroes you should be able to quickly take out Mal’Ganis’ base to complete this mission. Continue on to the second last mission for the Human Campaign, Dissension.