After defending Strahnbrad Arthas meets Uther just before the orc encampment. The knights Uther sent out to parlay with the orc leader were killed so it’s time to prepare for the attack.

Establish a Base – Build a barracks, two farms and train 6 footmen.

Slay Searinox – Find the dragon hunters east of the base and slay the black dragon Searinox.

1) Scroll of Protection in one of the crates just north of the mine in the starting area.

2) There’s a Potion of Healing in one of the crates to the east of the camp.

3) After defeating Searinox take the Heart of Searinox back to Ferenor for the Orb of Fire.

4) A Potion of Mana in the west Gnoll camp.

5) A Potion of Healing in the east Gnoll camp.

6) You can find the Claws of Attack +3 from the Murlocs to the north-west.

7) One of the Murloc huts has a Potion of Healing.

9) Hidden in the north-west of the map is an Ogre Magi with the Gauntlets of Ogre Strength +3.

The first thing we need to do is establish a base and protect it from the invading orcs.You already have some peasants collecting wood so assign the rest to mine for gold. Train up a few more peasants for mining and building.

There are two entrances into the base, to the north and to the north-east. You’ll want to position your soldiers to guard these areas. 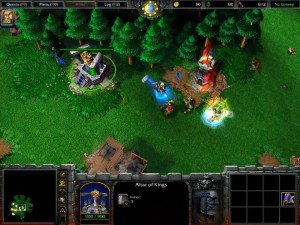 The first attack will hit the north-east entrance so send Arthas to deal with them. Uther can’t be controlled but he should help out with the attacks.

Repair the damaged towers and by now your barracks should be built.

Move Arthas and any footmen you’ve trained to the north for an attack by a couple of orcs and troll headhunters.

When you have the money you can upgrade your scout towers to guard towers to help thin the orc horde. 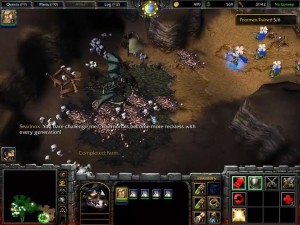 A little east of the base is Ferenor Steeltoe and his dragon hunters. Keep some units in your base to protect against the inevitable orc attacks.

Take the dragon hunters east and you’ll find Searinox a little to the south. He can do up to 100 damage per hit so make sure you have Arthas near to heal up the riflemen.

Make sure you have one inventory spot clear to pick up the Heart of Searinox. This can be taken back to Ferenor for the Orb of Fire which adds +5 fire damage and fire splash to your weapon.

The Blademaster is to be found in the north-east section of the map. Before you take him on you may want to grab the rest of the loot on this map.

In the north-west of the map is a small Murloc village. On of them will drop the Claws of Attack for +3 damage. From the Murloc camp if you continue to the north-west there is a hidden Ogre Magi who will drop the Gauntlets of Ogre Strength for +3 strength. You’ll need to chop down some trees to find him.

Likewise to the south of the map, also hidden behind some trees, is the Gnoll Warden with a Wand of Negation.

If your inventory still isn’t full, tear down the Murloc huts to find a Potion of Healing.

While you’re searching for loot keep training troops and building farms because the orcs will continue to send grunts and headhunters to attack you. 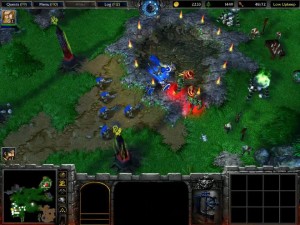 With Arthas, the riflemen and a few footmen you should be able to take out the Blademaster. Send your troops to the north-east, taking out the Grunts from the Blackrock Clan along the way.

The Blademaster is by himself but will create a copy of himself when you attack. The copy will do just as much damage as the real Blademaster so keep an eye on your troops health. Use a Scroll of Protection if you need it, otherwise cast Holy Light to heal up your footmen.

Defeat the Blademaster to win the campaign. The battle is only just beginning so move on to Ravages of the Plague to continue the story.