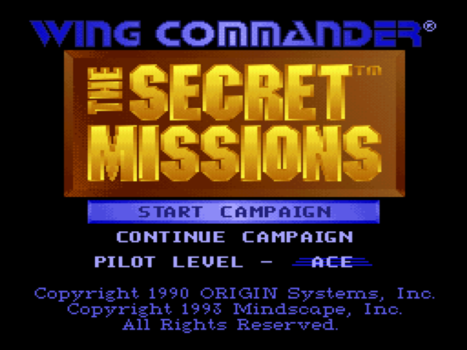 Wing Commander: The Secret Missions is an add-on to the original Wing Commander and was released in 1990. Unlike the original game it doesn’t feature a branching story-line. You must proceed from system to system until the Kilrathi are defeated. If you lose in any system you’ll be forced to complete the Retreat missions on the losing path.

The Tiger’s Claw has made its way to the Goddard System. When it arrives it finds the complete destruction of the Goddard colony. The Kilrathi have invented a new Graviton weapon which is mounted on a new class of ship, the Sivar-Class Dreadnought. You must destroy the Sivar before it wipes out any more human colonies.

If you fail any of the systems you will be taken to the Retreat missions.

The Secret Missions are the first expansion campaign for Wing Commander and follow the path of the Tiger’s Claw as it chases a fleet of Kilrathi deep into Kilrathi territory. The Kilrathi have designed a new capital ship that is capable of destroying entire colonies called the Sivar. Luckily it’s helpless against other space ships so once you catch up with it and destroy it’s escorts it isn’t too dificult to destroy.

The Secret Missions were released in 1990 and add an extra 18 missions to the Wing Commander game. The missions aren’t branching, apart from the 2 losing missions, so you’ll have to complete each one as you move closer to finding the Sivar.