Bald Mountain begins automatically at the end of Blood on the the Battlefield. Follow Ciri along the path towards the village where you’ll be invited to sit down and have a chat.

When you’re done talking continue up the path towards Thecla’s hut. Along the way you’ll bump into Johnny. Sarah will also be here if she was evicted from her house in Novigrad. Continue on to the hut and talk to Thecla. She’ll immediately accept Ciri as one of the Crone’s guests but reject Geralt.

You can change Thecla’s mind by performing a feat of daring. She’ll ask you to retrieve an Oren from the dark lake. This should be easy for a Witcher. Use the Killer Whale potion if you’re worried about how long you’ll be underwater.

Dive down and use your Witcher senses to find the Defier’s Oren. Pick it up and either head back to the surface and continue deeper into the tunnel to loot a chest. Return to Thecla’s hut and hand over the coin.

Dive down and use your Witcher senses to find the Defier’s Oren. Pick it up and either head back to the surface and continue deeper into the tunnel to loot a chest. Return to Thecla’s hut and hand over the coin. Thecla will let you pass through the gate.

As it turns out the coin was just a trick and the Crone’s servant Fugas will attack. He’s a similar race to All God but looks much more fierce. 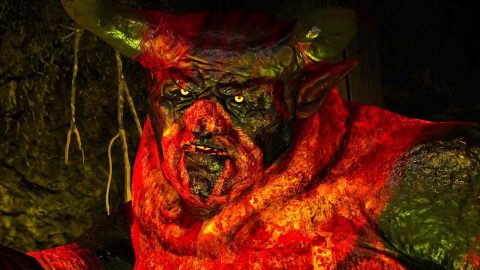 Once you’ve killed him Ciri will want to go and deal with Imlerith while you go after the Crones. Geralt disagrees and the two of you play “rock paper scissors” to decide who fights Imlerith. Geralt will win so Ciri will have to face the Crones.

Battle with the Crones

You’ll take control of Ciri. Make your way to the waterfall and drop down. You’ll interrupt the Crones while they’re cooking dinner. They’ll stop what they’re doing and attack.

This is a 3 versus 1 fight so keep using Dash to stay out of reach. When your stamina bar is full use the Blink ability by holding the Cast button to teleport behind each of them and attack.

Once the 3 Crones have been defeated a cutscene will play. The Weavess will get up, steal Vesemir’s Medallion and fly away.

Back as Geralt make your way up the mountain and you’ll come across a Quen Place of Power along the way. When you find Imlerith the battle will begin after a brief chat. 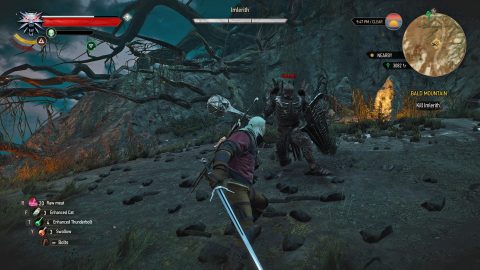 For the first phase of the fight Imlerith will use a Mace and Shield. Roll around to the side or back and get in a few swipes before rolling away. This phase is fairly easy. Once Imlerith gets down to about 1/3 health he’ll throw away his shield and just use his Mace as he teleports next to you.

Keep Quen active just in case you get hit and then dodge or roll away when Imlerith teleports next to you. Take a couple of swipes at him and then dodge away again.

After the fight Ciri will return. You have the choice to leave straight away or look around. It’s better to stay and look around because you’ll find a Magic Acorn on Imlerith. This item grants 2 skill points. If you leave you can come back and pick it up later.

You’ll head with Ciri back to the Chameleon in Novigrad. After catching up with your friends the quest will end and you’ll be free to pursue other quests.