Meet up with Yennefer at Crippled Kate’s to get started with this quest. She’ll ask you who suggested confronting Imlerith. No matter what you say she’ll approve of your decision. Yennefer tells you she’s waiting here for a man, Abbe Faria, who escaped from prison. Maybe he has some idea how to break in to the Oxenfurt prison.

Soon enough the man will arrive. After a brief chat with him he’ll run away. Chase after him and cast Aard to stop him. If you take too long Yennefer will teleport over to him and catch him herself. The three of you return to Crippled Kate’s and he’ll tell you everything he knows.

Breaking in to the Oxenfurt Prison

You can optionally ask Zoltan to help get the guards drunk to make getting in a little easier. If you’ve completed Now or Never he’ll refuse as the guards are on the lookout for non-humans.

Follow Yennefer to the entrance to the ruins. You’ll need to dive into a well and to get there. Yennefer will give you a trinket so she can track you. Obviously Yennefer isn’t going to go through the sewers herself.

Once you reach the ruins you’ll find a stone door with the handle missing. You’ll find the Handle in one of the other rooms. Bring it back and open the door. Use Aard on the breakable wall beyond the door and take out the Necrophages on the other side. After going through the ruins you’ll reach the sewers. A hole in the wall will take you into the prison.

Take out the Witch Hunters and search around for the prison cell with Margarita. You’ll need to find get the Prison Key from the Warden. Head up out of the dungeon and fight the guards above. It’s a tough fight with the Prison Warden and lots of Witch Hunters in a confined space. Do you best to take them out and when you’re done loot the Warden for the Cell key. 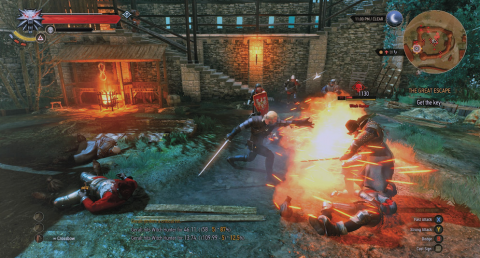 Go back and open the cell door to free Margarita. Yennefer will teleport in and teleport both of them away. You’ll need to find your own way out. If you’ve found the Sewer Key along the way you can go back out through the sewers, otherwise you can just jump over the wall to freedom.