You’ll be under attack as soon as you start this mission. Group your forces together destroy the enemy tanks. Sell the walls to the south of your base so the Ore Trucks can reach the fields to the south.

Start repairing your buildings and bring all your forces to the west and north a little to take over or destroy the tan base before it gets established. Build a few SAM Sites as you’ll be attacked by Choppers. They’ll target your Tesla Coil first so you may not be able to keep it intact.

Board 5 Infantry into a Transport and send it along the river to the west and then up a little. It should survive any attacks from Allied boats if you’re quick. Drop the troops off on the southern edge of the western bridge and keep them there to stand guard. Position shown in the image below. 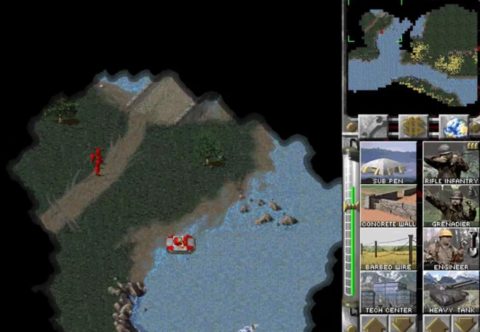 You may want to send another 5 Infantry just to be sure as you’ll be flushing out the Cargo Truck and it will try to escape by heading south along this bridge.

Protect your base and build up a force of around 20 Heavy Tanks, with a few Mammoth Tanks if you have the technology. Send them north and then west. You don’t need to destroy all the Allied structures, you only want to flush the Cargo Truck so that it drives along the western bridge. When you reach the Allied base you may see it zipping out to the west.

The Cargo Truck will soon cross the bridge into your waiting troops who should promptly destroy it, completing the mission.