For this mission you have an island to yourself and plenty of resources. The difficult part will be sneaking a Spy into the enemy Rehab Compound and then bringing Kosygin back to your base without being spotted by the Soviet Dogs.

Begin by building the usual Construction Yard, Power Plant, Ore Refinery and Barracks. Next go for the War Factory and build a few more Ore Trucks as there is lots of ore on this island. 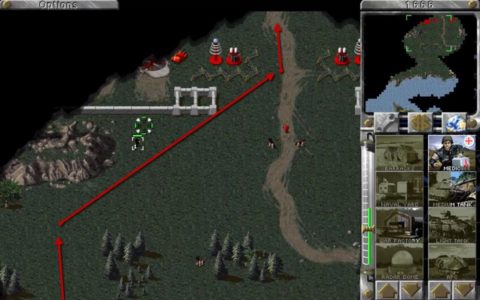 The Compound that you need to infiltrate is in the center of the base, to the left of the Construction Yard. Once you send the spy inside the building Kosygin will come out. You’ll need to help him escape. Don’t move him for now. If he tries to leave the base the dogs will be released. You’ll also be given a few Battleships as reinforcements.

Build around a dozen Medium Tanks and Rangers and send them across to the shores of the Soviet Base. Have the Battleships there as well as they have a long range over land.

Send your forces into the Soviet base to cause a distraction. Try to run over or kill as many dogs as possible. With the Soviets distracted run Kosygin out of the base and towards the nearest Transport.

With a bit of luck he’ll make it back to your base and the mission will be complete.